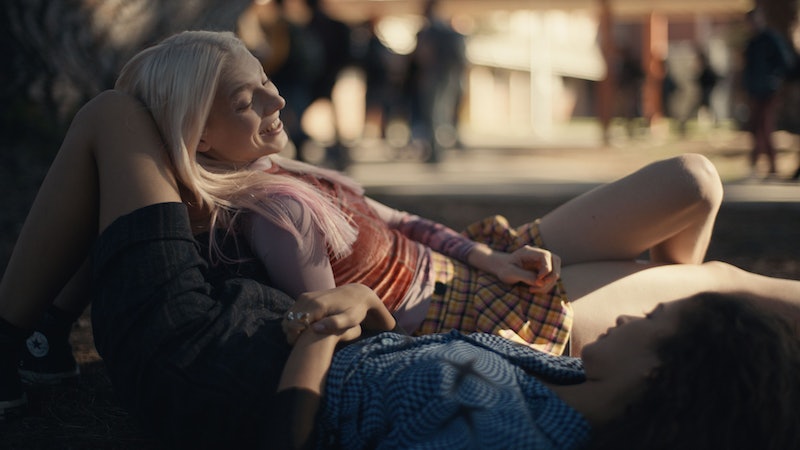 If you're looking for a little change-up to your regularly scheduled programming, allow Pride Month to inspire the way you fill up your queue. Now is the perfect time to binge watch some of the most inspiring and iconic LGBTQ shows television has to offer, whether you're seeing for the first time or revisiting old favorites.

TV has come a long way over the last 20 years, with LGBTQ characters not just becoming more visible, but an integral part of storylines. Some shows offer a nod to the history of the culture and how it paved the way for entertainment today while others explore what it means to be a young person questioning their gender or sexuality today. But one of the coolest things about the way television has evolved is that such stories are more mainstream. Those in the LGBTQ community can see themselves reflected in such diverse depictions, and those who are seeking to learn more are given access and context to do so.

Pride is a great time to catch up on some of these shows (and movies!) — from docuseries to sitcoms — but don't stop there. Supporting LGBTQ entertainment year-round helps to pave the way for even more stories and more roles that don't just benefit the community, they'll benefit the world at large by offering enlightenment and education. And while streaming some of the 12 shows ahead is a great way to celebrate now, you'll likely want to watch these for years to come.

Based on ball culture of New York in the 1980s, this drama on Netflix offers laughs, tears, and impeccable costume design, plus it's got Emmy-winner Billy Porter in addition to a cast that proudly boasts a ton of trans talent.

This Showtime series, which first ran from 2004 to 2009 and then had a brief comeback with the more recent Generation Q late last year, was pretty groundbreaking. The show focused around a group of diverse, successful gay and bisexual women — as well as one of the first trans characters on TV — living in West Hollywood during the early 2000s.

Going 12 seasons (plus five All Stars seasons) strong, Drag Race has become an undeniable juggernaut. But if you assumed this reality competition show was just about looking flawless on the runway, think again. As Ru Paul is quick to remind the queens — and viewers — drag is an inherently a political act, and the series offers some introspective moments into the struggles of LGBTQ people and highlights the art of drag (and its ongoing evolution) all the while entertaining with "charisma, uniqueness, nerve, and talent."

Originally based on true events, this award-winning Netflix show features an eclectic crew of women living in a minimum security prison.

In this Starz series, two vastly different Mexican American sisters move back to their childhood home in Los Angeles after their mother's death (who they later find out was in a romantic relationship with a woman). Not only are they forced to confront their past, but to reimagine their future.

Think of this docuseries as an even more cinematic — and often even more emotional — Queer Eye. Three drag queens (all formerly of Drag Race) visit a series of small, largely conservative American towns where they put on a show starring members of the community — from straight cis men to outcasted LGBTQ folks — who are looking for more than a makeover, they're attempting to break free of stereotypes and learn to be their most confident selves.

In this hilarious Canadian comedy that first appeared on Pop TV and is now available on Netflix, the well-to-do Rose family falls from grace and is forced to move from the big city to a small town. Besides the wacky family dynamics, one of the most endearing aspects of the show is the honest, relatable exploration of David's sexuality as the series progresses.

When this reboot of Queer Eye for the Straight Guy was first announced, some were skeptical. But the Netflix version was filled with just as much heart and humor as the original. As a modern twist, the new QE isn't just focused on making over straight cis men, but those from all walks of life who could stand a deep lesson in self acceptance.

This HBO drama centers around Rue, a young woman searching for identity and meaning — which includes an exploration of her own sexuality in a complicated dynamic with her friend Jules, who identifies as trans.

Though this Netflix show, which centers around the straight, cis son of a sex therapist mother — who starts his own business advising fellow students on sex — his gay best friend's romantic storylines are some of the series' highlights.

LGBTQ Show: Tales Of The City

In this Netflix limited series, a woman returns to her former home in San Francisco, a commune of sorts centered around a beloved LGBTQ activist and icon — and the varied stories of the inhabitants beautifully unfold.

You might not immediately think of this hilarious Comedy Central sitcom as an LGBTQ show, but that's a testament to how it normalizes sexual fluidity. Over five seasons, both Abbi and Ilana — platonic best friends — explore life and love and friendship in New York City through a constant series of hijinks.