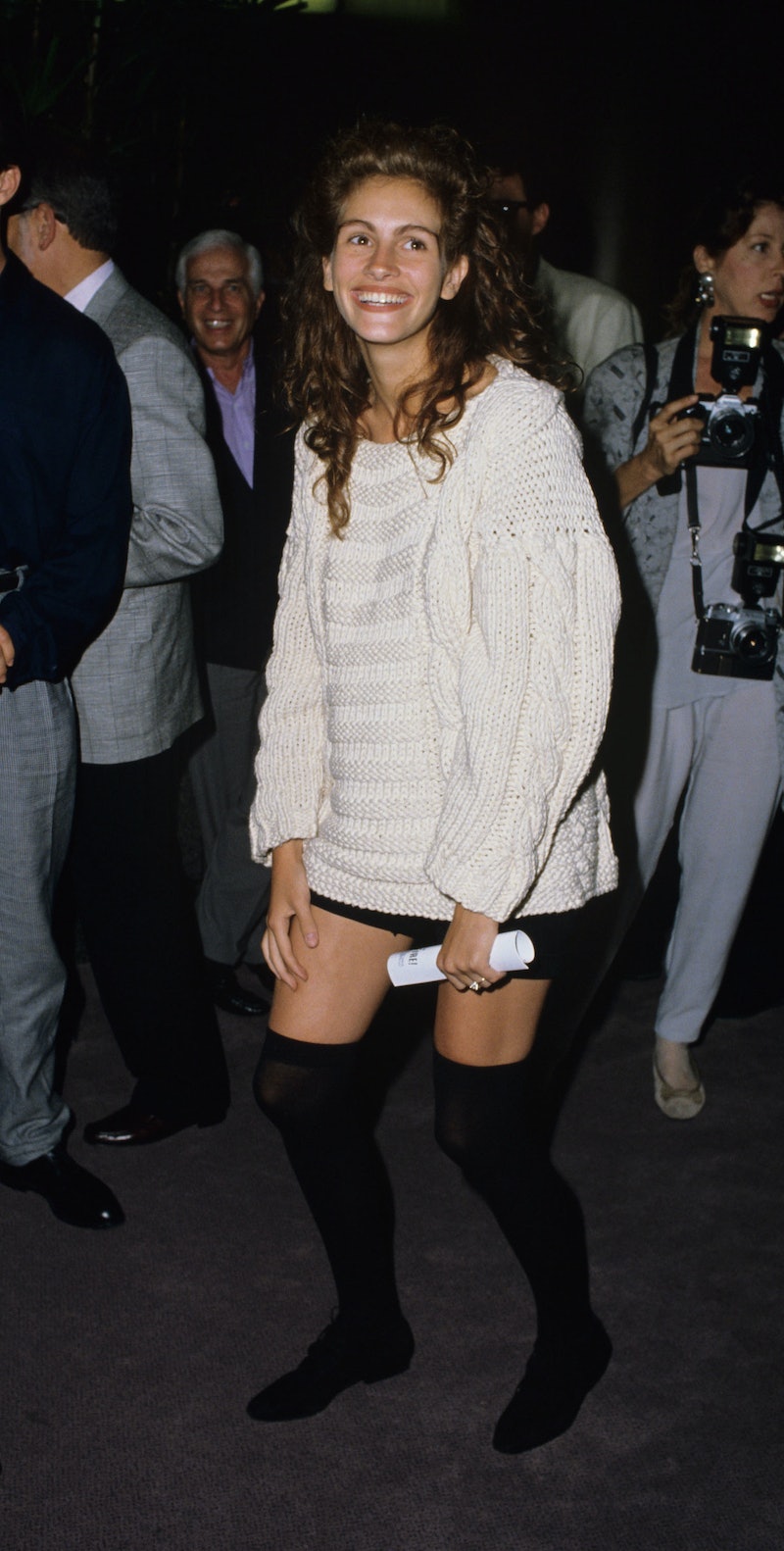 In case you haven't heard, America's on-screen sweetheart turns 53 today. Best known for her megawatt smile and shock of curls, Julia Roberts is more than a seasoned actor with a replete résumé — she came to define American cool girl style in the '80s and '90s. Her style file comes with a certain je ne sais quoi that fashion fans have sought to nail for decades. Whether in a three-piece suit or a cable-knit sweater, each look is feminine, playful, and polished — without the upscale pageantry that typically follows a Hollywood star. In honor of her birthday, TZR's walking through all of Julia Roberts' best looks (particularly, the lesser-known ones) — all of which are just as relevant today.

Between red carpet looks (which Roberts always approached with a relaxed panache) and street style moments, the Pretty Woman darling pulled off dozens of flawless ensembles. Following her breakout role in Mystic Pizza, Roberts kept with oversized suiting, slouchy knits, and sensible shoes. As the '90s rolled around, longline vests gave way to cropped blazer dresses, heeled croc-effect boots, and leather jackets. There were even a few looks in which Roberts co-signed the pre-Y2K grunge trend — which, then turned to bubblegum pink cardigans as soon as the aughts rolled around. Even while playing with shifting trends, Roberts always placed her own fresh take on every look, making them all the more worthy of careful review.

To browse her best from the early years, read below:

After winning the Golden Globe for Pretty Woman in 1991, Roberts wore a pinstriped navy skirt suit with a pair of simple gold charm earrings.

In the same year, Roberts was spotted hanging with then-boyfriend Kiefer Sutherland in LA, wearing a casual, quirky look — a camel-colored button-down, blue jeans, and a flower-embellished felt hat. Net net: Roberts co-signed the "shacket" trend long before it emerged in 2020.

Wearing a pair of brogues and knee-high stockings, Roberts went with an oat milk latte-worthy sweater for the Great Balls of Fire premiere in 1989. Needless to say, film screenings were far more casual back then. With chunky knits seeing a major uptick in 2020, this look is well worth drawing inspiration from today.

For an afternoon lunch in late-August LA heat, Roberts went with a floral minidress with scalloped lace cap-sleeves. To add an '80s-worthy punch to the look, she tied in thick white tube socks with her shoes.

For the premiere of Sleeping with the Enemy, Roberts chose a suede skirt in a geometric print and paired it with a black sweater and matching heeled mules. The look rivals Rachel Green's go-to work outfit, with pearl strands bringing on a mid-century twist.

For her Steel Magnolias win, Roberts wore a grey zoot suit with a purple floral tie and a white button-down. The ultra gender-neutral look was well ahead of its time.

Rivaling the polka-dotted straw hat that Roberts wore in Pretty Woman, Roberts fashioned it for evening wear with a matching vest and trousers, all of which foretold 2020's chocolate browns trend.

Speaking of chocolate browns — Roberts wore the same shade for the premiere of Hook in Los Angeles. This time, she went for the suit jacket and matching pants in a feminine tailored fit that juxtaposed her slouchy style from the year prior.

For the premiere of Red Corner, Roberts wore several pieces that would totally fit in today — square-toed boots, leather pants, and a shoulder bag ranking high among in this particular look. Plus, a biscuit-hued blazer coat that synced with her lightened locks.

Here, in 2000, Roberts wore a fluorescent printed dress that rivals Versace's Spring/Summer 2021 runway. She styled it with patent leather croc-effect boots, which Emily Ratajkowski still wears a version of today.

Nailing another one of 2020's finest looks, Roberts wore the leather-everything trend to the premiere of The Mexican, which is still alive and well today.

Last but not least, we have Roberts' most iconic moment — her red sequin dress moment at the Notting Hill premiere in 1999, which is forever cemented in the annals of red carpet fashion. The reason? First, her dress was fabulous — and second, it inspired thousands of women to ditch shaving. The seminal look practically signaled the start of the new millennium, and it's been a sartorial reference point ever since.