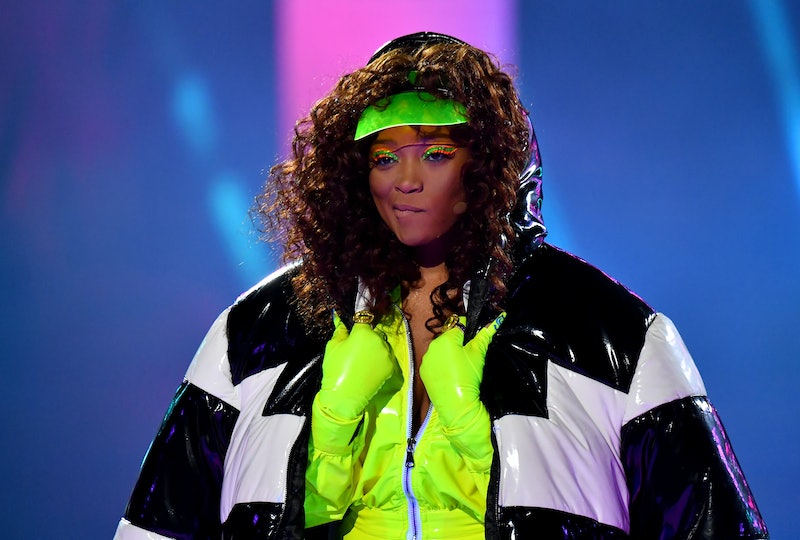 This year's MTV Video Music Awards, no surprise, wasn't the usual dazzling fanfare you're probably used to seeing. But despite the empty auditoriums and absence of red carpet appearances and overexcited fans, when it came to rocking MTV Video Music Awards beauty looks, it was business as usual. From neon eyeliner to rainbow hair extensions, celebrities still brought the same A-game that they do every year.

All the featured stars worked hard to make the most out of the Aug. 30. event, which adopted a digital twist. But what it lacked in normalcy was made up for in stunning makeup, hair, and nails. Although the colors and styles ranged dramatically, after careful review, it's clear there were two particular trends that completely dominated the red carpet and stage this year: the cat-eye and extra-long hair.

Embracing the eye makeup trend that's lasted for decades were stars like Miley Cyrus, who selected a classic cat-eye and red lip, and Bella Hadid who created an edgier version with smudgy black liner on her bottom lash line. Even host Keke Palmer's eyeshadow during her neon-coated performance fell into the familiar winged shape.

Super long hair was everywhere, too, and whether it was Doja Cat's modernized Rapunzel-like braid or Ariana Grande's Sailor Moon-length pigtails, extensions clearly would've won the award for most popular hairstyle at the VMAs.

Below, see the looks that will be on your mind for the rest of the year, and probably provide some at-home inspiration, too.

While she donned an ultra-long braid on the red carpet, celebrity hairstylist Jared Henderson created a wig of green-tinted platinum blonde waves for Doja Cat with the help of dye and other products from Joico. This served as her performance look, and with it she donned an iridescent space-inspired bodysuit with vibes that weren't too far off from Gaga and Grande's "Rain On Me" looks.

Gaga's beauty looks alone deserve an entire article dedicated to them. Her makeup artist Sarah Tanno found an eyeshadow look that managed to play perfectly well with all of Gaga's unique dresses and steam punk-inspired masks throughout the night. Using Haus Laboratories products, Tanno selected Eye-Dentify Gel Pencil Eyeliner in Antique Rose to swipe all over Gaga's eyes, then sharpened the look by using the same gel eyeliner and Liquid Eye-Lie-Ner, both in the color Punk.

For her hair, the icon left the creativity up to Frederic Aspiras, who used Joico products to color her the strands an opalescent mix of aqua, lavender, pink, and silver and ghd hot tools for styling those barely-there waves.

Hosting and performing, Palmer switched between a few gorgeous outfits, hairstyles, and eyeshadows over the course of the evening. Arguably, her most standout look was the neon glitter lids she had done by celeb makeup artist Mimi Kamara for her performance of "Snack," which matched the neon visor and windbreaker/bodysuit combo she wore.

The look was made up of highlighter orange eyeliner that defined a strip of sparkling green eyeshadow between. Kamara topped it off with gravity-defying lashes and what seems to be a swipe of blue eyeliner on the bottom.

Sharing the stage with Gaga for a rendition of "Rain On Me," the pop singer wore long, ombré pigtails done by hairstylist Josh Liu, identical to the style she hinted at several days before the performance on her Instagram feed.

Even though she's tried several looks leading up to the actual show, makeup artist Michael Anthony stuck with a whimsical wash of sparkly white, using Haus Laboratories' Eye-Dentify Gel Pencil Eyeliner in Aura and, like Gaga, the same product in the color punk.

During quarantine, Hadid proved her know-how when it comes to creating the perfect cat-eye, and the model brought the look back for the red carpet. Her affinity for '90s style shone through thanks to stylist Evanie Frausto, who created her spiky bun. Her makeup was equally a tribute to the grunge era, but makeup artist Erin Parsons gave it a glamorous twist with clean, soft lines and muted colors.

That's not all though — Hadid's nails can't go without recognition. Artist Mei Kawajiri created a nude, almond-shaped manicure for her, which was an updated and red carpet-worthy twist to that decade's love for beige.

Nails made by nail artist Sojin Oh, Rexha's manicure went to extreme lengths featuring blue-tinged metallic extensions. She had her square-tipped set of claws paired with a super sleek high ponytail and dramatic side bang, which was courtesy of celebrity hairstylist Iggy Rosales for Dove Hair. Rexha was also another star who worked a smoky cat-eye, created by Samuel Rauda.

Cyrus' one-of-a-kind stylish shag haircut was smoothed and straightened for the red carpet by celebrity hairstylist Bryce Scarlett, who also gave her bangs some piecey texture.

Her makeup on the other hand couldn't have been more classic. Makeup artist Janice Daoud opted for a black cat-eye with impeccably sharp wings and a bright cherry red lip, giving Cyrus a bit of a young Annie Lennox vibe.