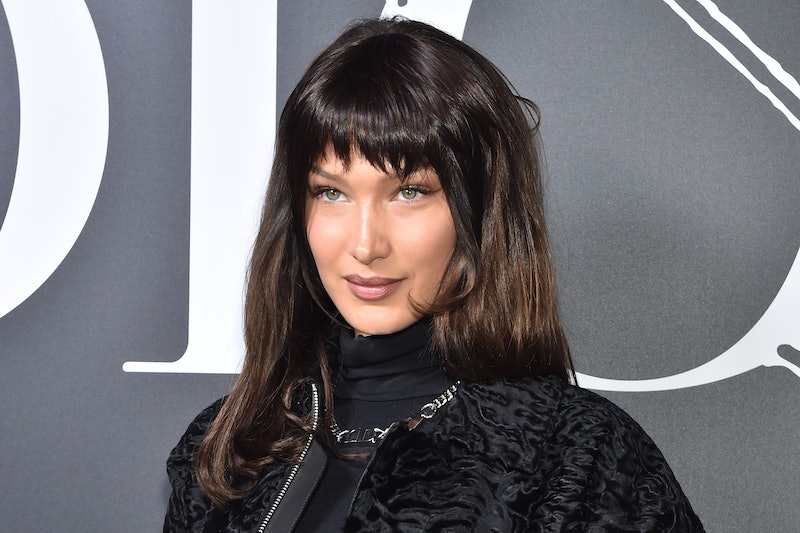 The uninspiring act of flipping burgers has never looked so fashionable as when Bella Hadid does it in a '90s lob with bangs. The video she posted on Instagram — featuring her dancing in front of a rack of tie-dye T-shirts with a spatula in each hand — is 20 seconds of pure summer weekend bliss. There are several layers of coolness to this clip, but the highlight of the whole thing is obviously the wig.

Hadid's hair has been a frequent topic of conversation in quarantine. In April, she cut her own (and her friend's) bangs, then, a month later, photos emerged of what would have been the model's Met Gala look. Makeup artist Sam Visser made the big reveal via Instagram after this year's annual fashion extravaganza was cancelled. It showed Hadid in surprising strawberry-blonde waves, straight-across bangs, and doll-like freckles.

Now, the 23-year-old is wearing what seems to be a wig during a late-night barbecue session. In the experimental look, Hadid sports a below-the-shoulder lob, flipped in at the ends in classic '90s style, and a thin layer of short, erring-on-micro fringe to go with it. Hairstylist Glen Coco (né Oropeza) likened it to a Kill Bill-era Uma Thurman.

Whatever the inspiration behind it, the presumed wig looks to be a decades-old relic, one more piece of evidence that proves Bella Hadid is the '90s icon that never was. Her undying love of the grunge era is further exemplified by her prominent face-framing tendrils, her sky-high ponytails, and the way she rarely takes her hair out of a claw clip.

This bouncy lob — reminiscent of a look Topanga Lawrence may have worn in Boy Meets World — is sort of like a throwback to the historic blunt bob with bangs that Hadid debuted at the 2017 CFDA Awards. Unfortunately, it's probably just as temporary, too.

The retro style is entirely wearable, in any case. Low-maintenance lobs are becoming a major summer 2020 trend — one that Venus Williams has been sporting — and this one is Bella Hadid-approved.