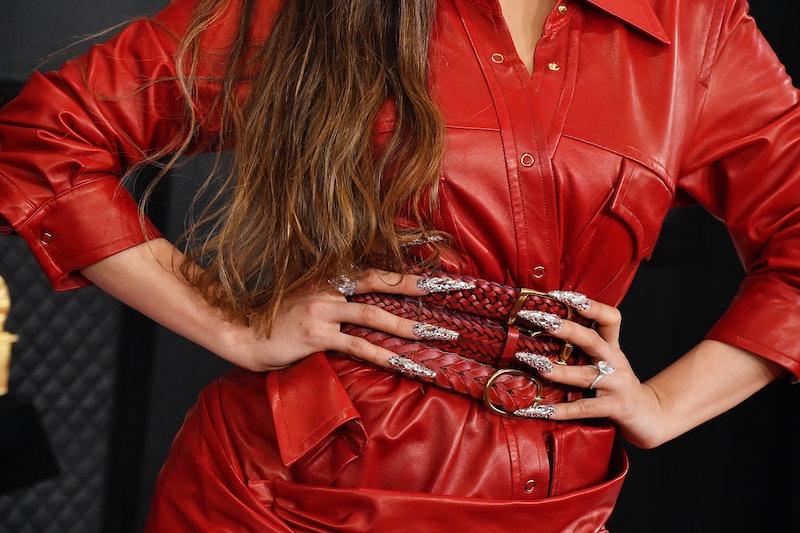 While many celebs opt for nude manicures on the red carpet, there are still a fair share of A-listers that like to go all out. And with the nail looks at the 62nd Grammy Awards as proof, it might be time to spice up your own nails, too. Luckily, the award show's attendees are serving up ample inspiration that can be recreated in a more understated way (or not) at home.

Whether you prefer a more minimal hue, like your nails long and fully embellished, or land somewhere in between, the red carpet is always a great place to start when looking for a fresh new set. On Jan. 26, some of the biggest names in the music industry showed up to the STAPLE center in Los Angeles looking as stunning as ever. But opulent dresses aside, some of the night's biggest stars had the most over-the-top nail looks to match. Nominated for her hit album, Truth Hurts, Lizzo leaned into the glamorous feel of her first outfit for the night with crystal-embellished nails dripping from each end. While fellow nominee, Rosalia's fringed leather dress is elevated with a sequined rhinestone mani and shimmering accessories.

But even if you're hesitant to try out these more extravagant looks for yourself, there's an assortment of polishes on the market right now that will offer the same effect. Which means, even if you consider yourself a minimalist, try swiping any one of the polishes below over a neutral tone for an instant elevated feel.

Just ahead are TZR's favorite looks of the night and they're totally worth bookmarking for later.

The Grammy winner arrived with silver, stone-encrusted 3-D nails that felt so extravagant.

Inspired by her eight nominations of the night, the singer's manicurist Eri Ishizu created a glitter "8" design on each nail, with dangling crystals at the end.

Lipa's playful manicure can be recreated with a polka-dotted polish that'll give you texture and a multi-colored finish with one coat.

Although subtle, Keys' black French mani was not to be missed.

Rexha's long dagger-like nails had an almost demure look, thanks to their baby pink hue.