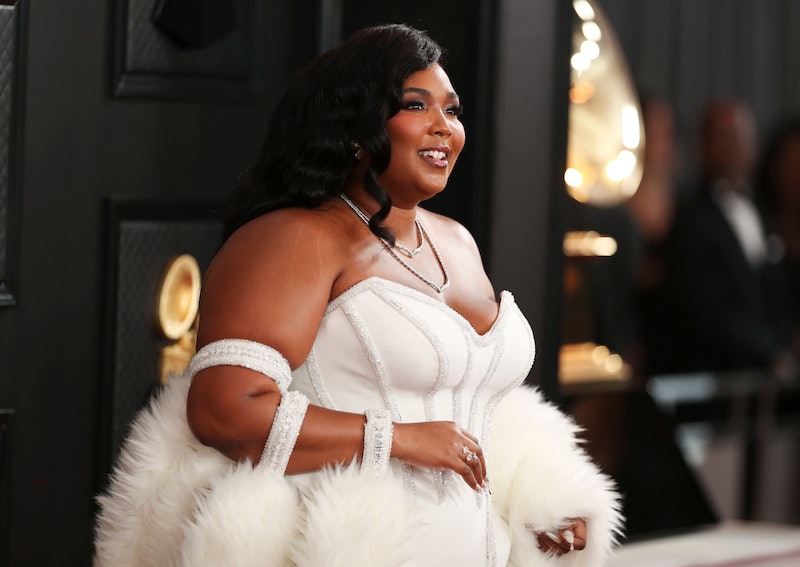 This year's award show season is well underway and so far, there's been no shortage of stunning ensembles to grace the red carpet. But when it comes to the looks at the 62nd Annual Grammy Awards, there were more than a few that were just as polished, while maintaining the occasions innately playful spirit. And because, some of the most iconic moments in fashion have taken place on the Grammys' red carpet (from Jennifer Lopez's epic Versace dress in 2000 to Rihanna's powder pink Giambattista Valli gown in 2015), it's no surprise that 2020 would bring another round of winning looks that are sure to be remembered for years to come.

Award shows like the Critics' Choice and Golden Globes tend to call for more formal attire. However, on Jan. 26, celebrities arrived to the STAPLES Center in Los Angeles wearing looks that could only be worn to the Grammys. For instance, offering a more playful approach to red-carpet style, Jameela Jamil showed up in a beautiful tiered gown by Georges Chakra, which was designed in a bright shade of blue that matched her beauty look for the night. In line with the Old Hollywood trend that's been quite popular this season, Lizzo wasn't afraid to take a risk in an all-white look by Atelier Versace — complete with a crystal-embellished furry stole.

Of course, there were an assortment of risqué looks, too, but the best outfits of the evening were fashion-forward with a refined finish to match. Just ahead are TZR's top picks of the night — and they absolutely can't be missed.

Aligning with the Old Hollywood trend making waves during award show season, Lizzo decided on a fitted Atelier Versace gown, complete with accessories that are equally as luxe.

Ariana Grande shut down the red carpet in a custom cloud-like gown from Giambattisa Valli.

Maggie Rogers sported an understated gown from Chanel that was decorated with metallic star appliqués.

FKA Twigs stayed true to her unique sense of style in a custom gown by Ed Marler.

On trend with all the citrus hues being worn on the red carpet, Teigen looked amazing in a ruffled gown by Yanina Couture.

The Grammy's host wowed in her first look: a slinky, silver one-shoulder gown by Versace.

The actor stunned in a Valentino gown from the designer's SS19 collection.