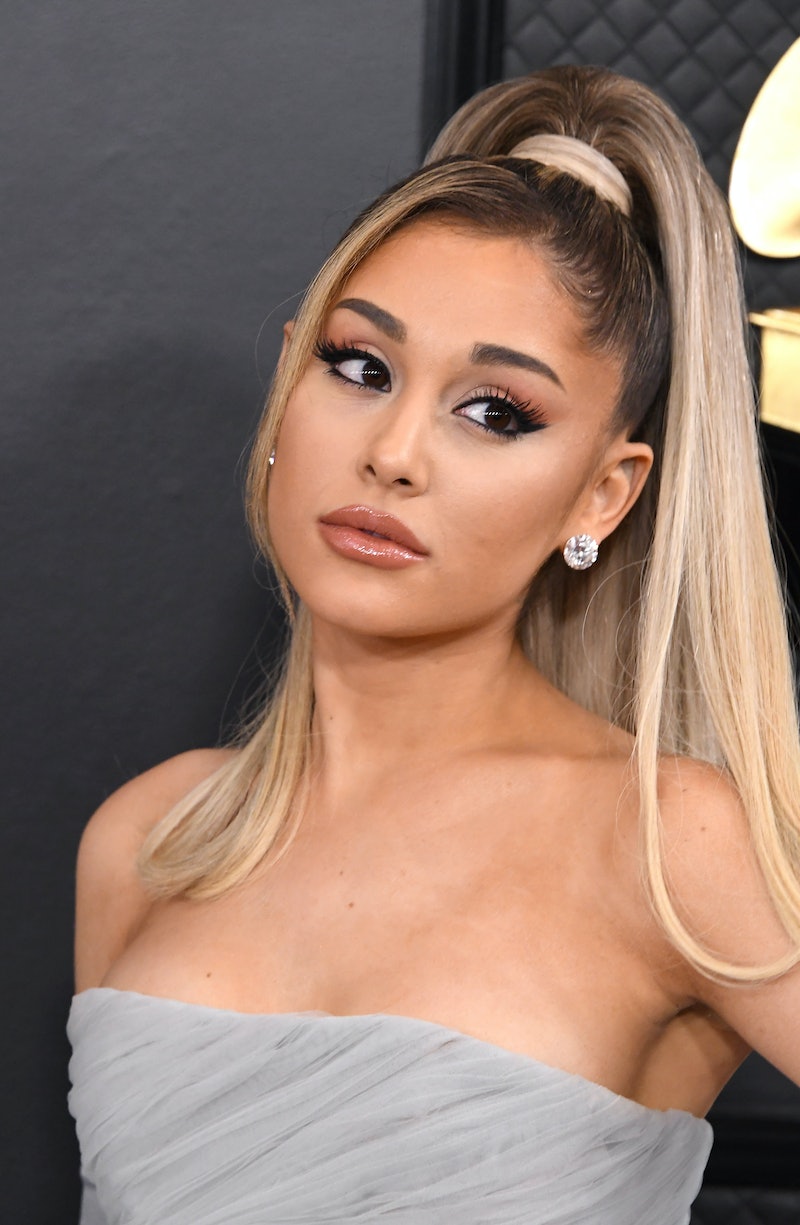 For the 2019 Grammy Awards, Ariana Grande's absence was *very* noticed by fans. Though she posted a photo on Instagram in a satin light blue custom Zac Posen dress she would have worn, it was not a worthy substitute for seeing it in all its glory on the red carpet. In an effort to make up for the disappointment felt round the social media world last year, Grande went big with her 2020 Grammys dress, sporting the ultimate princess look on the red carpet.

Considering her impressive five nominations, it seems the pop star had plenty to celebrate and for which to dress the part — and dress the part she did. Yes, Grande (nominated for Best Album, Best Pop Vocal Album Record Of The Year, Best Pop Solo Performance, and Best Pop Duo/Group Performance) gracefully strolled the carpet on Jan. 26 at STAPLES Center in Los Angeles wearing a voluminous gown by Giambattista Valli. The silvery grey masterpiece resembled actual clouds, featuring endless tiers of lovely ruffles. Grande truly looked every bit the pop princess.

Knowing that the beauty is truly in the little details, Grande topped off the regal look with an elegant pair of matching gloves (which also seem to be an award season trend, as per Zoë Kravitz's 2020 SAG Awards look). Although her shoes weren't visible under the custom gown, the musical artist walked the carpet in a pair of luxe Christian Louboutin heels. Jewelry was kept simple and pristine, with the pop singer sticking to diamond stud earrings and nothing else.

In addition to her dreamy dress, Grande sported an equally ethereal beauty look, which included her signature high pony. Her soft, neutral makeup was more on the minimal end of the spectrum, giving all the attention to her ruffled dress. Unsurprisingly, the singer showed up in her classic jet-black cat eye, proving that if a beauty look isn't broke, there's no need to fix it — the magic will continue to happen.

Did you miss the red carpet vision? Below, see the breath-taking look in all its glory for yourself.