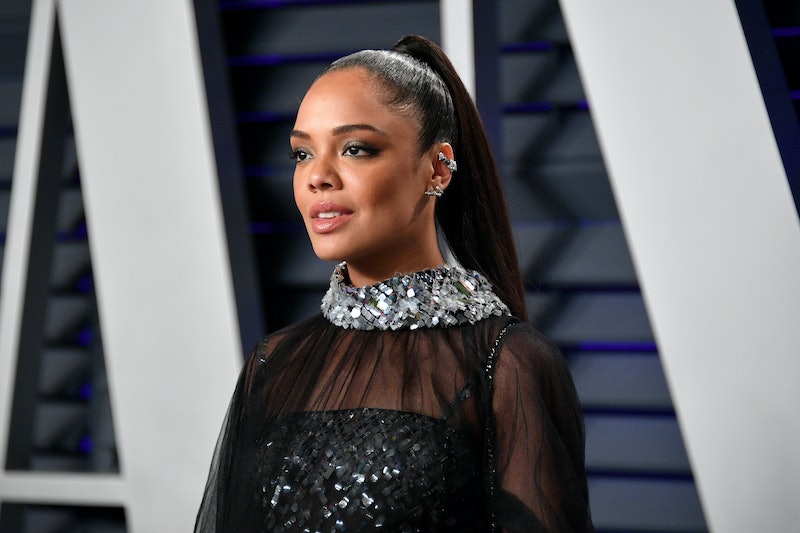 Tessa Thompson continued her marathon as a beauty tastemaker in London on Sun., promoting her forthcoming film, Men In Black: International, alongside co-star Chris Hemsworth. The latest aspirational hairstyle in the actor's growing beauty arsenal? Tessa Thompson's futuristic space buns, courtesy of celebrity hairstylist Lacey Redway. The asymmetrical look put a new-age spin on the '90s-inspired hair trend, further proving the BlacKkKlansman star's ability to serve sophistication alongside even the most eccentric hairstyles.

With her shiny tresses blown out to a sleek finish and parted on one side, Thompson's wispy buns served as a playful accent to her shimmery Lanvin outfit. Lending a youthful twist to the experimental shirt dress from the French luxury label, the quirky hairstyle demonstrated the serious staying power of '90s-inspired beauty. And whether Thompson is rocking pearl-adorned box braids, natural curls, or that floor-length braid-turned-whip from the 2019 Met Gala, the actor has a way of flawlessly pulling off an impressive range of hair looks.

Keeping her makeup minimal with neutral matte eyes and lips, Thompson's understated look posed a stark contrast to the bright berry lip color and mixed Versace prints she wore while continuing promo for the film during a visit to BBC Radio the next day.

Inspired by centuries-old traditional bantu knots from the Zulu people of South Africa, the hairstyle emerged into the Western mainstream in the '90s, appearing on the heads of everyone from "Scary Spice" Melanie Brown and Björk. Remaining a staple in pop culture beauty to this day, the wispy buns have been updated and reworked by countless modern tastemakers, including Yara Shahidi and Janelle Monáe.

The free-spirited hairstyle is perfect for summer, so give the actor-approved look a whirl, and start by shopping The Zoe Report's product picks to achieve it, below.

After spraying hair with a heat protectant of your choice, press strands into a sleek and shiny finish with this top-rated flat iron from Ghd.

Add a few spritzes of this dry oil for a healthy sheen.

Grab your go-to gel and slick down baby hairs with this toothbrush for extra snatched edges.