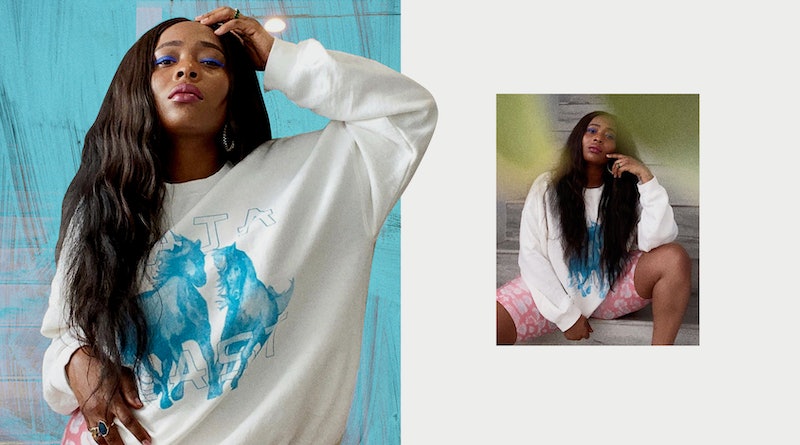 "As a stylist, and a Black stylist, we want people to be more conscious and recognize that this time was granted to us as an opportunity to be still, but also to change," stylist Ade Samuel tells me over a Zoom call. She's spent the last few months holed up in her home in Los Angeles, reimagining not only her own work, but also that of the fashion industry at large. "If you're coming out of this as the person you came into it as ... it's like, damn you're stuck."

The fashion industry is in the midst of a reckoning. The economic effects of COVID-19 have led to store closures and bankruptcies. At the same time, the protests that have risen from the killings of Black men and women including George Floyd and Breonna Taylor have also led to a larger call for accountability and inclusion within the fashion industry. For Samuel, whose clients include celebrities like Justine Skye, Michael B Jordan, and Naomie Harris, coming up in the industry, racism — both overt and systemic — was always an issue.

"From the very beginning, as a Black woman, you experience racism so much that it's almost like we're taught to practice not being triggered [by it]," she explains. "The first eye-opening experience was working with a renowned editor who rejected me in a position that I was deserving of solely based on who I was and my skin [color]. There was no interaction for her to make a judgement call on releasing me from a position that everyone voted for me to be in." Samuel explains that growing up in her neighborhood of the Bronx, she was taught early on of the existence of such racism, taking on a mentality of "I have to be a driving force and plow my way through it and not fold."

After this experience, Samuel recalls a sense of determination. "I did not let it defeat me, that's why I'm here today in this position," she explains. "I didn't feel angry then, I just took it for what it was [...] unfortunately, as Black people, we have to accept these types of things because, if we don't, the backlash is [that], until recently, most people would never have been on my side. They would have never wanted to cause friction at work, they would have just followed the corporate world as it was." In that moment, Samuel didn't feel angry or upset, but moved forward determined to succeed. "I had to show [that editor] that she was missing out on me as an employee."

Samuel was always interested in fashion, spurred early on by the costumes she saw on TV and in the movies. "I really love the aesthetic of costume design and what they do and how they build out characters," she says. "As I was watching films, I would be re-sketching outfits." A Different World, Clueless, and Moesha served as early inspiration, as did the music videos of artists like Mary J. Blige, Lil' Kim, and Ashanti. "I watched old movies, like a lot of Goldie Hawn movies," she recalls. "Death Becomes Her was a big fashion one for me because it was all glamour, but I also liked the darkness of it all."

Eventually, Samuel went on to get degrees from SUNY Buffalo State and the Fashion Institute of Technology (FIT) — exploring everything from textile design to marketing and communications. She also worked and interned, spending time in retail, and working in PR for Fern Mallis during fashion week at the tents. There were also stints at DVF and a beauty PR company. "I went into editorial starting at W Magazine as an intern," she explains. "And at Teen Vogue, I would see stylists come in and talk about the shoots and the themes they were going for. [They would] pull looks together and see how the execution was. I always wanted to tweak things like, 'oh I wish they had done this look,' or 'why didn't they use this look?' That when I was like, I need to be a stylist, I need to be doing this on my own."

Her first opportunity to style a celebrity solo was Rosie Huntington Whitely under the direction of her then boss, celebrity stylist Cher Coulter. "Just going to her room, pulling for her, having that experience of [working with] a cool girl and seeing what the press [coverage] was afterward was like, 'OK, so now I know what I want to do exactly.' Cher Coulter was that person who really drove it in me because she gave me the opportunity to come to LA and work with Nicole Richie, which heightened my experience in the celebrity world."

With no red carpets this year and most production still on hold, Samuel is navigating a new normal — one she finds refreshing. "Work right now is sporadic," she explains, adding that in-person styling jobs have become Zoom calls and digital fittings. "My day has been waking up, checking and answering emails, working on my pulls and market for the jobs that I have going on ... which have mainly been music videos... and shopping and pulling in a private way."

She explains that she is visiting showrooms to pull clothing for clients, but it's generally appointment-only and much more pared-back than normal. But, for Samuel, this highly organized, clean, and scheduled change is something she enjoys. "I'm very Naomi Campbell about everything," she says alluding to the model's famously meticulous attention to cleanliness, a fact that had the internet abuzz when she shared her detailed pre-flight cleaning routine on her YouTube channel last year. "All of my friends know that. So I enjoy this, I'm like 'keep everything secluded, keep it clean.' ... the whole industry needed a reset and this was a forced reset."

Samuel explains that the opportunity to pause and finally question what the industry has come to consider normal has allowed her to re-set her boundaries. "We've broken down what the norms are and simplified them for a work-life balance," she explains. "Now our employers can look at what they've been doing internally and recognize what needs to be changed, and there's compassion now that people have for those boundaries that are created in the workplace." She cites a recent Sunday text she received from a client — one she would have rushed to respond to in the past. "Now it's like no ... nothing is happening, everything is closed, text me on Monday."

It's about what have I done to contribute, have I been aware of the injustices, and now that i am aware what am i doing to change?

But beyond changes in her work routine, Samuel considers this quiet season one that has given the industry time to reexamine other behaviors that made for a hostile environment for Black women and men. "If the industry can be more mindful and compassionate to the diversity that exists I think we can create some effective change in the future," she explains, adding that that reflection might include someone acknowledging opportunities, "'where I didn't think about maybe bringing a Black person into the room. Now that I'm open and aware with this knowledge, what am I doing with it?'"

She adds that, like many Black women, she operates with a double consciousness — a need to code switch — that doesn't exist for those the system inherently favors. It's an issue finally getting proper recognition as Black employees have used social media to call out tokenism and unfair treatment. "We're talking about the oppression that exists and the stereotypes around the world that perpetuate the injustice [of how] we get treated as Black people," she says. "It's about [asking yourself] 'What have I done to contribute?', 'Have I been aware of the injustices?', and 'Now that I am aware what am I doing to change?'"

Samuel credits the rise of social media with helping to spread awareness and create accountability. "With the platform I'm utilizing my voice a bit more loudly," she says. "We won't be able to change anything if there's no accountability. That's where the industry has shifted, and I think if we continue to call people out on the sh*t they do that's inappropriate or not aligned with a standard that is complete in the world, that will continue to allow people to change and create change."