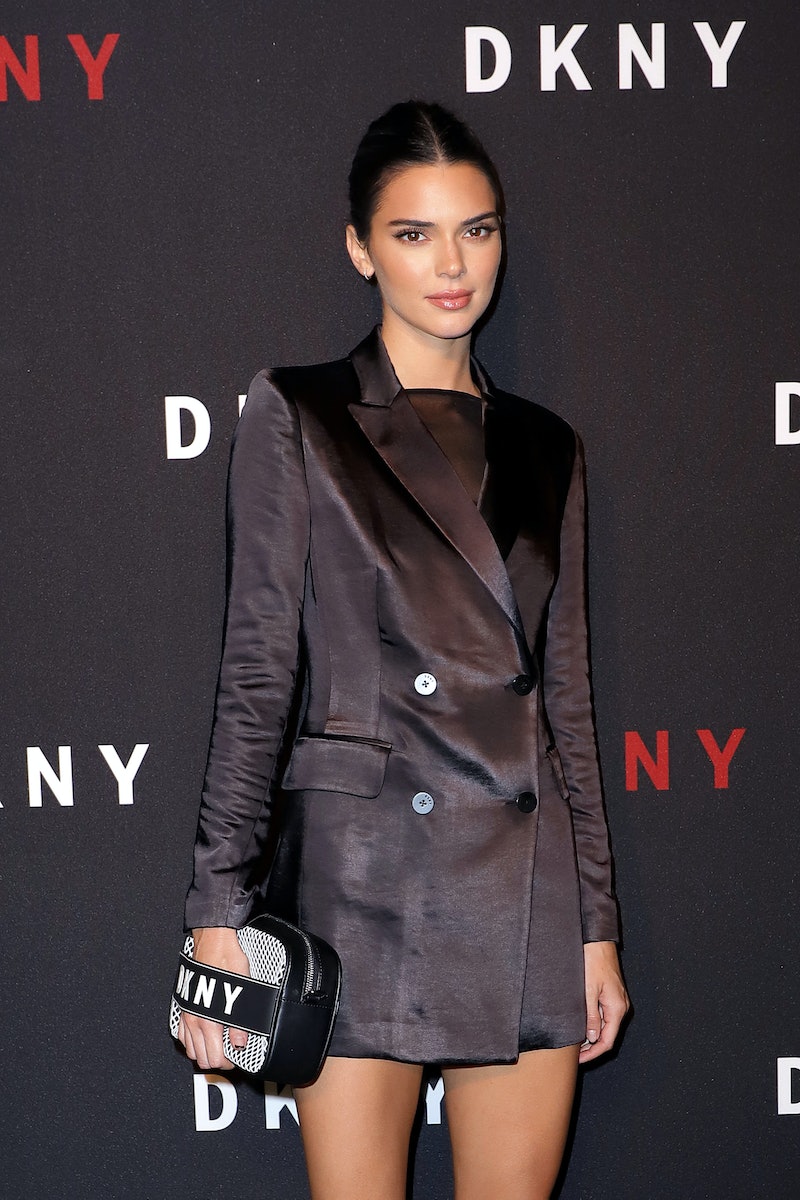 Certain wardrobe staples and accessories are just bound for cult-status — there's something so utterly captivating about them, whether a unique design, a versatile shape, or an inherently distinctive appeal, that tugs on everyone's sartorial heart strings. Take, for example, Staud's Moon bag — a quirky, crescent-shaped tote that has popped up on your Instagram feed and the street-style scene practically nonstop since it was introduced back in July. Bulgarian-based By Far's accessories (aka, the bags and shoes) are quite sought after, too. But there's perhaps no label as prevalent in the accessory closets of Hollywood's best dressed as Stuart Weitzman. The shoe brand's newest Merinda heels? They're already backed by the entire Kardashian-Jenner clan — and they're destined to be the next It red carpet shoe of awards season.

Take a quick peek at the shoes that grace just about every glamorous red-carpet event, and you'll come to see that Stuart Weitzman's iconic Nudist sandal — which boast a barely-there silhouette, a super-sleek, sky-high heel, and slim straps — are the most popular of all, year after year. Their red-carpet reign seemed to kick off sometime in 2013, when Diane Kruger stepped out wearing them — and the rest is history.

But, there is a reason these particular heels have become, well, iconic. "It happened because there was a need for it," designer Stuart Weitzman shared with InStyle back in 2017. "Too many celebrities would change their dress at the last minute and those wonderful shoes we made won't go with the new outfit. We needed to have a shoe simple enough that it could go with literally everything. The Nudist is the little black dress of shoes."

Now, six years (and a celeb fan base that's as expansive as ever) later, and the Nudist shoe just got a major revamp of sorts. Introducing, the Merinda heel, the Nudist sandal's slightly strappier sister that has already been worn by Kendall and Kylie Jenner, Kourtney Kardashian, Sofia Richie, and Olivia Culpo, to name a few.

The Merinda sandal is different from the Nudist in that it has an open-back counter, a slightly curved heel, and a wraparound ankle strap. The similarities between the two? A barely-there design that's all about versatility and a celeb backing that's growing by the minute.

Kendall Jenner wore her black Merindas with a zebra-print Versace gown for a Sept. appearance on The Tonight Show Starring Jimmy Fallon, while Kylie Jenner slipped into the metallic iteration for Hailey Baldwin and Justin Bieber's South Carolina wedding.

The shoe is currently available in four ever-versatile colorways, including a crisp white, a classic nude, a sleek black, and a shiny silver, and will cost you a cool $395. Shop the brand's next It-shoe, below.