By Danielle Naer
6.9.2020
COURTESY OF #SHARETHEMICNOW 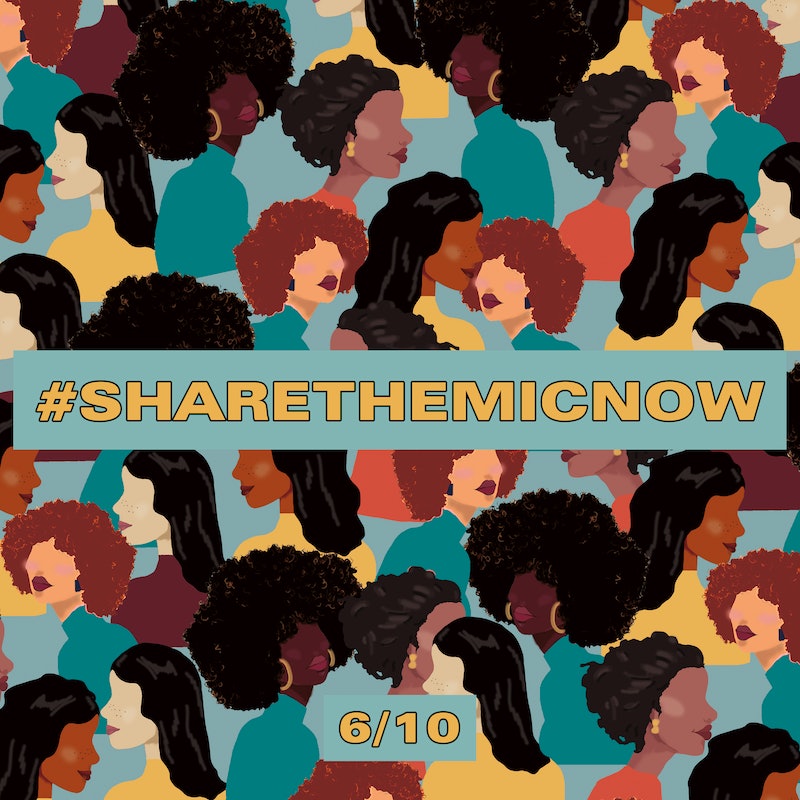 In recent weeks, social media has become a gathering place for the masses to have a dialogue and share information about the racial injustices currently on view. While advocating alongside BIPOC is key to joining a fight that has, for too long, been fought alone, passing the mic to those who have lived this reality should be paramount. That's why the newest initiative for inclusivity, #SHARETHEMICNOW, is having Black women take over some of Instagram's most-followed accounts — with Kardashians and several other A-listers joining the project.

On June 10, influential women from the Black community will spend a day reaching the audiences — some of which include millions of followers — of other non-Black counterparts. Lindsay Peoples Wagner, Editor-in-Chief of Teen Vogue, will be taking over Diane Von Furstenberg's page; Bozoma Saint John, who formerly helmed Uber as the Chief Business Officer, will be posting through Kourtney Kardashian's feed, and Olympic fencer Ibtihaj Muhammad is logging onto Olympic soccer gold medalist Alex Morgan's account. This just scratches the surface, though — in all 45 sets of women will pair up to amplify Black voices.

The initiative is the collective brainchild of Bozoma Saint John, the Chief Marketing Officer of Endeavor, Stacey Bendet, the Chief Executive Officer and Creative Director of Alice + Olivia, Glennon Doyle, and Luvvie Ajayi Jones (both #1 New York Times bestselling authors). Early on, Bendet felt called to hand over her own Instagram account as a means of magnifying Black women's voices. From there, she conferred with Saint John to launch it, who remarked that other women were actually reaching out to her with the same idea. Looping Jones and Doyle into the project, #SHARETHEMICNOW was born — and it's been gaining momentum and support since.

"When the world listens to women, it listens to white women," reads Mandy Moore's post. She details the initiative's goal to ensure Black women are truly heard, thus catalyzing the amazing work they're doing to create meaningful change. "I can’t wait to introduce you to my new friend [Jovian Zayne] @jovianzayne. She and the work she does in the world is pure magic. Stay tuned!!"

Be sure to keep eyes on Instagram tomorrow to learn from the names and faces taking over.