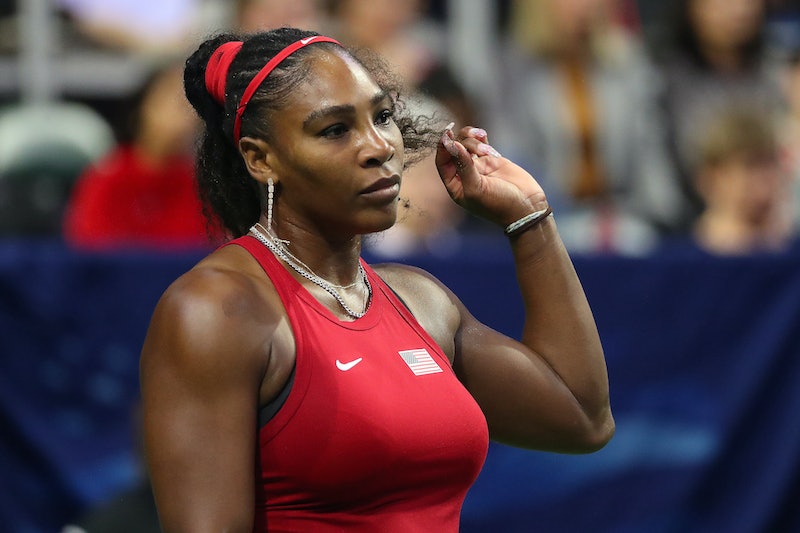 Between the dizzying rallies and ricocheting tennis balls, you may catch a glimpse of sparkle, a splash of color, or corner of an intricate design on the nails of one of the world's greatest tennis players of all time. Most recently, you probably spotted Serena Williams' red nails at the US Open, another instance where her lacquered fingers could be deemed equally worthy of awards. It's one thing to excel at tennis, but it's a whole other story to ace your manicures in tandem.

Despite the pandemic, fans have been able to watch the two-week affair, as Williams chases her 24th Grand Slam title. She's been on top of her game in both the actual sport and her looks, with day six being one of the best. She decided to pair a hot red manicure with a bold red tennis outfit and a matching scrunchie and sweatbands, proving that even a tennis championship is a fitting place for a vivid manicure.

Though it's gorgeous, this fun look isn't anything new for the celebrity. As it happens, Williams is a bit of a secret nail star, and throughout the years has somehow found the time to make sure they're perfectly done for nearly all of her competitions.

She's not afraid to go big, and some of her previous designs include long extensions and bejeweled party nails. During 2020's Australian Open, she donned a manicure featuring a koala on her ring finger as a tribute to the animals that were lost in the country's bushfires, and at last year's Wimbledon, she chose a white and gold marble finish.

While she's known for these playful choices, the color isn't a new shade either. She happened to rock a bright apple red manicure to day three of the Rio 2016 Olympic Games, and long, red round-tipped red nails — a few with patterns painted on — to day six of the 2011 US Open.

If you're having a tough time finding who can be credited with dreaming up Williams' nails, it very well could be because she does most of them herself — according to Essence, Williams enrolled in nail technician training several years back. Where she finds the time to be this talented? The world may never know.

Get a set of nails as bold and brilliant as Williams' with these color options, below.