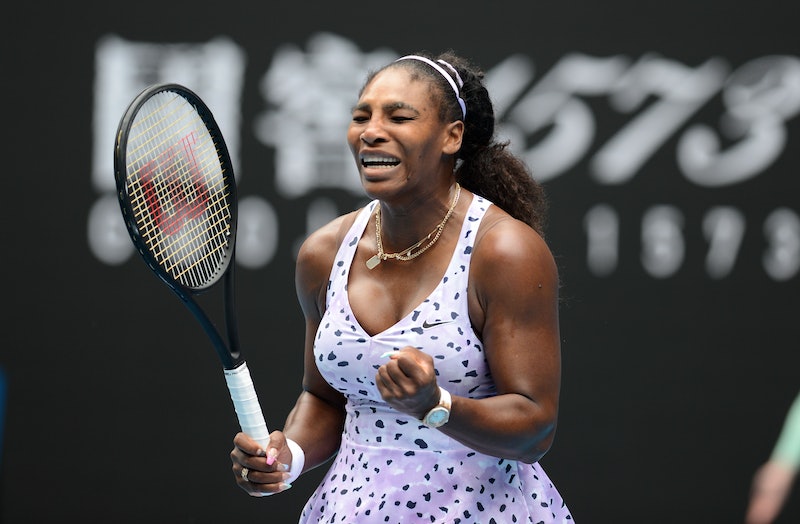 In case you didn't know, a nail trend you might not have expected to come back around has been enthusiastically readopted by the celeb crowd. The French manicure is back in a big way, if the famous and influential individuals giving the look a try at award show red carpets and A-list events are any indiction. But the modern way to wear the throwback manicure is lightyears beyond the traditional white-tipped style — just look at Serena Williams' nails at the Australian Open for proof.

On Jan. 24 in Melbourne, tennis superstar Serena Williams took to the court at the Australian Open for a third-round match against China's Qiang Wang. Unfortunately for Williams, the match ended in a loss (putting off her achievement of a 24th grand slam title for a little while longer). But there's one thing that was seriously winning about Williams' appearance: her game-changing take on the currently-trending French manicure.

In each of the countless pictures captured during the match, it's impossible to ignore the American sports icon's long, whimsically painted nails. Firstly, it's just impressive that Williams can play like the pro she is with stiletto square nails of that caliber. But more notably, the star offered up no shortage of inspiration for your next nail appointment, because her look combined not just one but several trends to try.

Each nail was polished in a French manicure style with different pastel shades, from bubblegum pink and baby blue to mint green and light lavender. The colored tips popped thanks to negative space on the rest of her nails — and intricately-applied blingy crystals along the bottom edge of each tip. Williams' look is technically a French manicure by definition, but it's a whole lot more impactful than the standard tipped style.

And, if you can believe it, that's not even all. Looks like Williams also had her manicurist apply some very cute (not to mention socially significant) nail art in the form of what appears to be a koala on one finger of each hand. The sweet art is just part of her efforts to show support amidst the severe bushfires that have affected Australia; Williams also donated her winnings from the ASB Classic tournament in Auckland to bushfire relief efforts, and encouraged her fans to get involved in a Jan. 9 post on her Instagram.

Want to follow Williams' lead with a playful French manicure? Shop essentials for recreating the look, below.

Don't have time for a sitting with your fave manicurist? Snag a sparkle-infused press-on French manicure set like this one. You can paint over the white tips with some pastel colors to get Williams' look.

Blingy crystals are an integral part of Williams' look, so snag some like these Swarovski crystals to mimic the tennis star's style. Apply them along the line of your French manicure for wow factor.

You'll need a selection of sweet pastels to recreate William's fun French manicure. This spring 2020 selection from Zoya should do the trick (or simply dig through your own collection to create a playful palette for yourself).