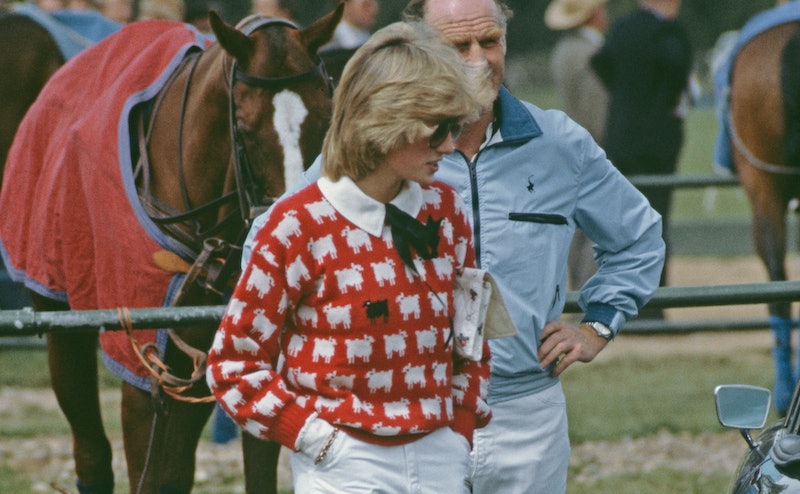 There are so many key moments and elements that defined Princess Diana’s style: the exaggerated collars, oversized sweatshirts, bike shorts, that iconic off-the-shoulder little black dress. Over the years, the late royal’s signature aesthetic has continued to inspire fashion trends. The most recent brand to pay homage to the Princess of Wales is Rowing Blazers, whose new collection includes two sweaters that pull from her iconic fashion file.

Now, you may have already noticed that this season's biggest trends have given the prep school looks of the ‘80s and ‘90s new life, with the rise of pleated tennis skirts, sweater vests, and tweed suiting. However, another major look to emerge from the era is vibrant, graphic sweaters like the ones Diana opted for on her off-duty days.

In Rowing Blazers’ latest installment, you’ll find two such knits that are replicas of ones the royal wore, each made in collaboration with their original designers. “My first step was not to design anything but to track down two British designers who made two very iconic sweaters for Diana,” says Jack Carlson, Rowing Blazers’ founder, to TZR in an email. “That’s what’s special to me, working with the original designers to do something real, something meaningful.”

To recreate Diana's red sheep sweater (pictured above) the New York-based brand teamed up with the women behind Warm & Wonderful — Joanna Osborne and Sally Muir — who hadn’t produced the top since 1994. As for the “I’m A Luxury” sweater that Diana also famously wore in the '90s for a photo op with her sons William and Harry, Rowing Blazers looked to Gyles & George for its reimagining. Carlson used the two sweaters as the foundation of the brand’s collection, designing additional styles around them, using the late Princess as the archetype for the preppy spirit that lives in each item.

In addition to Diana's sweaters, the capsule features cropped versions of Rowing Blazers’ signature rugby shirts, along with sleek patchwork suiting that's perfect for crisp fall weather (and riff off of another huge seasonal trend). Scroll down to shop the brand’s royal-inspired collection below.