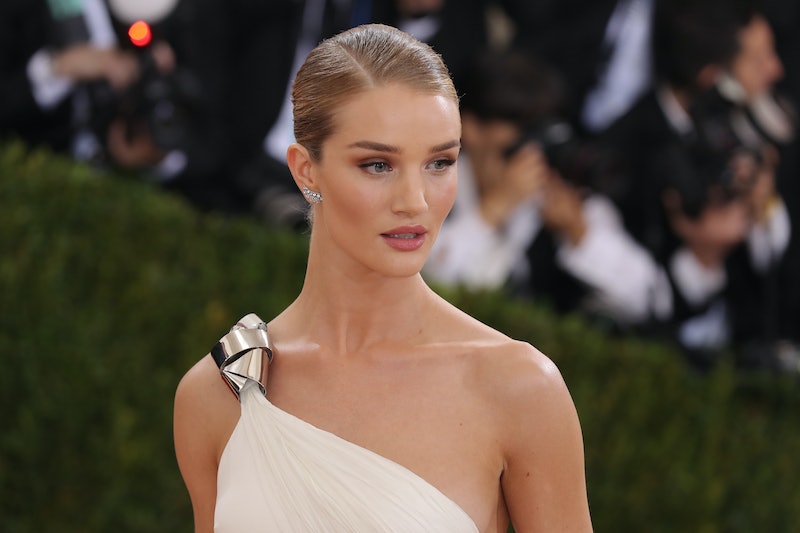 Mixing trends can prove to be quite difficult, especially when you think about how bold some of 2019's most popular fashion crazes are. From bright neon to menswear suiting and workwear-inspired classics, this season's most covetable essentials are already super statement-making on their own. And although you might be intimidated to pair two into one outfit, Rosie Huntington-Whiteley's leather set and snakeskin heels outfit proves trend mixing isn't all that difficult to master.

Half of Hollywood has officially relocated to the French Riviera to attend the glamorous 10-day affair that is the Cannes Film Festival, while the other half is currently in Sydney for Australia Fashion Week. Huntington-Whiteley is among those to jet-set down under this week, and though she isn't strutting any runways this season, the model's definitely dishing out major looks off the catwalk.

On May 15, Huntington-Whiteley was photographed mid coffee run, and as you'd expect, the seasoned street styler's outfit was as au courant as ever. She wore a bold leather set, consisting of straight-leg trousers and a workwear-inspired button-up, which she teamed with another one of 2019's biggest trends: snakeskin shoes.

The model's printed slingback pumps hail from footwear-line-of-the-moment, Amina Muaddi, and feature a cool sculptural heel. They're edgy yet feminine at the same time and are the perfect juxtaposition to Huntington-Whiteley's menswear-leaning two-piece.

She accessorized her look with easy, everyday pieces, including cat eye sunglasses by Celine, diamond drop earrings, and a sleek white clutch. As for her hair and makeup? Simple, sleek, and understated, as per usual.

The key to mastering trend mixing? Keep one of the elements a bit more understated. In Huntington-Whiteley's case, she subtly worked snakeskin into her look with her footwear, as not to overpower or clash with her set. Mandy Moore followed this same approach back in April, when she worked two bold fashion crazes into one look.

Ready to try it out for yourself? Ahead, The Zoe Report rounded up some of the best workwear-and-snakeskin pairings to take out for a spin this season. Shop the cool combination, below.

This ultra-buttery leather shirt draws inspiration from classic workwear, much like Huntington-Whiteley's pick. Consider pairing it with the coordinating trousers and neutral-hued snakeskin pumps.

These aren't your average trousers — and that's what makes them so investment-worthy. The skirt overlay adds eye-catching detail that won't go unnoticed.

For a more understated way to work snakeskin into your look, reach for these strappy sandals that hit on two huge trends: barely-there silhouettes and animal prints.

Jumpsuits offer up an easy way to rock the workwear trend. Juxtapose this Current/Elliott linen one-piece with sleek snakeskin pumps or dress it down with chunky white kicks.

For a super on-trend shoe, look no further than these Aquazzura sandals, which perfectly combine PVC with snakeskin. Picture them with a jumpsuit or a sleek leather set à la Huntington-Whiteley.

This leather shirt already combines two trends in one: snakeskin and workwear. Wear it with the coordinating skirt, grounding the look with neon-green pumps for a pop of color.

Though this skirt comes with a matching shirt, you can easily wear it on its own, too. Try pairing it with a crisp white tee and bright-hued pumps.

You're guaranteed to stop traffic when you step out in these Zara shoes. Team them with a leather set for a maximalist-approved outfit that's equal parts edgy and fun.