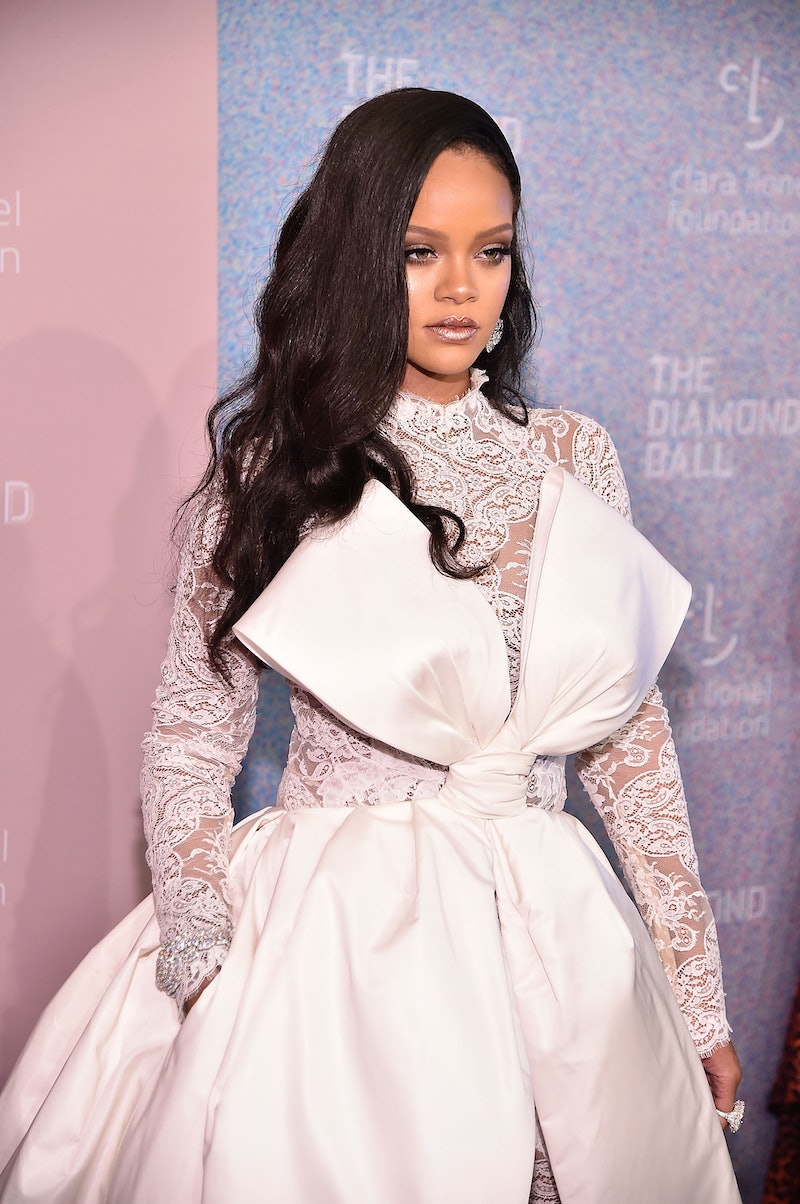 The Sept. 10 New York Fashion Week rounds ended with a serious bang, thanks to Rihanna's epic Savage x Fenty runway show — which is, perhaps unsurprisingly, still being kept under tight wraps. Attendees were required to lock up their phones, while professional images from the presentation remain quite scarce, as well. Don't get too sad, though, because the event will stream in its entirety on Amazon Prime on Sept. 20. And if you're looking for something to hold you over until you can actually watch the full Savage x Fenty show, Rihanna's red-carpet look from the Tues. evening gathering is sure to do the trick.

As you'd expect from a show as epic of Rihanna's, the attendee list was, well, pretty epic. Bella Hadid didn't walk down the runway this time around, but she did make quite a splash on the red carpet when she stepped out wearing a $30 bra as a top, courtesy of the designer's newest collection, with an oversized emerald set. Ashley Graham showed off her growing baby bump in a mesh LBD, while Gigi Hadid rocked jeans in the coolest way possible (hint: with a black corset).

Ultimately though, the lady of the hour was Rihanna — and it was impossible for anyone to outshine her red-carpet look (quite literally, actually). The designer arrived in a shimmering midi dress from Alexandre Vauthier's Fall 2019 Couture collection. The one-shouldered number featured an asymmetric hemline and was doused in plentiful Swarovski crystals that sparkled with every flashing camera light.

The glitz didn't stop with the dress, though. Rihanna took the high-octane, glittery look to an entirely new level by throwing in bejeweled Andy Wolf sunglasses and a pair of strappy Manolo Blahniks with crystal-embellished star detailing. Of course, her giant diamond hoops by Noudar, her rings, and her watch didn't go unnoticed either.

Last but certainly not least, bold pops of red on her nails and lips added cool contrast to her monochrome mint ensemble. Amazing, as per usual, Rihanna.

So, channel the singer's latest getup for your next outing by shopping The Zoe Report's favorite crystal-embellished pieces on the market, below. Warning: You'll be in a seriously festive mood after seeing them.

Your cold-weather fashion game just got a major upgrade with this crystal-embellished beret.

It's never too soon to start planning your New Year's Eve look. This dress is perfect for ringing in the new year, but you can wear it long after, too.

Found: Your next cocktail party dress. Wear this ASOS number with strappy black heels and a bright red lip.

Headbands are still going strong for fall 2019 — and this one is going to take any evening look to an entirely new level of glam.