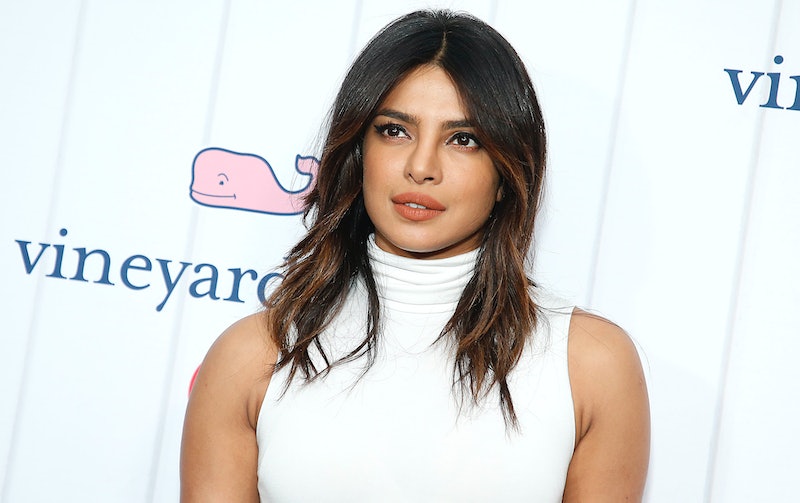 Priyanka Chopra can't stop and simply won't stop with the fashion statements lately. You'd think the actor would take a break after putting on her own runway show at the Met Gala, then again in Cannes, but instead, the looks just keep on coming. The black dress Priyanka Chopra just wore is turning fishnet into a must-try this season.

The Quantico actor wouldn't have missed the premiere of Nick Jonas' new Amazon Prime documentary, Chasing Happiness, for the world. Although her husband and his two brothers were supposed to be the men of the hour, Chopra's dress sort of stole the show (sorry, Jonas).

Her satiny black column wrap dress is by Israeli bridal designer Galia Lahav and if you think you've heard that name before, it's because Beyoncé wore one of her creations during her and Jay-Z's vow renewal ceremony earlier this year.

The gown — called the Alanis — features crinkled silk crepe at the hip, a thigh-high leg slit, sharp shoulder padding, and long sleeves which Chopra had altered to omit the dress' original embellished cuffs. Its standout element was no doubt the sparkly crystal net detailing that decorated Chopra's high neckline and peaked through the leg slit.

The actor wore a similar silhouette with that lace-adorned cut-out maxi she sported during the Cannes Film Festival. The takeaway from Chopra's latest look, though, is that fishnet is definitely on its way in.

Everyone from Dior to Dries Van Noten featured the hosiery-inspired netting in their Spring 2019 runway shows. Since then, fashion girls have been showing off their fishnet socks and net overlay on Instagram and it's about time you start following their lead, too.

These summer-ready pieces are the perfect way to introduce the daring trend into your warm-weather wardrobe subtly.

Fishnet has a reputation for being edgy but this daisy-adorned top gives it a feminine flair. It's the perfect statement piece for spring.

Nothing beckons warm-weather picnics in the park like this flowery crochet midi with fishnet and scalloped trim on the skirt.

Give in to the season's emerging neon trend with this highlighter-green top. Tuck it into your favorite pair of jeans for a cool weekend look.

Who said fishnet isn't work-appropriate? This cotton-and-tulle pencil skirt is the perfect addition to your office outfits.

Opt for this sunny yellow summer dress instead, with fringe trim and Chopra-inspired fishnet paneling.