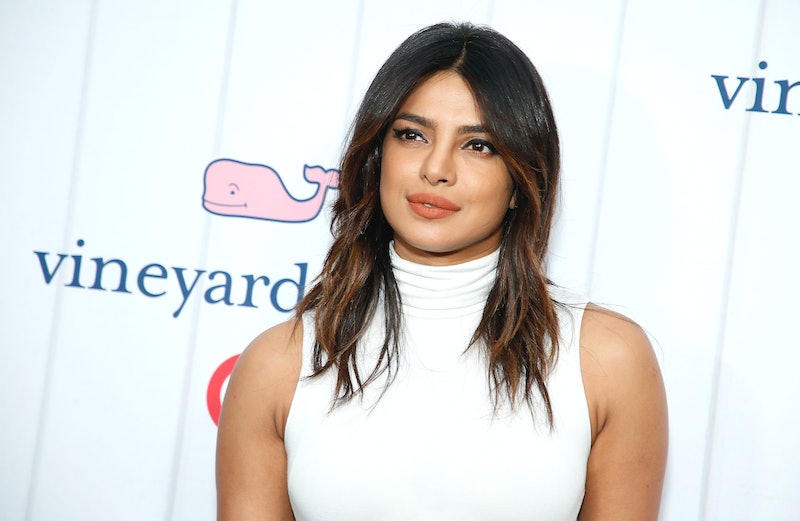 Priyanka Chopra has arrived in the French Riviera for her Cannes Film Festival debut. Every year, the celebrity-studded extravaganza that takes place on the Mediterranean coast brings out the most over-the-top red carpet looks and, well, that's pretty much this actor's thing. On Fri., it was the genius addition of a belt that made Priyanka Chopra's blue dress.

The Quantico actor hit the ground running with a glittery, slit-laden black-and-rose gold gown — a custom Roberto Cavalli creation — and Chopard jewels during Thurs. evening's premiere of Rocketman. And believe it or not, her Cannes wardrobe has only got better from there.

Fri. morning, she turned heads yet again, this time wearing a silky, kimono-style maxi while out with husband Nick Jonas. As if the pale-blue gown's chicly draped silhouette just wasn't enough, Chopra added her own little twist. Her hat and belt accessories completely transformed the dress.

The actor sported a white, wide-brimmed hat on her head and a wide leather corset belt by Alaïa around her waist. The belt — featuring a studded lace design and slender center band — added cinching to the slouchy gown, ultimately giving it shape. Funny how a detail so seemingly small can change an outfit entirely.

Silky, nightgown-esque dresses are in and Chopra's latest is one of them. Sleepwear is the next thing in weekend attire, apparently — the trend started with satiny separates and has since moved into the dress zone.

Wearing a glorified nighty to brunch, though, is bold. Chopra's belt — a genius idea that no doubt came from her stylist, Mimi Cuttrell — is the perfect way to make the pajama trend daytime-ready.

Add one of these statement belts (including the exact one Chopra has) to your slouchy dresses for a super-polished look.

With the intricate design and tiny stud detailing, Chopra's belt is about as chic as it gets. This eye-catching accessory is sure to take any casual dress to the next level.

Pair this extra-wide white belt over your pants and dresses alike. Its cross silhouette and gold hardware add a touch of luxury to the classic accessory.

Tie this versatile metallic number around your waist to glam that silky sleeper right up, Chopra-style.

This wear-with-anything leather belt is the key to elevating your favorite all-black looks.

For a bolder look, this stunning silver, snakeskin piece is certainly worth the investment.