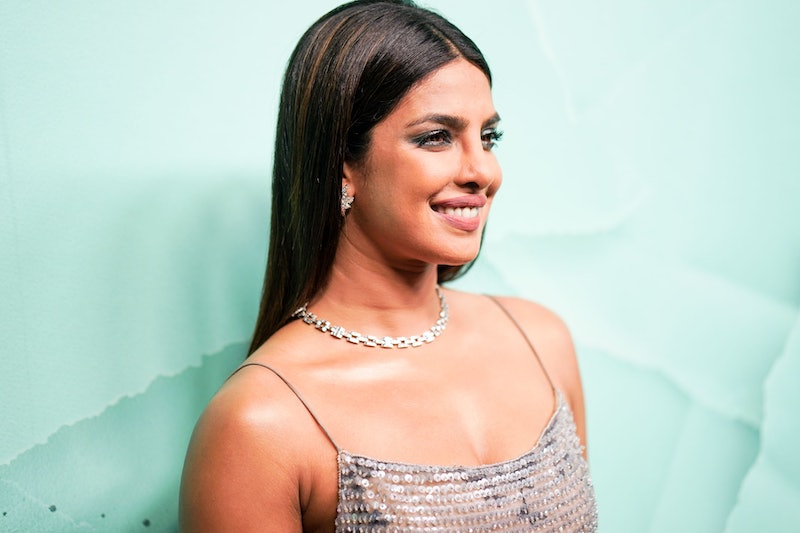 Priyanka Chopra and Nick Jonas have kept you on the edge of your seat for the past week with their clandestine wedding festivities, and now, the bride has finally posted photos of her bridal gowns (yes, plural). The couple had back-to-back Christian and Hindu ceremonies on Sat. and Sun., which gave the fashion-forward actor a chance to wear a different look each day. Needless to say, Priyanka Chopra's two wedding dresses were just as unforgettable as everyone expected.

Hollywood's favorite couple chose to tie the knot in India, where Chopra was raised, which left everyone wondering whether she would wear a Western white wedding gown or a traditional Hindu dress. She, of course, opted for both.

Days before the final ceremony, Vogue confirmed that the 36-year-old would be walking down the aisle in custom Ralph Lauren, a brand that's been woven into her and Jonas' romance since the beginning. On Tue., the stunning gown was unveiled on Chopra's Instagram.

The bride wore a long-sleeved, high-neck number over a strapless column dress that was embellished with 2,380,000 mother of pearl sequins, according to a Ralph Lauren press release. The collared gown closed in the front with 135 satin-covered buttons and was hand-embroidered with floral motifs, lace-effect tulle appliqué, and Swarovski crystals. It reportedly took 1,826 hours to complete.

And not only was it stunning to look at, but Chopra's bespoke gown was so meaningful, too. She had eight sentimental messages — including her fiancé and parents' names and the words "hope," "love," and "compassion" — stitched into the embroidery, along with a piece of her mother-in-law's lace wedding dress. Jonas, who wore a black tuxedo by the brand's Purple Label, had a piece of lace from Chopra's gown sewn into the lapel with the Urdu words "My Jaan," meaning "My Life."

Jonas' father officiated the Christian ceremony, which was held at the elaborate sandstone-and-marble Umaid Bhawan Palace in Jodhpur. Everyone in the wedding party, including 12 bridesmaids, 12 groomsmen, four flower girls, and others, wore Ralph Lauren. The luxury brand has played a role in the newlyweds' relationship all along, having even been the reason for their first public appearance together at the Met Gala in 2017.

To top off her Western look, the Quantico actor accessorized with an extraordinary 75-foot tulle veil. The Dec. 17 issue of People features a photo of the couple on their wedding day with Chopra in neutral makeup and a magenta lip. She wore her hair pulled back with curled pieces elegantly framing her face.

The former Miss World's bridal look was much different, however, for the Hindu ceremony on Sun. This time, she wore a traditional Indian outfit consisting of a long skirt and midriff-baring choli by designer Sabyasachi. The stunning red lehenga featured organza flowers and silk French knots, People reported, which took 110 embroiderers 3,720 hours to hand-sew. She accessorized the dress with a matching scarlet dupatta, a bindi headpiece, and a nath (a nose ring essential to Indian brides).

Her groom sported a traditional Indian ensemble, too, consisting of a gold suit and turban. Chopra posted two photos of her and Jonas — one from each ceremony — to Instagram, captioning both, "And forever starts now..."