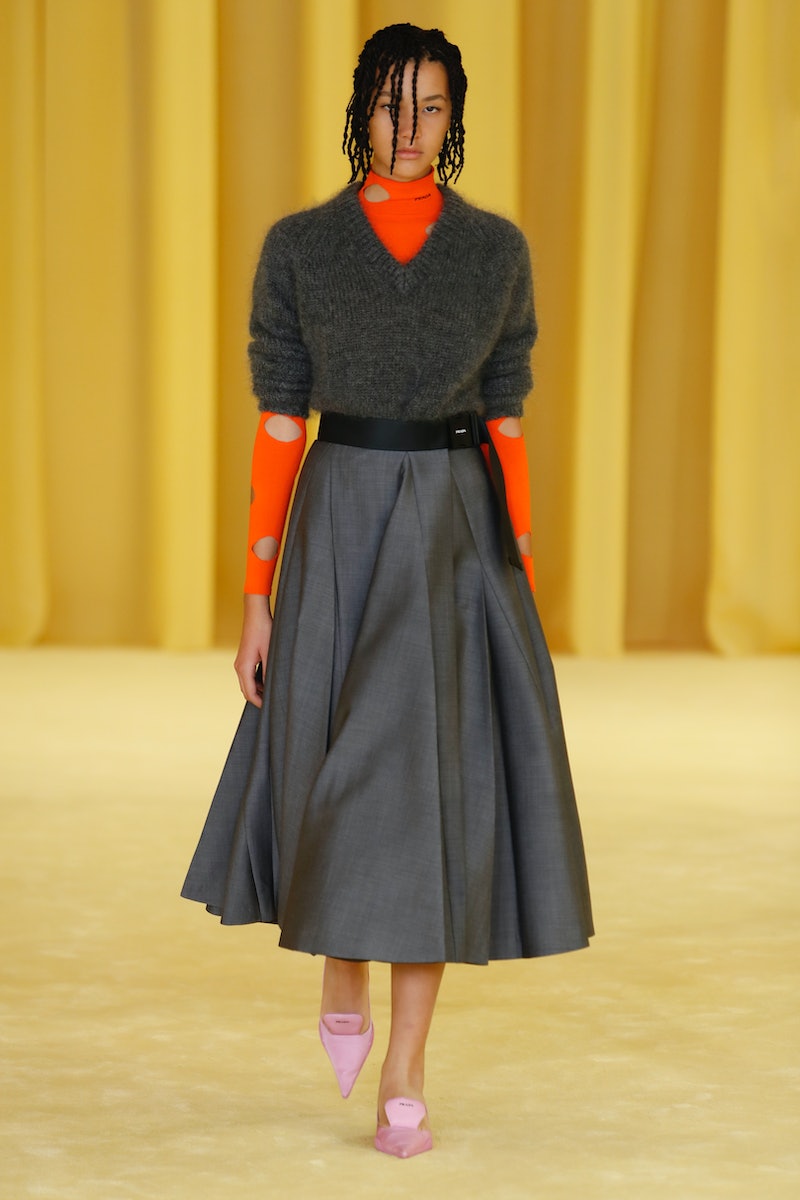 Designing a run-of-the-mill collection is challenging enough in the midst of a total shutdown. But, Prada's Spring/Summer 2021 show couldn't be just any old show — it had to mark the beginning of a new era for the iconic Italian brand. After months of anticipation, Miuccia Prada's first collection co-designed with Raf Simons has arrived, marrying the sensibilities of two of the most prolific designers of the modern era. According to the duo, it's been a harmonious transition, even with mussed timelines and upended plans. "Decision making for me is strengthened when I know Miuccia likes very much what I like very much," Simons said in a q&a after the show. "Even if I'm convinced, my decision is strengthened if she's convinced and the other way around."

For their first collaborative collection, the duo approached the Prada DNA from dual perspectives, touching on core concepts within the brand like uniform dressing and femininity, while also acknowledging the ways in which technology and the Covid-19 crisis have adapted the design and production process. "During the lockdown we realized ... mainly I realized how important technology is and how it's impactful for us and kind of in some ways an extension of ourselves," Prada explained during the q&a. "We have the occasion to really show clothes. We can't see the real girl, the real people, the real fabric, but at least because we are doing a small film, we are hoping you can see and enjoy the clothes better, which is a very important point for the two of us."

Within the collection, there exists references to both designers' aesthetics. There's the graphic edge and playful shapes of Simons, and the swinging skirts and dainty prints of Prada. But, perhaps the most obvious one was not apparent from the clothing itself, but in the way that models wore it down the runway — softly clutching their coats and dresses at the chest, a nod to a gesture used by Ms. Prada herself (it was also one used on her first runway in fall 1987). Read the show notes: "Garments are drawn around the body, held by the hand. It is an innately human gesture that can be transformative, translated into the architecture of pieces, to cut and form language."

Simons explains that viewing himself as a newcomer and outsider helped him to frame his idea of what exactly is Prada-ness, the identity that envelops the brand. "I've always seen it as a kind of community that has a very specific attitude, intellect, aesthetic," he explained. "That is the one thing, you can't really define what it is, but you feel that it is, it exists, it's present, it's clearly there and I think that's a very important thing for me."

While many designers have embraced a certain slinkiness and relaxed aesthetic in response to the current crisis and changes in shopping habits, this collection, while pared back still leans towards polish and tailoring. But, it still acknowledges a need for simplicity. Coordinated separates or coats that are an outfit in their own right both address the modern reality. The idea of uniform was a continued conversation from July's Spring 2021 Men's show, now approached through a fresh lens.

"The thing I talked most about with Miuccia through all these months was uniforms," Simons said. "Not uniforms as how we literally perceive it when we hear the word ... not the army uniform or the police uniform or something ... but effectively true metaphorical ones." Both designers have long honed in on their own personal uniforms (Simons claims that his tradition of wearing black Prada pants long predates his hiring), but here they have honed in on the idea. Not just in matching tops and bottoms, but as a marker of self identification. For a Prada woman there's a duality in uniform — it's about confidence and personal style just as much as it is about really good clothes.