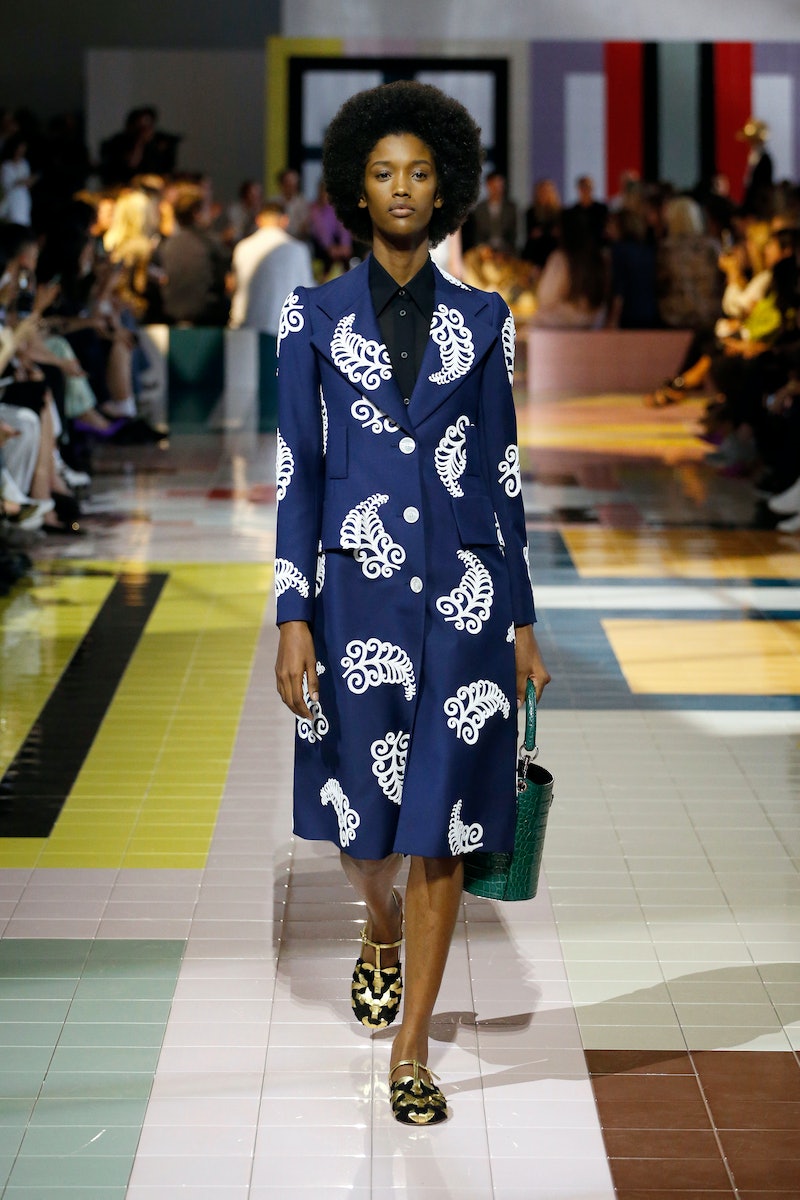 If there's one thing you can say about designer Miuccia Prada, it's that she consistently surprises. Many fashion houses are defined by a specific aesthetic or a single signature piece, but Prada is not one of those houses. Each season, the label draws inspiration from new and unexpected places, but always manages to capture the imagination of the well-heeled audience. For Prada's Spring/Summer 2020 runway show, the designer took a step away from the logo-laden sportswear and utilitarian designs of the last few seasons and instead opted for a simple, sleek, and elegant showing, with nods to fashions of the '70s, '30s, and '40s.

Guests entered the giant show space at the Fondazione to find the floor and their seats lined with bright splashes of ceramic tile — black, white, yellow, pink, and teal all sprinkled in together. The front row is always stacked with celebrities, and this season the mix included Nicole Kidman, Winnie Harlow, and Wes Anderson — a group who may seem incongruous at first, but leave it to the buzz of the runway to bring them all together. Prada is one of those brands that belongs to everybody, in part because of the designer's constant work to re-create exactly what it means to be a Prada woman — she's always smart, and sure of herself, but this season she's also embracing a more thoughtful take on dressing.

For those who have embraced the logo-emblazoned bags, and windbreakers, or the vibrant tie-dye and banana prints of seasons past, this collection feels like a stark juxtaposition to the flashy pieces you're used to. But, this is part of what has made Miuccia Prada such a prolific designer, there are always through-ties in her collection — little bread crumbs that remind you exactly who it came from, but one collection need not be a direct descendant from the last.

If there was one particular item that stood out throughout the collection, it was the designer's reimagined floppy hat, with one side of the brim flipped upwards. The look was quirky, with nods to both the felt hats of the '40s and the recent rise of the bucket style. Models topped off sleek suits, gauzy linen slips, and crisply tailored wool coats in both neutrals and pops of color — many of which were embroidered with delicate beaded fern patterns. The clothes were not overt, they were subdued, making a statement with fit and layering rather than print or logo.

So, too, did the pieces suggest a more streamlined way of dressing, an ability to mix and match those items in ways that fit in with the way many modern women want to dress — in clothes that are just as flexible as they need them to be. The collection included a wide range of shoes — heels, flats, platforms, and notably sleek, snakeskin loafers. But, all of the footwear presented also stayed true to that ready for anything sensibility. Heels don't teeter, boots don't clunk, and sandals aren't so stripped down as to make movement impossible.

As for bags, gone are the hypebeast-lauded fanny packs and neon striped or punky, studded shoulder bags of previous seasons. Instead, the bags presented were a bit more anonymous. Wicker, leather, and croc-embossed buckets, shoulder bags and clutches — minimal save for a single logo pin near the top. They don't shout to the passer-by that you're wearing Prada, they whisper the fact softly. And in doing so, they fit in seamlessly with a wardrobe that's meant to carve out a place in the world for a woman who is confident in her style, and doesn't need a something flashy to serve as a distraction. That is, until the house brings neon back in the seasons to come.