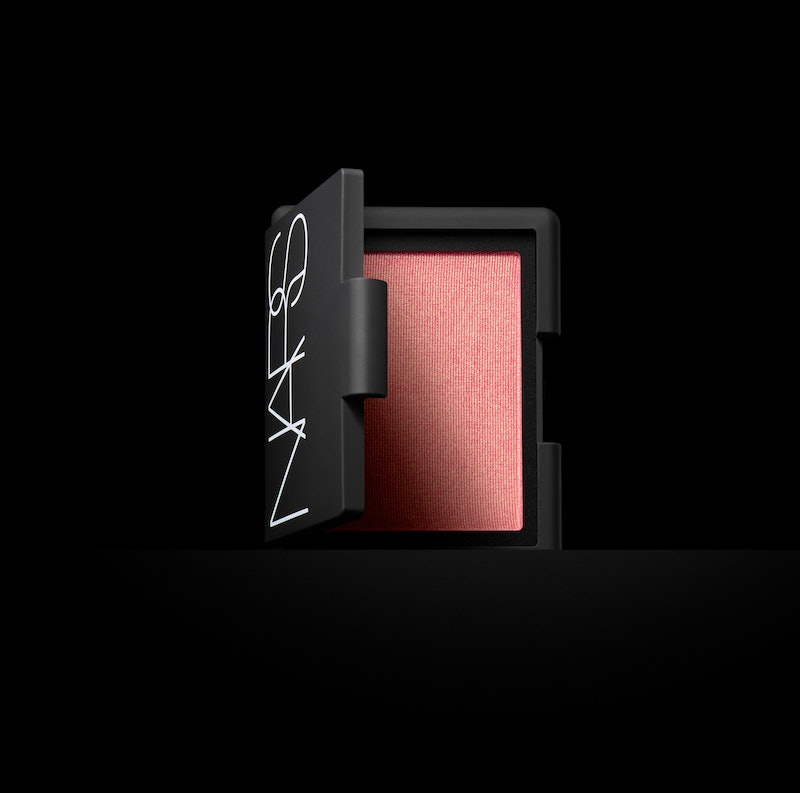 The Climb is our series that highlights a top-selling item from brands both established and buzzworthy. In these monthly features, you'll hear straight from the brands about the fascinating history of how one extra-special piece exceeded expectations and became a forever product. This month's focus is on audacious NARS Orgasm blush. which has been making the greater beauty universe blush since its inception in 1999. Find the story behind the most buzzed-about product below.

The provocative name is enough to make you blush even before you swipe on NARS Orgasm, one of the brand's cult-favorite beauty products, and one dusting is confirmation it’s something to get excited about. There’s a reason — several — why this suits-all shade comfortably maintained its reign as the end-all-be-all blush for more than two decades. It starts with the meticulous crafting of beauty legend, François Nars, who managed to recreate that natural post-intimacy flush with a mix of pinky-peachy hues and soft gold shimmer. Then comes the magician-like skill that made this particular combination universally flattering across the complete spectrum of skin tones. And the rest lies in the attention-grabbing, jaw-dropping, heart-racing, legs shaking — sorry, we got carried away — seductive name that’s made NARS Orgasm blush a number one best-seller.

Let’s talk numbers. To put matters into perspective, one NARS Orgasm blush is sold every minute in the United States according to brand sales data. And for anyone still wondering where that falls on the "favorite" spectrum — the brand reveals that NARS Orgasm blush is the number one selling blush in the U.S., per The NPD Group, Inc./BeautyTrends, U.S. Prestige Makeup Retail Unit Sales, January-October 2019. That’s a lofty feat for any product, especially one that launched before the millennium and continues to attract unprecedented praise. Speaking of praise, nearly 52,000 fans sing their Orgasm praises on the internet, with glowing 4.5+ star online reviews in celebration of this favorite blush.

As for the backstory, NARS Orgasm blush first graced the beauty universe back in 1999, just five years after the brand debuted (in 1994) with a line of twelve lipsticks sold exclusively at Barneys New York. “I never anticipated its success,” founder and creative director François Nars, shares with TZR. “Looking back, I think the combination of the name and the shade made it so popular.” Admittedly, it’s an intriguing pairing that’s hard to ignore — even two decades post-launch. But what makes NARS Orgasm such an all-star, withstanding the test of time and the pressure of zillions of wannabe dupes emerging in its wake? “Orgasm belongs in the Beauty Hall of Fame because it transformed a fairly banal product — blush — into something provocative, surprising and imaginative,” Linda Wells, founder of Flesh Beauty, tells TZR.

“I actually first created the name, then the shade. I wanted something shocking,” François Nars shares. And the shock factor hasn't changed one bit. “Yes, Orgasm is a perfect shade that looks good on almost everyone," Wells adds. "And, yes, it has the ideal amount of gold shimmer, meaning very little. But it could just as easily have been called Dainty or Lovely or Innocent. Francois is too clever for that, though. By naming it Orgasm, he connected blush with something more thrilling and audacious. It's not easy to get excited about blush, but it's easy to get excited about Orgasm.”

And boy did the world get excited. After 16-consecutive Allure Reader’s Choice Award wins from 2002 through 2017, five consecutive Allure Best of Beauty Awards from 2004 through 2008, and Glamour Beauty Awards Most Universally Flattering Blush in 2017, it’s safe to say Orgasm is a fan favorite. Not to mention the impressive list of celebrity wearers including the likes of Meghan Markle, Jennifer Lawrence, Kylie Jenner, Adele, Bar Refaeli, Catherine Zeta-Jones, Kristin Davis… you get the idea.

When it comes to the formula and wear, there’s something about the weightless, natural-looking flush that makes its results completely alluring across every single skin tone. It’s formulated with micronized powder pigments that give it that irresistibly soft texture that makes you smile when you touch it, and makes it exceptionally blendable so you can build up to your desired flush. “It’s Orgasm’s peachiness that makes it so universally flattering,” celebrity makeup artist Ashleigh Ciucci explains to TZR. “Peach shades wake up the face and give the most believable flush. The shimmery texture mimics that just-took-a-roll-in-the-hay afterglow,” she adds. As for her expert application tip: use a large fluffy brush. “While large powder brushes are traditionally used for loose powder, they make blush diffused and easy to blend. After foundation, apply to the apples of the cheeks and even the temples for an extra warming effect,” she shares.

Recognizing the shade's unprecedented popularity, NARS continued to gift the world additional rounds by expanding beyond the classic powder blush and into an extensive Orgasm lineup including cream and liquid blushes, illuminator, loose powder, and the most recent addition, a gorgeous lip tint He even upped the ante in 2008 with a Super Orgasm blush, which includes a heavier dose of gold shimmer for those who like it more... intense. “I’m preferential toward the cream-liquid blush because it melts into the skin and looks like, well, skin,” Ciucci tells TZR. “Before applying your foundation tap the cream-liquid onto the apples of your cheeks and blend with your ring finger. Don’t be shy about the intensity. You’ll blend your foundation on top and it’ll look like the blush is coming from within,” she suggests.

Like the intimate sexual peak it’s named after, Orgasm blush continues to live up to its name as something to get excited about since day one. “Looking back, I think the combination of its audacious name and its universally flattering shade made it so popular. Even grandmothers like Orgasm,” François Nars shares. (We don't recommend asking yours.)