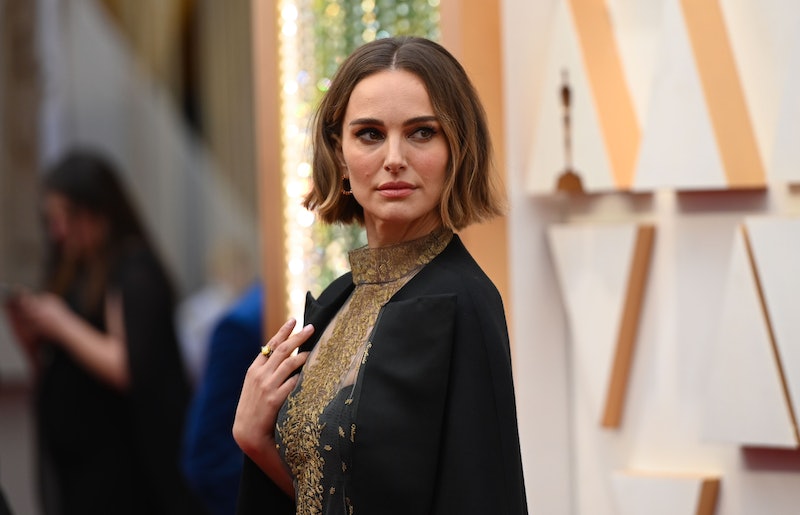 If you tuned in to watch the 92nd Academy Awards on Feb. 9, you were treated to a range of show-stopping looks from some of Hollywood's biggest stars. And while a number of the A-listers' glamorous ensembles created a buzz, arguably, Natalie Portman's 2020 Oscars dress was one of the most memorable of the night. The Oscar-winner's attire for the evening not only dazzled but delivered a powerful message.

Portman stepped out onto the red carpet at the Dolby Theatre in Los Angeles wearing a Dior Haute Couture creation. Her gown — a fluid, silk tulle silhouette with embroidered borders of ears of wheat and wild flowers in antique gold thread — took 600 hours to finish and featured a gold robe-belt at the waist. And though the floor-sweeping frock certainly shined at the ceremony, it was the black cape Portman wore over her shoulders on the carpet that really had onlookers talking.

Portman — who previously noted the lack of female directors nominated in the Best Director category while presenting at the Golden Globes in 2018 — paid tribute to the female directors who did not make the list of nominees for the 2020 Academy Awards by having their names embroidered on the satin cuir lapels of her wool and silk cape.

The names of the women behind some of this year's most critically acclaimed films were featured in golden cursive down the front of the cape. The look recognized the work of: Greta Gerwig (Little Women), Lulu Wang (The Farewell), and Lorene Scafaria (Hustlers) as well as Marielle Heller (A Beautiful Day in the Neighborhood), Melina Matsoukas (Queen & Slim), Alma Har'el (Honey Boy), Mati Diop (Atlantics), and Céline Sciamma (Portrait of a Lady on Fire).

The floor-length cape took 280 hours to create; which means, Portman's attire look took over a whopping 800 hours to complete. But, all that time, effort, and thoughtfulness was clearly worth it — the actress' black and gold ensemble was one that turned heads and started conversation.

The Black Swan star was not the only one to wear Dior Haute Couture for the ceremony either; Charlize Theron, Sigourney Weaver, and Greta Gerwig all stunned in creations from the iconic design house, too.

Portman topped off her statement-making outfit with a set of small, gold hoop earrings and an eye-catching, statement ring. Meanwhile, her natural and fresh makeup look complimented her breezy bob — a top hair moment from the night that further proves this celeb-favorite, hair-length will be continuing to go strong this year.