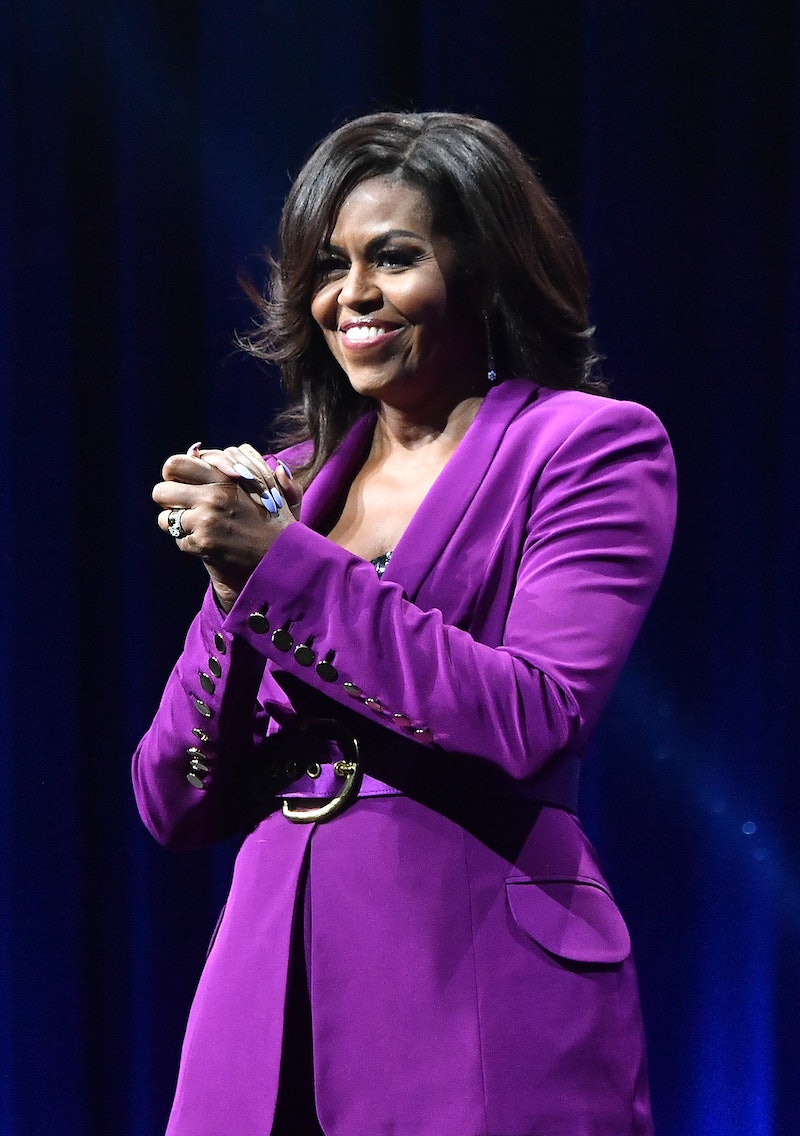 Now that Election Day is less than 100 days away, there's been a major uptick of relevant fashions, all of which rally behind one call-to-action: vote. From tees to necklaces, today's most influential faces have been sporting styles that encourage voter turnout in the upcoming presidential election. The latest to do so was Michelle Obama, whose "VOTE" necklace, which made a glimmering appearance at last night's Democratic National Convention. The best part? The style is still in stock — meaning that you can shop it to get out the word, too.

Obama's sartorial choices have long been admired for their ability to convey a deeper message than a cut or color trend. In the white house she championed young American designers including Jason Wu, Zac Posen, and Thakoon. On Aug. 18, the former first lady spoke to millions nationwide through the virtual conference, dressing up a mocha-hued Nanushka top with refined, delicate jewelry. In addition to slender, oversized hoops, Obama wore BYCHARI's letter necklace, which she had custom-made with one key word: "vote." As she spoke to the significance of national empathy and how its loss could impact future generations, her minimalist jewelry strand was the perfect piece to amplify her message.

The necklace is currently available for $295 on BYCHARI's site, with white, rose, and yellow gold (14K and 18K) options to choose from. "I had created a VOTE necklace for the last election and knew I was going to do it again," shared Chari Cuthbert, Designer & Creative Director of BYCHARI, in an official statement from the brand. "As we started our outreach, I was honored when Michelle Obama's Stylist asked for one and am thrilled she is wearing it!"

While the necklace is still in stock, it's likely to sell out in a flash — but not to worry. There are tons of similar styles, all of which encourage the same civic action. Take, for example, Stella and Bow's collaborative necklace with I Am A Voter, which has been worn by celebrities from Chelsea Handler to Ashley Benson. Or, Babygold (a Khloe Kardashian Favorite) has a diamond letter necklace that's nearly a dupe of Obama's, which you can have customized with the word "VOTE."

Continue ahead to shop the exact look, as well as a few other versions: