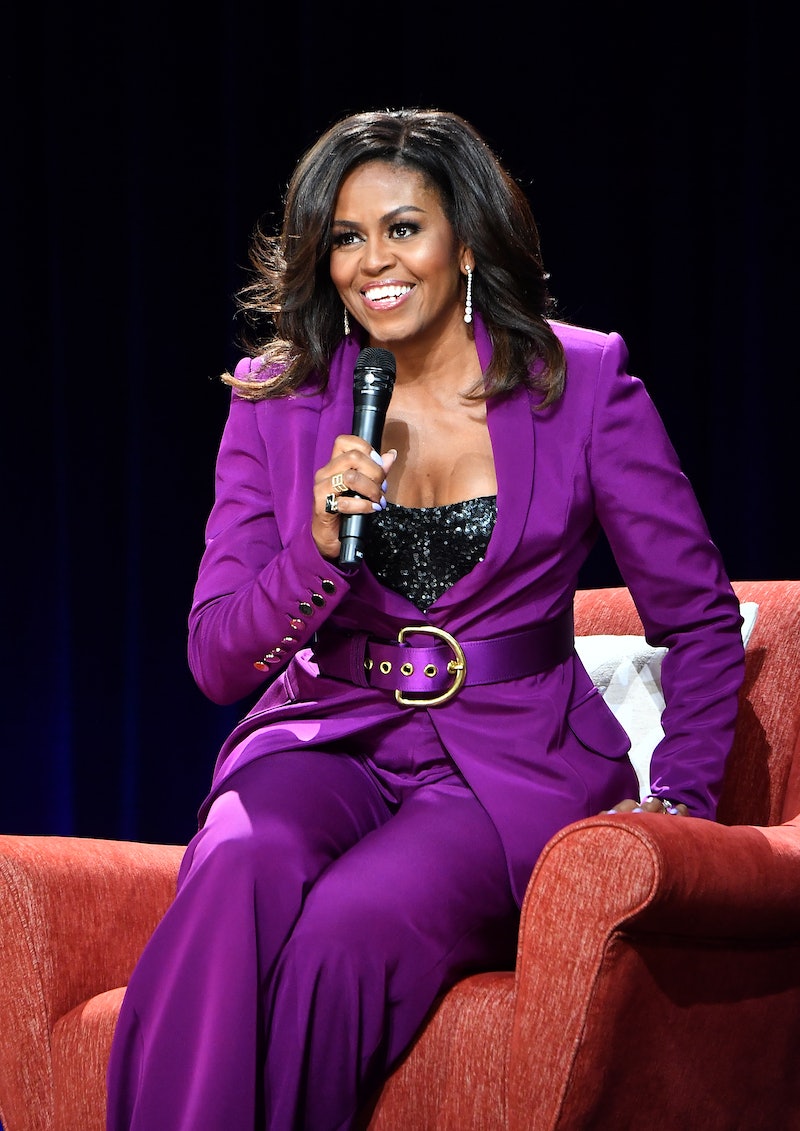 Not one to shy away from an eye-catching color, Michelle Obama's 2019 American Portrait Gala dress may be one of her boldest looks yet. The former FLOTUS was the latest famous face to wear the on-trend canary yellow hue while presenting Lin-Manuel Miranda with the Portrait of a Nation prize at the event. Obama's stunning dress further proves that you can in fact slip into the sunny shade for fall and the holiday season.

For the American Portrait Gala, Michelle Obama wore a custom, vibrant yellow Schiaparelli gown with sparkling crystal detailing. And while this is not the first time the former first lady has worn an eye-catching yellow shade (who can forget this Balenciaga dress and glittery, thigh-high boot moment from her Becoming book tour), it is the first time Obama has worn a piece from the Paris-based design house, Schiaparelli, according to Vogue.

"The inspiration for the shape originally came from the crinoline which is often found underneath couture gowns, but the real starting point for the overall look was the colour," Schiaparelli's Creative Director, Daniel Roseberry, told Vogue about the design. "The acidic tone echoes Elsa Schiaparelli’s signature shocking pink, and we also felt that it matched the strength and energy of Mrs. Obama. It was such an honour to make this special gown for her."

The former FLOTUS and mother of two is not the only powerful woman to sport a lemony-hue of late; Jennifer Lopez wore a ruffled yellow gown to the Toronto Film Festival premiere of Hustlers and Kacey Musgraves turned heads at the CMA Awards in a yellow and gold feathered frock. Meanwhile, the bold shade was also seen coming down the Fall/Winter 2019 runways at shows like Carolina Herrera, Hellessy, and JW Anderson (among others).

Those ready to trade in traditional fall hues and holiday shades for this more unexpected color will find that they can scoop up styles from both designers and high street retailers. And to bring in a little festive shimmer à la Michelle Obama, just match up your yellow dress with a set of crystal danglers or a pair of glistening heels.

Continue on to shop a selection of dresses in the on-trend shade.