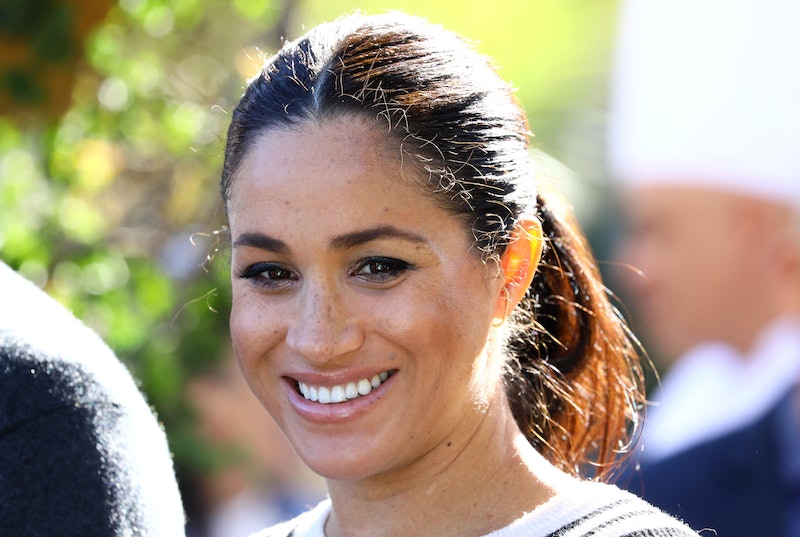 It's been quite the busy week for the royal family. On May 6, the Duke and Duchess of Sussex welcomed a boy into the world. Two days later, they offered a first look at the newborn during a brief photo call in St. George’s Hall at Windsor Castle, with the official name reveal following hours later. After a few days of silence since Weds.' big debut, a special snap appeared on the royal couple's Instagram account on Sun. — and it gave a small glimpse into how Meghan Markle celebrated her first Mother's Day.

Although Mother's Day in the United Kingdom was observed on March 22 this year, Markle and Prince Harry commemorated the holiday on May 12 — which marked Mother's Day in many other countries around the world, including the United States, Canada, and Australia, to name a few — with the sweetest second look at baby Archie.

On Sun., the new parents shared the cutest photo to their official Instagram account, which appeared to show baby Archie's bare feet cradled in Markle's hands. But the touching snap was made all the more special because it was taken in front of a bed of forget-me-not flowers, a favorite of Prince Harry's mother, the late Princess Diana, according to royal reporter Victoria Murphy.

"Paying tribute to all mothers today — past, present, mothers-to-be, and those lost but forever remembered," the caption read. "We honor and celebrate each and every one of you." The post also included a quote from the poem "lands" by Nayyirah Waheed, "My mother was my first country; the first place I ever lived."

It's likely Markle also celebrated the holiday alongside her own mother, who, according to People, flew to London before the Easter holiday to help prepare for baby Archie's arrival. Now, she's on hand to offer a bit of extra support for the new mom in the days following his birth, though the duchess did reveal on Weds. that Archie has the sweetest temperament. "He’s really calm,” she said as the royal couple debuted their newborn son to the public.