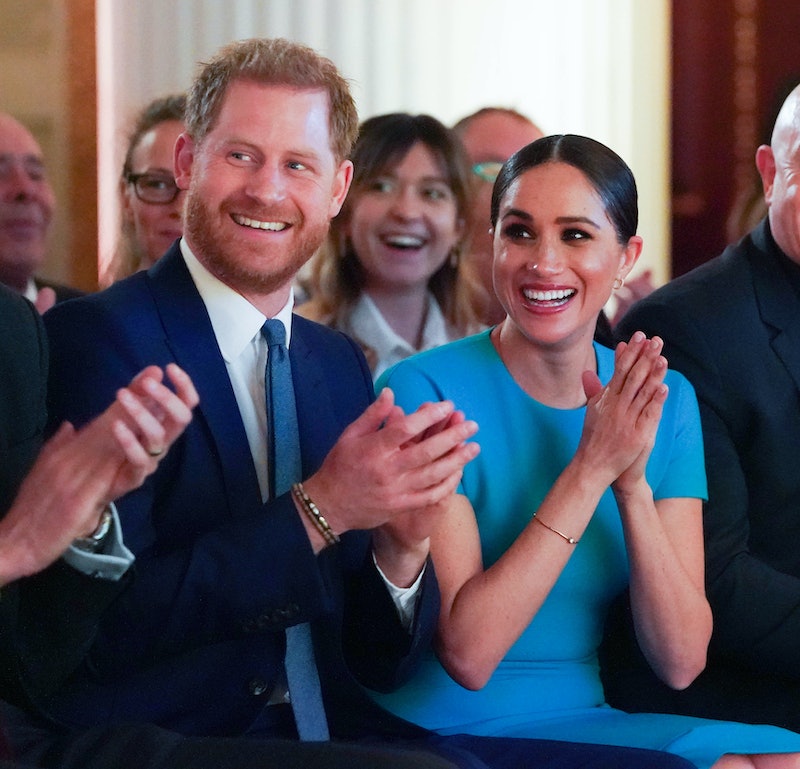 She's back! It's been a couple months since the Duke and Duchess of Sussex announced their decision to step down as senior members of the royal family, and the two have been laying noticeably low since. However, in their first public appearance together since the announcement heard round the world, Meghan Markle stunned in a bright blue dress that proved she's not done serving up all the style inspiration.

On March 5, the royal and mother of one stunned in a bright blue form-fitting midi dress by Victoria Beckham while attending the 2020 Endeavor Fund Awards in London. Markle accessorized the look perfectly with pointed navy Manolo Blahnik stiletto pumps (her faves!) and a boxy teal Stella McCartney clutch, making for a fresh and unique take on monochromatic dressing. As per usual, the Duchess went for an understated beauty look that felt natural and effortless. Her makeup was minimal, with the exception of glowing skin and a soft berry-colored lip. Markle's hair was pulled into a sleek low ponytail that was parted straight down the middle (a look that was seen on multiple runways throughout Fall/Winter 2020 fashion month).

The Duchess' bright outfit makes it a perfect candidate for spring dressing, particularly the upcoming wedding season. Although the dress is currently sold out, there are plenty of similar options to stock up on. You can go the Markle route and accessorize with coordinating colors or opt for more neutral-colored footwear and bags in tans and taupes. Either way, a bright blue dress will surely make a statement no matter where you choose to wear it or what you wear it with. It's definitely an item worth adding to your wardrobe this season.

This appearance marks one of the Sussex's last royal obligations, as their official transition to normal life is set to begin on March 31, according to the release from Buckingham Palace. The two are said to have future appearances with family members Prince William and Kate Middleton in the coming weeks, which means there will surely be more stylish moments coming from both the Duchess of Cambridge and Duchess of Sussex. Stay tuned and be on the look out for all the style updates and news.

The duchess is obsessed with these classic suede Manolo Blahniks — she has them in both black and navy.