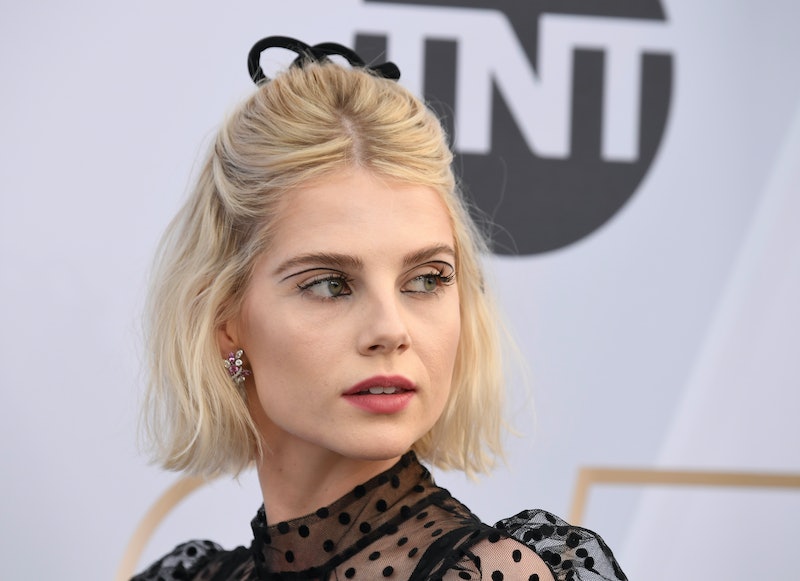 Lucy Boynton is what you might call a newbie on the awards show scene, but you'd never know it by how many times her name has already graced this season's best dressed lists. If you tuned into the Golden Globes and SAG Awards, then you're probably starting to get a sense of Lucy Boynton's edgy-feminine style. Her looks are perfect examples of how to work the emerging goth trend into your aesthetic in the subtlest way possible.

The actor has been launched into the spotlight since her acclaimed role in Bohemian Rhapsody. She's been on the "ones to watch" list for every awards show of the season, and so far, she's knocked every look out of the park.

Her outfits are extremely feminine — ribbons, bows, lace, ruffles, polka dots, and the lot — but also always feature a touch of edginess. Take her Critics' Choice Awards dress for example: it was baby-blue with yellow embroidery, had intense ruffle trim, and a pink ribbon belt tied in a bow around her waist. The British-American actor, however, balanced out the uber-girly look with barely-there makeup (an edgy choice in itself).

Start planning out your own edgy-feminine looks with these three Lucy Boynton moments, ahead.

Most recently, the Murder on the Orient Express actor stepped onto the SAG Awards red carpet in a floral gown with mesh, polka-dotted overlay. What's so edgy about flowers and polka dots, you ask? Well, aside from the pink florals, pretty much her entire outfit was black. The mesh layer was majestic and cape-like, and just below her eyebrows, Boynton had a thin swipe of edgy eyeliner. This ensemble is proof that girly patterns in black can add edge to a feminine look.

This sheer ruffled blouse is perfect for tucking and so reminiscent of the actor's SAG Awards look.

Translate Boynton's look into an everyday jumpsuit with this mixed-print one piece.

This tie-front wrap dress is the solution to your casual off-duty days.

The look Boynton went for during the Spring/Summer 2019 Valentino show is evidence that makeup matters (and so do shoes). The actor's floor-length dress was a sea of ruffles held together with a big bow on the neck, but her dark eye makeup and chunky black shoes balanced out the femininity of the look.

The bow-tied neckline and ruffled hem on this frock are absolutely Boynton-approved.

Opt for minimalism with this half-sleeved basic with a subtle tiered skirt.

Cut from textured silk-crepon, this flutter-ruffle dress is the chicest way to go frilly from head to toe.

Boynton channeled Wednesday Addams with the lacy black mini she wore to the Miu Miu show at Paris Fashion Week. It featured a frilly Peter Pan collar and an oversized bow on the neckline (yes, again). The actor paired it with black tights, feathery shoes, and a pink quilted clutch.

Channel the actor's Paris Fashion Week look with this bow-clad dress with a ruffled hemline.

A few things the actor is partial to: black, pussybows, and a babydoll silhouette. This mini has it all.