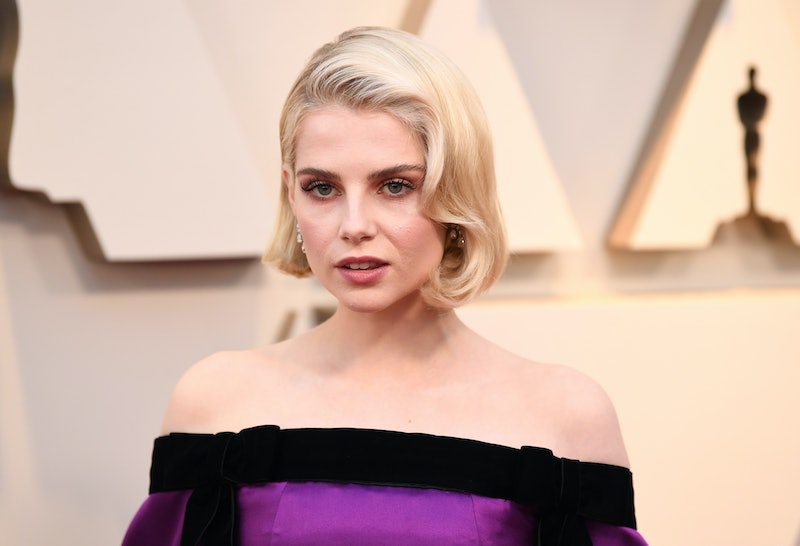 You should have known the Met Gala's particularly over-the-top theme would lead to some unorthodox hair colors. Laverne Cox and Kylie Jenner weren't the only ones who debuted statement hues on Mon.'s pink carpet. Lucy Boynton's Met Gala hair was an unexpected (but dreamy) shade of powder blue.

This Bohemian Rhapsody actor was the breakout star of 2019's awards season, so stakes were pretty high for her look at the biggest fashion event of the year. Though it must have been tough to top what she's already done — the ruffled Dior gown she wore to the BAFTAs, a tulle dress by Gucci at the Critics' Choice Awards, and that gothic-chic number by Erdem from the SAG Awards, just to name a few — Boynton and her team succeeded with the help of blue hair.

With the help of colorist Eddie Cook, the stylists left Boynton with an icy blue bob with perfect, lived-in texture.

"It was definitely important to make an impact with her Met Gala hairstyle, because of the Camp theme itself being 'extra' in every way," Cho says. "The most important thing for us, though, is to always have fun."

Boynton's blue hair was a fun accessory, indeed. Adorned with a whimsical flower crown that matched her floaty tulle gown (feathers and sequins included, of course), Boynton's bob was styled in loose waves, parted down the middle and tucked tightly behind each ear.

Cho says she teased the roots of her client's dry hair and then used Suave Professionals' Firm Control Boosting Mousse for extra body before securing the headpiece. The key to recreating the look, though, is starting with a clean base, according to Cho.

"People forget how important shampoo and conditioner can be," she says. So long to the ancient theory that dirty hair is better for styling. Boynton's Met Gala look starts with a good old-fashioned wash and condition, apparently.

If you're keen on trying out a statement style like hers this spring, a bit of temporary blue dye and texturizing spray should do the trick.