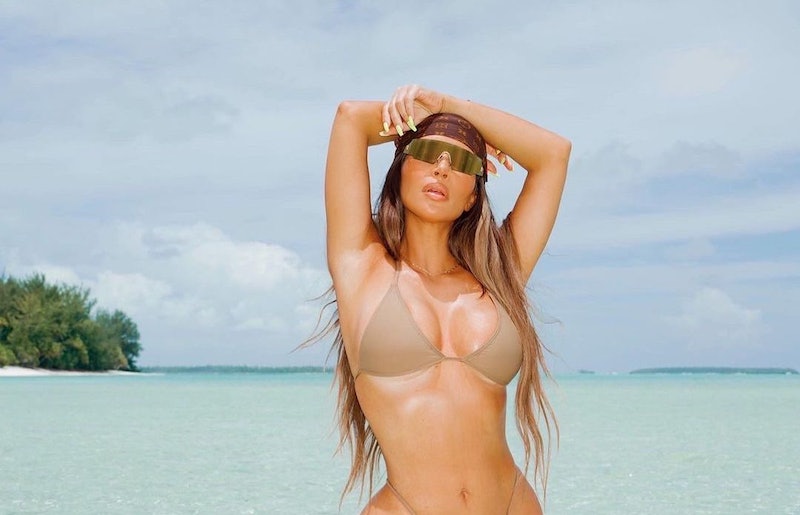 A week after turning 40, Kim Kardashian began spontaneously flooding Instagram with photos of herself clad in neon swimwear, amid family, all somewhere obviously faraway and tropical. Those who weren't outraged by them scrolled through the snapshots with envy — who wouldn't want to be Kim Kardashian, in her beachy golden brown hair and a chipper lime-green manicure, on a $1 million vacation?

The pictures were so polarizing that for possibly the first time in 10 years, the beauty mogul's hair change went virtually unnoticed. However, her longtime hairstylist, Chris Appleton — who was, of course, present on said trip — made sure we wouldn't miss it, revisiting Kim K.'s caramelized mane weeks after returning from The Brando.

Although the lightened-up shade made for a befitting vacation accessory, it seems as though its intended purpose was to help promote her KKW Beauty birthday collection. Opalescent, inspired by Kardashian's birthstone, launched on October 21 with eight Semi-Matte Liquid Lipsticks, a 10-pan pressed eyeshadow palette, and more.

The just-surfaced behind-the-scenes photos feature the brand founder in a white bikini top, wearing her signature nude lip and a hair color worlds away from her usual jet-black shade, only discernible now that it's not hidden underneath a bucket hat or soaked in seawater.

Appleton is responsible for some of the hair chameleon's most memorable looks — the "Cher hair," the high ponies, the wet look, the platinum dye jobs, and every time she's gone blue, pink, red, and so forth. He never sends her out with a hair out of place, but here she is in French Polynesia, giving us what looks to be an anti-style.

Kardashian eschewed all elaborate slicked-back ponies, intricate braids, and sleek blowouts for a week of quintessentially beachy, carefree waves. With the exception braided bangs, she left her long, golden brown hair down and mermaid-like throughout all five days.

It barely compares to her boldest hair colors — and it isn't even the first time she's gone semi-blonde this year — but this latest Kim Kardashian take on bronde is delightfully subtle and ever-worthy of copying. When you're ready to adopt it, a look back at her 40th birthday blowout vacation will provide endless hair inspo and a healthy dose of escapism.