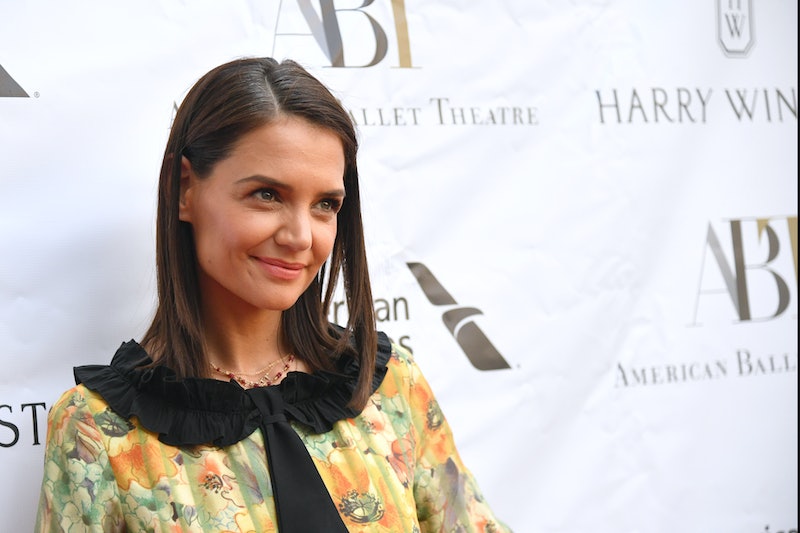 It's nearly summertime, which means your shopping list probably goes something like this: floral dresses, cozy slides, woven bags, and sunglasses. Katie Holmes pretty much has you covered in all the above. Better yet, you won't have to pay more than $30 for her favorite warm-weather accessory.

The actor was spotted walking in her Manhattan neighborhood on Tues. while wearing the quintessential spring look. Holmes sported a chiffon, floral-print maxi shirtdress with black slides and a circular handbag made of woven straw strapped across her body. Her most beloved accessory, however, are the sunglasses.

Privé Revaux, the brand behind the sunnies, has been a major staple in the actor's wardrobe since her boyfriend, Jamie Foxx, was named one of its ambassadors in 2017. In the past, she and Foxx have both been partial to the Kennedy — which Foxx actually designed — but lately, she's swapped them out for the sleek Casablanca style instead.

Holmes first debuted her new favorite sunnies back in March, during a quick shopping trip at Whole Foods, then continued wearing them while out with daughter Suri later in the day. While she does tend to alternate between another beloved pair of aviators, the Casablanca is without a doubt her wayfarer of choice.

The best part about the actor's eyewear? They're easy on the budget. Privé Revaux's whole philosophy is to make quality, designer sunglasses accessible to everyday people, so every style (there are more than 100 to choose from, by the way) is only $30.

So, before you go spending a fortune on your 2019 sunglass collection, get yourself a pair of Holmes' favorites (and more affordable options), ahead.

Holmes' go-to sunnies are polarized to provide you full protection from the sun. They're limited edition, too, so you better hurry up.

When the cat eye silhouette meets the classic wayfarer, you get a super-cool catfarer. Opt for these summer staples with tortoiseshell frames.

These simple, matte black square-frame sunglasses will literally never go out of style (hence the name).

Any Ray-Ban fan who has a reputation for losing frames (*raises hand*) will appreciate this designer-inspired look for less than $30.