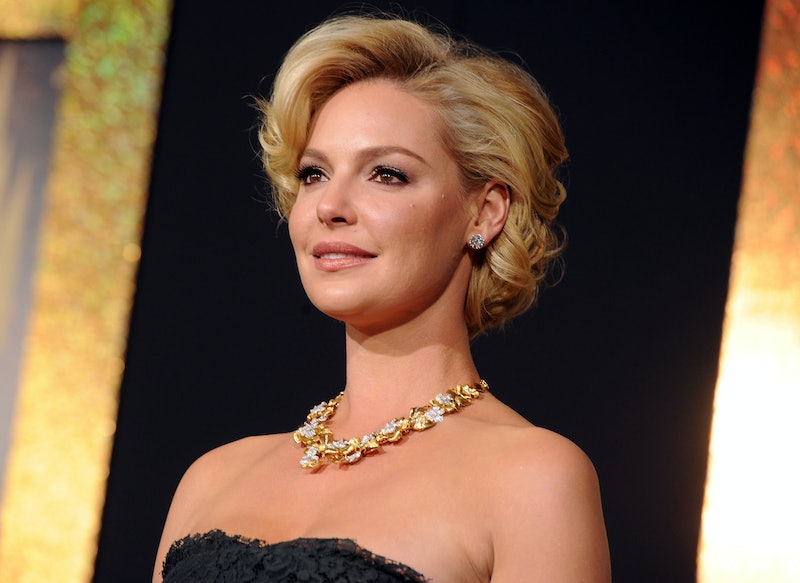 As fall inches closer with each passing day, leaves aren't the only thing changing color. The internet has been promptly sent into a tailspin thanks to consecutive hair makeovers in Hollywood, from shaggy new fringe on Harry Styles to Charlize Theron perfectly rocking a freshly-chopped, multicolored bowl cut. And now, another actor has hit up the salon for a major switch-up. Known for her signature blonde hair, Katherine Heigl is officially brunette, and the darker hue is surprisingly fitting for the 27 Dresses star.

Heigl crossed over to the dark side for her role in Netflix's upcoming series adaptation of Kristin Hannah's novel, Firefly Lane, in which she'll play the character Tully Hart. The 40-year-old took to Instagram Stories to share the step-by-step process from the salon, which turned out to be a pretty lengthy one. "Well...It took 3 hours and 3 processes but…I’m a brunette!" she shared, showing off a shiny head of raven tresses and a bold red lip.

Despite proving her affinity for pulling off everything from honey blonde to platinum over the years, Heigl clearly has what it takes to go super dark. And judging by the comments section on her latest feed post, her 3M followers tend to agree.

As proven by the marathon of new 'dos hitting Hollywood lately, it seems to be the time for a bold aesthetic switch-up. Traditionally, the commencement of fall triggers a sudden urge for PSLs, plush scarves, and an unplanned phone call to the salon. So if you're suddenly dreaming of rich shades of chocolate or chestnut for the season ahead, you're certainly not alone.

Ahead of your visit, you'll want to arm yourself with a few key products to keep your hue lively and rich. Shop The Zoe Report's selection of color-enhancing products that will help you get the most out of your next color appointment, ahead.

Keep your color bold and bright by using this reparative shampoo that will keep your dye from fading.

Avoid unwanted copper hues with the help of these nifty blue droplets from IGK.

Banish damage and combat hair fatigue with this top-rated remedy from Aveda.

If you have cold feet, get a feel for your desired shade with the help of this semi-permanent treatment from dpHUE.

Add definition and shine to your new brunette locks with the help of this holy grail oil from Ouai.