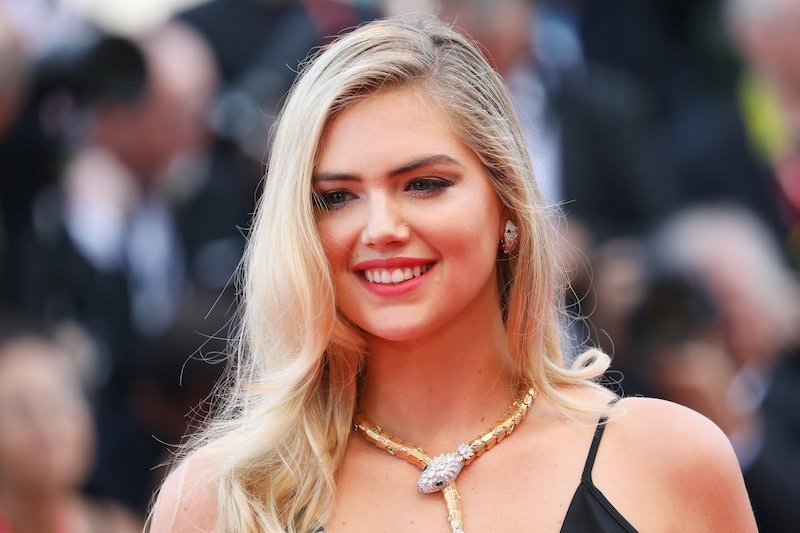 The 2019 Venice Film Festival is fully underway — and it's been every bit as glamorous as you'd expect. On the red carpet, big names like Iman, Candice Swanepoel, Martha Hunt, and Laura Dern made quite the splash with their lavish gowns and equally striking beauty looks. But it's the getups that debuted off the carpet that you'll really want to pay close attention to for two reasons. First, said outfits prove to be a tad bit more wearable in your own day-to-day, and secondly, you can actually get your hands on some of the pieces without breaking the bank. Case in point: Kate Upton's favorite white mules, which she's worn nonstop while making her film festival rounds this week.

The most intriguing thing about Upton's style is the fact that you never know what ensemble she'll churn out next. Sure, the key style theme falls into the more down-to-earth category, but every now and then, she'll throw a major fashion curve ball your way. One day she'll be wearing an easygoing jeans-and-tee combo, and the next, she'll be spotted in sophisticated frock.

The latest example of her wide-ranging fashion sensibilities came on Aug. 29, when Upton arrived via boat to the 2019 Venice Film Festival, wearing a white, two-piece skirt set with fringe detailing. Chic doesn't even begin to describe the outfit, which could easily be worn down the aisle, too. A Gucci bag and optic white mules rounded out the look.

A few hours later, the model stepped out in an equally covetable look, though it was certainly a bit more casual than this elegant skirt suit. A green mini dress from Faithfull the Brand was the hero piece of the getup, with the Gucci bag and the white mules as the common denominator for the two festival looks on Thurs.

Sleek, simple, and understated accessories are the best to bring with you on vacation because they pair well with everything — and when you're packing space is limited, having pair-with-everything accoutrements is an absolute must.

Ahead, shop Upton's exact Mercedes Castillo mules, plus more of The Zoe Report's favorite white shoes that will go with everything in your wardrobe.

It's easy to see why Upton is obsessed with these mules. They have the coolest sculpted, stacked heel and feel so modern yet timeless.

Don't yet own a pair of white slingback kitten heels? Then you'll want to add these Zara pumps to your cart straight away.

These might be the coolest flip flop sandals on the market. Wear them with everything from jeans to your go-to LBD.

You're going to want to wear this strappy heels as long as you can — they're simply gorgeous.