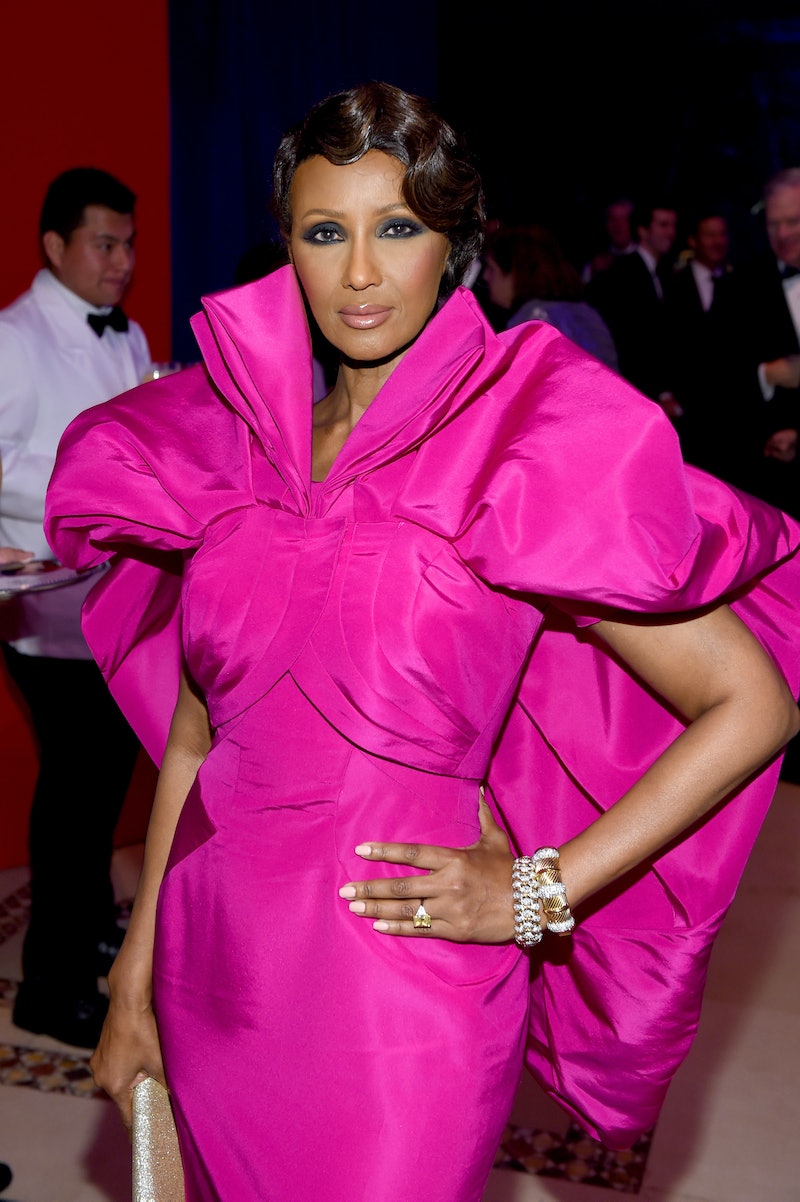 Fashion lovers feasted their eyes on a stunning spread of couture in Italy on Weds., as a slew of extravagant gowns appeared on the red carpet for day one of the 76th Venice Film Festival. Iman's looks could easily be described as the most jaw-dropping of all, because the legendary supermodel made an opulent splash in two separate-yet-equally extra Valentino couture gowns. The first — featuring red, white, and blue feather trim and a bird-and-leaf motif — was pure art at the opening ceremony, proving no look is too major for the iconic covergirl.

Hours later, the Somalian beauty donned the second Valentino look, a royal purple floor-length gown adorned in head-to-toe ruching, arresting the crowds with ample amounts of drama. After all, the model wasn't only there to serve looks. She was given the Franca Sozzani Award for her lifelong humanitarian work spanning partnerships with The Children’s Defense Fund, Action Against Hunger, and Raise Hope For Congo. Rocking a sharp bob with both gowns, Iman opted for fire-red lipstick for daytime before switching to a vampy merlot hue by night.

After stunning in the jaw-dropping couture gowns, the mother-of-two appeared spritely in a fresh and breezy Tommy Hilfiger look at the Green Carpet Fashion Awards lunch on Thurs., where luxury brands were honored for prioritizing eco-friendly ethos. With her luscious hair styled in free, natural curls, the supermodel further proved her endless versatility in fashion and beauty alike.

As an unparalleled beauty chameleon and a legendary fashion icon, Iman's red carpet style isn't exactly applicable to everyday living, but you can still channel her gorgeous aesthetic throughout your day-to-day wardrobe. Ahead, shop The Zoe Report's selection of Iman-inspired pieces that have hints of her Venice Film Festival ensembles scattered throughout.

Feathers can be intimidating, but these straight-leg Prada jeans are the perfect amount of extra.

Need to take your night-out look up a notch? Add a dash of color and a dose of drama with this beaded pouch purse from Attico.

If you don't have any upcoming galas where you can serve Iman-level drama, this shimmery, ruffled mini dress is a toned down version of the same royal vibe.

Go bold and incorporate violet into your fall lineup, then pair with another jewel-toned piece for a lesson in color-blocking.

Co-ord sets are slowly making their way into fall territory, and this tiger-print option from Ganni is so good.

Leave it to Ref to deliver on all of the flouncy dresses and co-ord sets your heart desires.