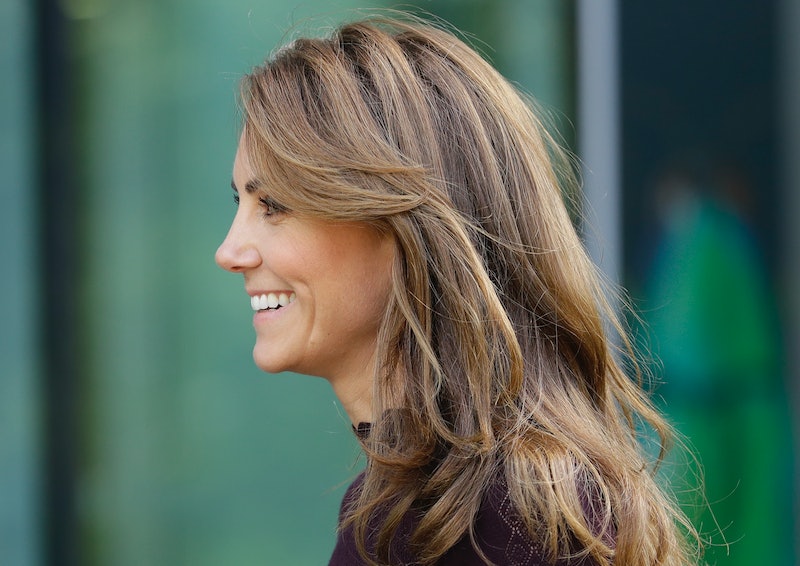 Outside, nature's colors are slowly changing from the once-vibrant summertime greenery to the classic autumnal hues of red, orange, and brown. It's just how the seasons go, and even though it's common for one's wardrobe to mimic this annual color shift (think: you've probably swapped out that bright-orange sweater for a burnt-orange one), keeping some of summer's fresh, leafy hues within arm's reach is totally recommended — and as it turns out, this style sentiment is also royalty approved. That's right, Kate Middleton's recent royal tour of Pakistan looks are serving up an extra helping of verdant goodness, confirming green is the color of the season.

Middleton and Prince William officially kicked off their royal tour of Pakistan on Oct. 14 — a few weeks after Meghan Markle and Prince Harry wrapped up their rounds in South Africa. According to an official statement from Kensington Palace, the Duke and Duchess of Cambridge's tour "will largely focus on showcasing Pakistan as it is today — a dynamic, aspirational and forward-looking nation."

Middleton has already proven her style prowess since Mon.'s tour kickoff, with many of her outfits embracing Pakistan's culture in such a beautiful way. Aside from honoring the country's traditional attire, there's another common thread in many of the duchess' royal tour looks: Plenty of them hit on this season's ever-popular green color trend.

On Oct. 15, Middleton stunned in a deep, rich emerald gown for a special reception hosted by the British High Commissioner Thomas Drew at the Pakistan National Monument. Her Tues. ensemble proved that though she's definitely mastered the art of daytime attire, her strengths really shine when it comes to evening wear.

The duchess' floor-length frock was courtesy of Jenny Packham. It was doused in thousands of glittering green sequins and featured long-sleeves, a rounded neckline, and a fitted bodice finished with a sequin belt. She rounded out the evening look with chandelier earrings and a half updo.

Earlier in the day, Middleton and Prince William met with the Prime Minister of Pakistan, Imran Khan at his official residence. For the occasion, the duchess opted for another verdant number: a green Catherine Walker coat dress, which she wore over cream-colored trousers. Emerald suede pumps anchored the daytime look.

It's no secret that green is one color trend that's been receiving lots of love as of late, with various shades of the verdant hue, from a slime-y iteration to a rich emerald, cropping up among the celeb (and royal) style scene almost daily.

But there's also another reason Middleton has been keen to green during her royal tour of Pakistan: to represent the country's green flag. Stay tuned for more verdant-hued ensembles to debut in the coming days.