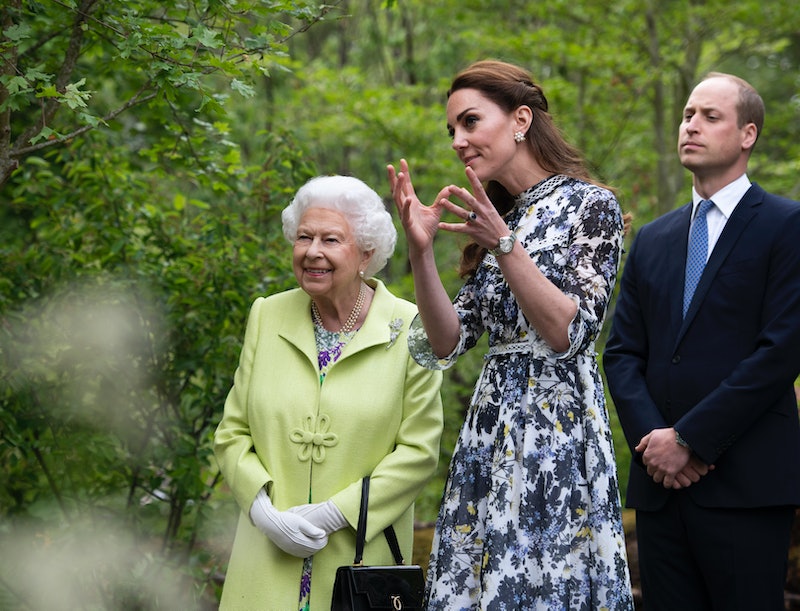 As it turns out, the Duchess of Cambridge and her grandmother-in-law have more in common than thought. Now that Buckingham Palace is in full bloom, Her Majesty and Her Royal Highness have been bonding nonstop over their mutual love of spring flora. The pastel outfits Kate Middleton and the Queen wore to Tues.'s Royal Garden Party show they're even starting to dress alike.

A day after these two were spotted strolling through the Chelsea Flower Show together, admiring Middleton's "Back to Nature" garden creation, they made a joint appearance again (well, sort of) at a get-together Queen Elizabeth hosted at Buckingham Palace.

A patron of the Royal Horticultural Society, the 93-year-old monarch has always been a known fan of plants (even taking it upon herself to personally oversee the regeneration of Frogmore Cottage's gardens before Meghan Markle and Prince Harry moved in). Now, Middleton looks to be following in her footsteps.

The Duchess made her entrance at the Queen's Garden Party wearing an outfit her grandmother-in-law could have picked out, herself. You know Her Majesty loves a colorful ensemble (perhaps even more than she loves a bouquet of fresh flowers). On Tues., Middleton and the Queen coordinated — albeit probably accidentally — in pink and blue pastels.

Middleton opted for a pleated Alexander McQueen coat dress that incorporated a springy pale-pink color into her usual silhouette. She accessorized with a floral fascinator by Juliette Botterill, a neutral clutch by Loeffler Randall, Gianvito Rossi pumps, and pearl earrings that once belonged to the late Princess Diana.

The Queen, also wearing a floral hat and pastel coatdress, coincidentally matched. Her sky-blue jacket allowed just a glimpse of a pink botanical-print dress underneath and she wore it with a brooch and gloves, per usual.

'Tis the season for pastels, according to the women of Great Britain, so channel the royal duo in these pretty pale shades, ahead.

Nothing says spring more than this lavender pleated midi. Middleton and the Queen would surely approve.

Dress for warm weather in a sunshiny hue. Make this relaxed maxi your garden party go-to.

Incorporate the royals' favorite print, florals, into your pastel dresses. This midi features a ruffled hem and pretty tie sleeves.

Keep it simple with this Middleton-inspired pale-pink wrap dress with whimsical pleats.