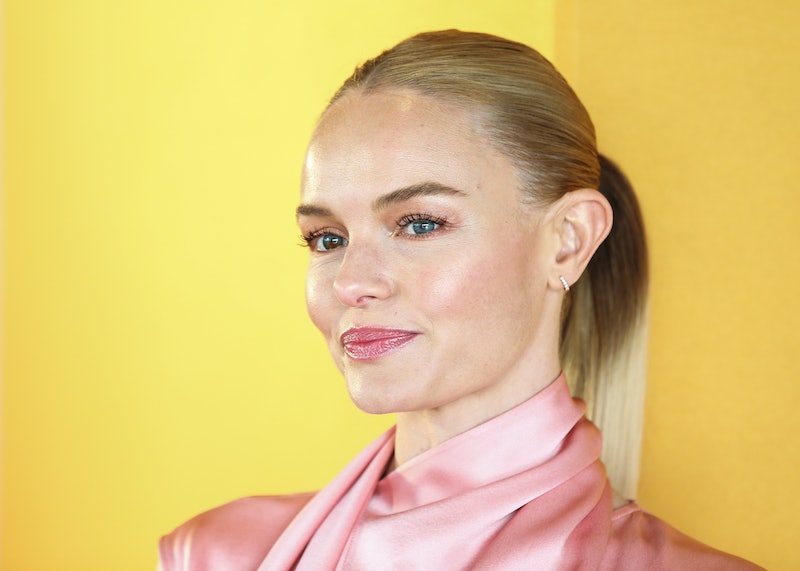 Whenever Kate Bosworth attends any sort of red-carpet outing, sartorial magic ensues. The 36-year-old style icon certainly knows the makings of a casual-cool street-style getup, but she shines extra bright when she takes on formal dressing. The latest example of the latter? Bosworth's pink pant suit ensemble that sparkled from every angle — literally. That's because her trousers were adorned with hundreds upon hundreds of glittery pink sequins that glistened with each flashing camera light.

Bosworth jet set down under over the weekend for the Veuve Clicquot Business Woman Awards. The event, which was held at the Museum of Contemporary Art in Sydney, Australia on July 2, pays homage to Madame Clicquot and honors women with pioneering skills and an entrepreneurial spirit. Bosworth, who herself has been working since age 14, was there to deliver the keynote address at the annual gathering.

On stage, Bosworth looked every bit the goddess she is in a two-piece suit from Sally LaPointe's Resort 2020 collection. The dreamy pink set consisted of a satin scarf neck dress with a waist belt and a pair of high-waisted trousers that were covered in glittery, candy-colored sequins. Yes, it was as dreamy as it sounds, and yes, one peek at the actor's exquisite outfit and you'll be inspired to don some sequins this summer, too.

Though Bosworth's shoes of choice were hidden underneath the extra-long hem of her trousers, she likely wore a pair of strappy heels that gave her a bit of height. The 36-year-old tastemaker opted for a beauty look that was a chic and elegant as her sequin set. A soft-pink lid played off of her suit's sweet pastel hue while her slicked-back ponytail was as refined as her silk dress.

There are two main takeaways from Bosworth's sparkly suit ensemble. First, it's the fact that the dress-over-pants combo — a pairing that counts the likes of EmRata, Amber Heard, and now Bosworth as fans — is officially here to stay for another season. And secondly, the actor proves that sequins can, indeed, look tasteful and elegant — it's all about working them into your outfit in moderation.

Ahead, shop Bosworth's exact suit while it's still in stock, plus more of The Zoe Report's favorite sequin-embellished pieces that

This Bosworth-approved dress is available in two other dreamy hues, including a baby blue and a classic brown.

Try to work these party pants into your evening ensemble this summer. Either style them with a crisp white tee or make like Bosworth and throw the satin scarf dress over them.

Go for some understated sequins with this sparkly Attico pouch. What's more, Carrie Bradshaw would undoubtedly reach for this bag, too.

These sequin Bermuda shorts are officially the best thing you'll discover all day.

For a memorable going-out look, look no further than this feather-trimmed top that's doused in silver sequins.