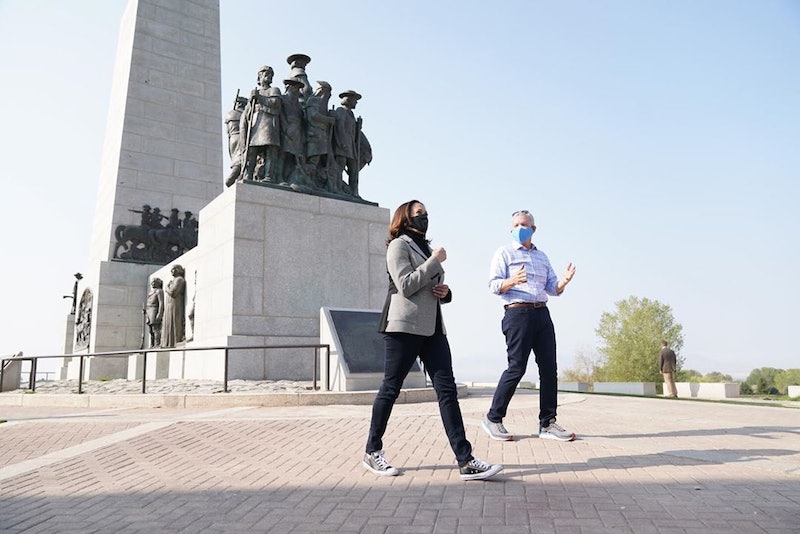 Campaign trail fashion has long been the subject of careful study. For her first presidential debate in 2016, Hilary Clinton wore a pair of unapologetically feminine, bow-tied kitten heels from Miu Miu, which were a quiet protest in their own right. Four years later, the next female candidate to shake up the race is also using footwear as a vehicle — but hers, however, are a take on a different approach. Calling on sensible styles from classic American heritage brands, Kamala Harris' shoe choices are making a massive statement — and they're probably already parked in your closet.

On Sep. 7, Harris' Vice Presidential campaign officially kicked off with her first in-person event in Milwaukee, for which she sported a pair of classic low-rise Chuck Taylors. In a video clip she posted from the occasion (which has received some 1.6 million views), Harris aptly wrote: "Laced up and ready to win." From that moment on, Converse sneakers totally caught ablaze across the internet, seeing an 88% uptick (along with Timberlands, Harris' other default pair) in searches between Sep. 7 and Sep. 22, according to Klarna. Even her sister, Maya Harris, joined the conversation: "Chuck Taylors trending lol. (Yes, they are in fact her go-to.)," she wrote in a Sep. 7 tweet.

As for her Timberlands, the Oakland native wore them for her visit to the devastating wildfire burn sites in Fresno, California; and again in 2019 for her bus tour through Iowa. Harris tends to call on the brand's iconic "yellow boot" for her more outdoorsy to-do's, bringing a practical edge to "shackets" (shirt-jacket) and Oxford blouses alike.

As for why the ordinary shoes have drummed up so much buzz, there's a few possible reasons. First and foremost: her Timbs and All Stars made off-duty footwear, on-duty appropriate. It's exactly the reassurance that the masses needed as they slowly begin to return to work, many in ensembles entirely different from before the pandemic. Since then, footwear has categorically been the last thing to catch up, with stylish men and women wearing sneakers of all kinds with suiting and other polished clothing.

On the other hand, wearing sneakers and tactical boots is also quietly rebellious. With them, Harris subverts expectations that women in politics should appear in certain clothing (sleek heels, for instance) in order to compete with men — who are, most often, in flats. Harris' boots-on-the-ground look is a reminder that women can do it all, and more — with the help of fashionable, wearable clothing.

While Timbs are slightly rarer than her Converses, neither are just a post-pandemic solution. Her affinity for All Stars runs deep — with pairs in carbon gray, eggshell, and white all appearing on her 2019 campaign trail as well. According to The Washington Post, she's even hinted at a sequined pair — which, if we're lucky, she'll wear for her Oct. 7 debate with Mike Pence.

To browse the most practical styles, all of which are plucked directly from her footwear repertoire, continue ahead: