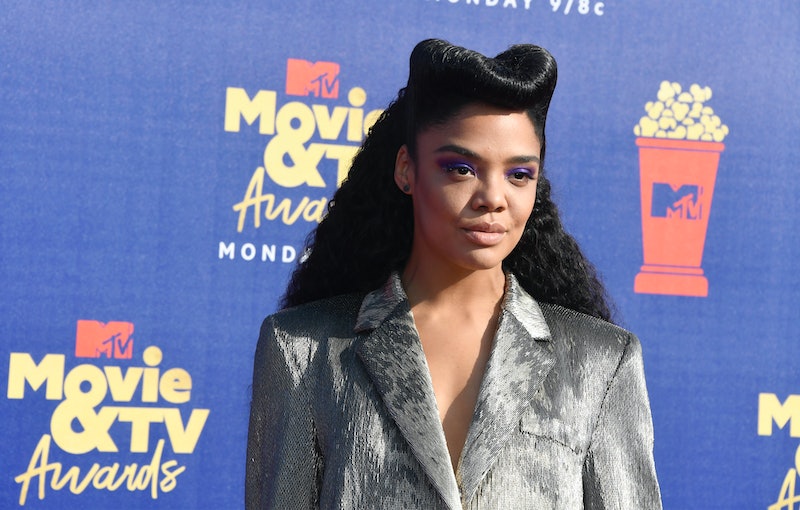 The jaw-dropping red-carpet style and beauty inspiration just keeps streaming in. The latest can't-miss event to serve up majorly memorable fashion and makeup moments? The MTV Movie & TV Awards, which took place Sat. evening at the historic Barker Hangar airport in Santa Monica, California. Everyone from Jada Pinkett Smith to Aubrey Plaza turned up in getups that's shined and sparkled from every angle, but there were two attendees, in particular, that really stood out — and not because of their sequin-embellished frocks. That's right, Elisabeth Moss and Tessa Thompson's 2019 MTV Movie & TV Awards beauty looks, which were all about glowing skin, stole the show at the June 15 gathering.

Before any major red-carpet outing, celebs typically tend to pencil in some time with their go-to manicurist; they book an appointment at the hair boutique to freshen up their cut and color; and last but certainly not least, they like to prep their skin by scheduling in some time with their most-trusted facialist. For Moss and Thompson, the latter played a key role in their MTV awards show looks, with both actors stopping by celebrity facialist Joanna Vargas' New York City salon just a few days prior to the Sat. ceremony.

Moss and Thompson received Vargas' cult-favorite treatment, dubbed The Triple Crown Facial, which, according to the press release, is a "micro-current facial to sculpt the jawline and provide younger-looking skin and refreshed eyes." The three-step skin prep (hence the keyword triple) starts with microdermabrasion to remove dead cells and surface dirt, followed by a micro-current to drain puffiness and tighten skin and reshape the face and vitamin-spiked oxygen for that lit-from-within radiance.

The two actors also tested out the newest addition to Vargas' salon menu: a Body Booster treatment that drains the body of excess puffiness caused by stress, lack of sleep, and travel.

Moss showed off her post-facial glow on Instagram, sharing a snap of her with Vargas on June 13. "Thank you my dear friend @joannavargasnyc for the skin love!! 💖(and also I'm moving into your beautiful NYC spa, I’ll just sleep on the couch don’t mind me you won’t even know I’m there I promise 😋)," she captioned the photo.

For the MTV Movie & TV Awards, Moss opted for understated makeup in the form of soft, silver eyeshadow and an easy, everyday lip gloss. She rocked a velvet mini architectural dress by Balmain, which features a fishnet sleeve and a silver, sequin-embellished serpent on the front.

Thompson paired her glowing skin with a super-bold purple lid — a beauty approach that's right in line with 2019's color makeup trend. The rest (read: her lips and checks) were kept neutral and understated, as not to take away from her eyes, her perfect complexion, and her sequin-adorned blazer dress.

Want to emulate Moss and Thompson's radiant awards show skin? Do so with The Zoe Report's roundup of glow-enhancing products. Shop them all, below.