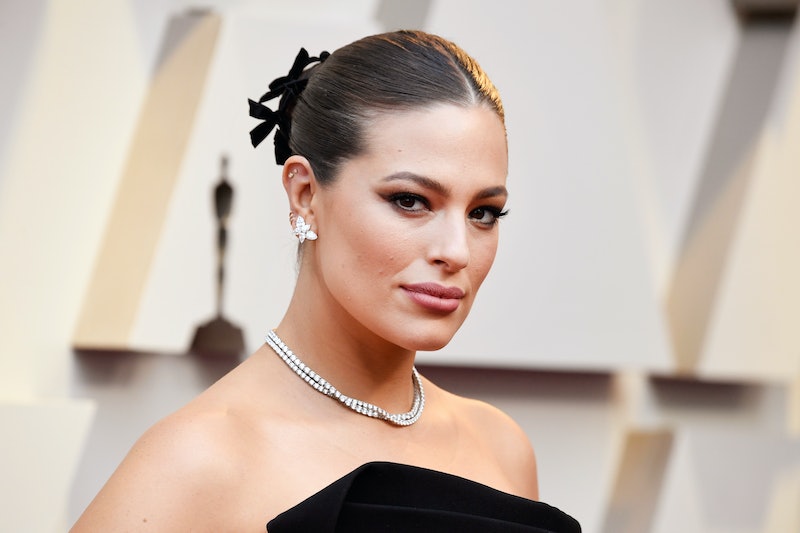 Whether it's a subtle trim or a bold chop, sometimes you just need a hair change to liven up your look. Take Ashley Graham's 2019 Oscars haircut for example. Cut by celebrity hairstylist Justin Marjan between the ceremony and the after party, Graham's new shoulder-length waves completely transformed her red carpet style.

The model hosted the Oscars red carpet on Sun., where she got to chat with nominees, winners, and attendees live on ABC before the show. Graham stunned at the ceremony in an asymmetrical, strapless gown by Zac Posen, flawlessly paired with a bow-adorned, slicked-back bun.

Her Oscars style took a full 180, though, when Marjan opted to cut Graham's hair during her wardrobe change. A major contrast from her original gown and updo, the 31-year-old arrived at the Vanity Fair after party sporting a two-piece set by Danielle Frankel Studio and a wavy side part that just barely grazed her collar bone.

Marjan revealed Graham's piecy, texturized cut in a behind-the-scenes shot on Instagram. "Gave @ashleygraham another ✂️ chop ✂️ last night between the Oscars and the after parties!" she captioned the photo. "I told her short hair is addicting!"

If you, too, are wanting to change up your look ever so slightly, the model's cut is the perfect inspiration. A dramatic pixie, a blunt bob, or full bangs may seem too far out of your comfort zone, so start small by shedding a few inches and changing your part à la Graham.

You'll be surprised at how big a difference a little chop can truly make. The best part? You can style your new length in loose waves, soft curls, or sleek and straight. Ahead, shop the products you'll need to add to your haircare collection to get the most out of a subtle haircut.

Spritz your hair with this sea salt spray for a tousled, beachy look. Infused with notes of vanilla, coconut, and amber, your hair will smell just as good as it looks.

This product is formulated to add texture, volume, and definition, while also hydrating and softening your ends.

Work a small amount of this creamy formula through damp hair to create soft waves, minimize frizz, or add some extra hold to your updo.

Wrap your hair around the titanium barrel for a faster curling process. Designed with four heat settings and automatic shut off, it's equal parts convenient and effective.

Forego hot tools all together with this air dry spray. It will reduce your drying time, prevent frizz, and protect against damage.