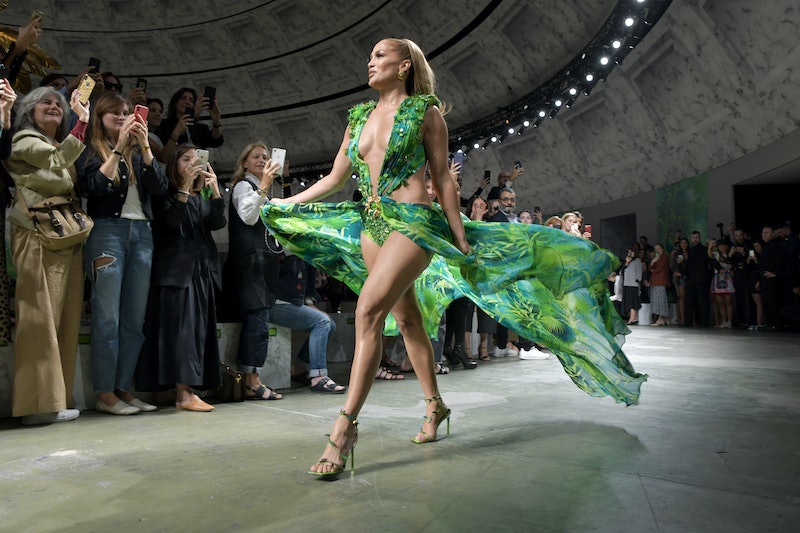 A moment so iconic that it quite literally broke the internet, Jennifer Lopez's Versace dress was the most popular search query back in the early '00s; hence web search-engine Google had no choice but to create Google Images. It's true. Take into account that prior to the performer's, appearance in the dress, it had been worn three times before (even by Versace herself at the 1999 Met Gala). And while all looks were executed so differently, it was J.Lo's take that sent the masses into a frenzy, making the Versace house's decision to give it another go very appropriate.

Fast forward to 2019, the infamous and iconic "Jungle" motif just made a major comeback in the midst of Milan Fashion Week (after nearly two decades since its debut) in a way that feels like everything truly does come full circle. Chief Creative Officer, Donatella Versace called Lopez out using Google Assistant to close the show — leaving both the fashion industry and the rest of the world in complete and utter amazement. J.Lo strutted down Versace's Spring/Summer 2020 runway in an updated, but equally beautiful, version of one of her most memorable ensembles.

Serving up the same sort of instant appeal, the recreation of such a dress comes as no surprise. Donatella, is known for her ability to tap into the archives to keep the memory of the ever-talented Gianni Versace alive well after his death, presenting pieces that still feel so relevant almost 20 years later. (See also: the instantly-recognized Baroque print and safety-pin dress worn by Elizabeth Hurley in 1994.)

While the lush pattern and Lopez's stunning physique remain the same, there are some very apparent changes that were made to the gown, itself. The once long-sleeve silhouette has been altered for a sleeveless look, in a design that appears to be cutout at either side— making it even more revealing than the one she wore during the 2000 Grammy Awards, if possible. Not to mention, the updated version has ultra luxe detailing to give it an ornate feel for the new season.

As for Lopez, the overall styling of the dress seems to have strayed only slightly from the original appearance, with the bouncy half-up, half-down hairdo and minimal accessories. J.Lo's shoes, however, (which were a moment in and of itself), remained the same in theory — showcasing a barely there silhouette that wrapped around the ankle to resemble writhing plant vines.

After taking in every element of what had just occurred, the style set stood to applaud the new collection and Versace (the woman), who took her final bow. When all was said and done, there's no doubt that the this duo is truly a magical combination. And for a moment, the year was 2000 and fashion history was made, yet again.