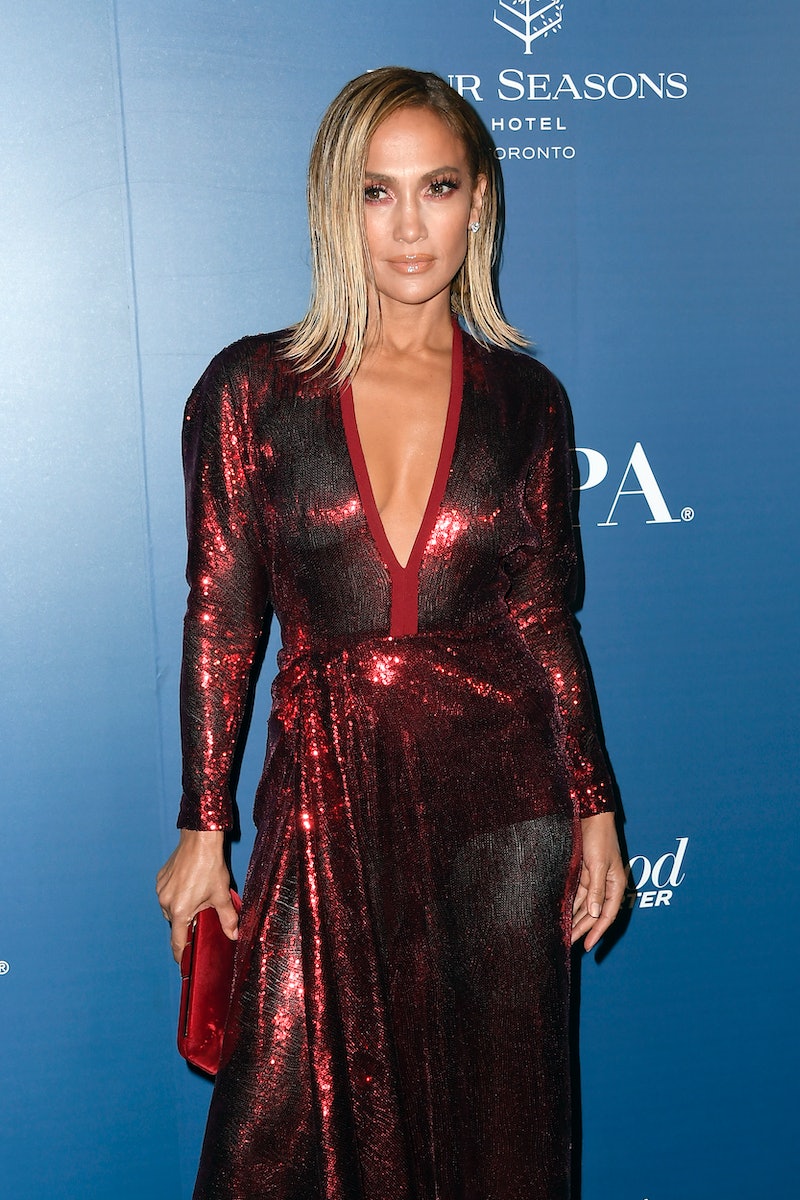 Certain long-held fashion rules are simply meant to be challenged and broken with time — if you dare, of course. And if you follow the celeb street-style scene, you'll know that there are a handful of tastemakers that always throw a sartorial curveball your way, never playing it safe and always leaving eagle-eyes fans on their feet. One such example is Jennifer Lopez and, more specifically, her Toronto International Film Festival outfit, which was as rule-breaking as it was chic — and you're going to want to follow her lead, stat.

The countdown to Hustlers' U.S. release date is officially underway. In T-minus four days, you can finally catch J. Lo on the big screen again, starring alongside an all-star female ensemble that includes Cardi B, Constance Wu, Julia Stiles, Keke Palmer, and Lili Reinhart. Until the film officially drops, though, the cast is quite busy doing their usual press rounds, and with these press stops comes an endless stream of incredible style inspo.

Your eyes may be peeled on the New York Fashion Week outfit scene, but you should also pay equal attention to what's currently going on in Canada right now. The 2019 Toronto International Film Festival kicked off on Sept. 5 and will go until Sept. 15 (i.e., ten straight days of standout sartorial moments to relish in, in addition to NYFW).

The headline-making getup that set the sartorial world ablaze over the weekend didn't debut on the NYFW runways or on the Big Apple streets, but rather in Canada and was courtesy of Lopez.

The music icon and actor stepped out on day three of the annual film extravaganza — and she was a vision in white (wait, what?). Sure, Labor Day has come and gone in the blink of eye, signaling this idea that white staples can no longer be worn, but Lopez is clearly not set on following this notion.

J. Lo stunned in a crisp white two-piece by Solace London, which consisted of a pair of high-waisted, belted trousers and a coordinating top with an extra-voluminous off-the-shoulder neckline. A pair of crystal-adorned mesh pumps by Christian Louboutin, plus a handful of extra-glitzy jewels (like a Yvan Tufenkjian diamond ring, Le Vian diamond tennis bracelet, and Anabela Chan diamond cluster earrings) rounded out her simple yet glamorous ensemble flawlessly.

Allow Lopez to inspire you to break some rules this season by sporting white — to any degree. Ahead, The Zoe Report's favorite fall-friendly ivory pieces to scoop up now and wear all season long.

This white hoodie is destined to be a fall favorite. Wear it with jeans, a cool skirt, or over your go-to summertime maxi dress.

Trade your blue denim jacket in for this cool white version. Bonus: The ivory topper is right in line with fall's utility trend.

Everyone should own a pair of crisp white pants — they're a true wardrobe staple.

Add a dash of white to your fall outfits with these Dr. Martens boots.

Say hello to the coziest (and cutest) cardigan on the market.

Picture this coat paired with white trousers, a white tee, and cool white sneakers when the temps drop.