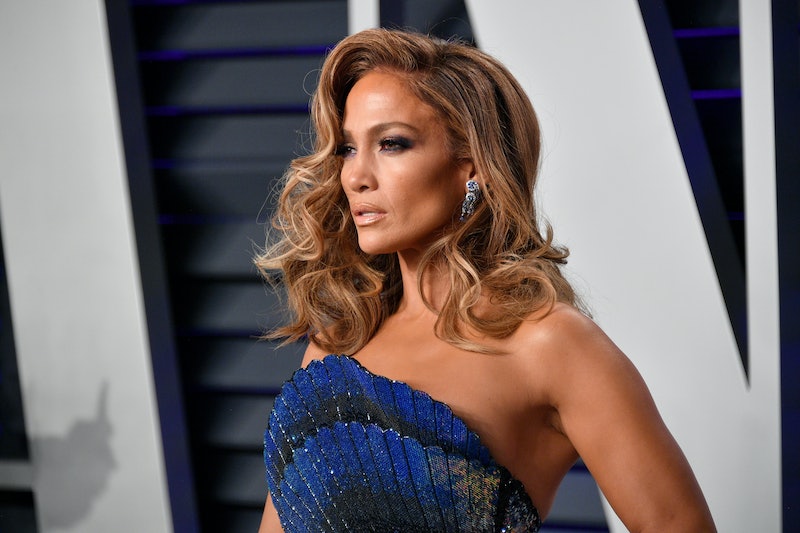 It was quite hard to miss the biggest news of the weekend, but just in case you did, here it is again: Jennifer Lopez and Alex Rodriguez are engaged. The former MLB player officially popped the question on Sat. with what's easily one of the most eye-catching rings in Hollywood. Prepare to obsess over J. Lo's new rock, because it's unlike anything you've ever seen.

The couple traveled to the Bahamas over the weekend for a romantic getaway — and it turned out to be quite a memorable vacation at that. On March 9, Rodriguez got down on one knee to ask for J. Lo's hand in marriage, and the couple revealed the exciting engagement news to the world with the sweetest matching Instagrams.

On Sat., Rodriguez posted a photo of the singer's ring to his Instagram account, writing a short and sweet, "She said yes" — the perfect caption that let the stunning bauble do all the talking. Shortly after, J. Lo shared the same snap (and eight heart emojis) with her 88.5 million followers.

Perhaps unsurprisingly, J. Lo's new accessory is anything but simple. The singer is known for über-glam and glitzy red-carpet moments (just take a peek at her 2019 Oscars dress as proof), so it's only fitting Rodriguez proposed with a truly elaborate diamond.

"J. Lo’s stunning engagement ring from A-Rod appears to feature a 12 to 15 carat emerald-cut diamond in a classic solitaire white gold or platinum setting," Kathryn Money, vice president of strategy and merchandising at Brilliant Earth, shares with The Zoe Report via email. "The elegant simplicity of the ring’s design allows the gorgeous, show-stopping center diamond to be the focal point."

The news of the couple's engagement isn't completely unexpected, though, seeing as the two reportedly bought a condo together in New York City last year. And they certainly haven't been shy about their love for one another, either. Both Rodriguez and Lopez's Instagram page are flooded with heartfelt snaps of the two (and captions that hint at forever).

J. Lo and A-Rod celebrated their two-year anniversary on Feb. 3, so their engagement comes just a few short weeks after a major relationship milestone.

Although Lopez's engagement ring just made its official debut, the fashion-obsessed are already wondering what the bride will wear down the aisle. If her glitzy new bauble is any indication, it's safe to say she certainly won't be opting for a minimalist wedding dress on her special day.