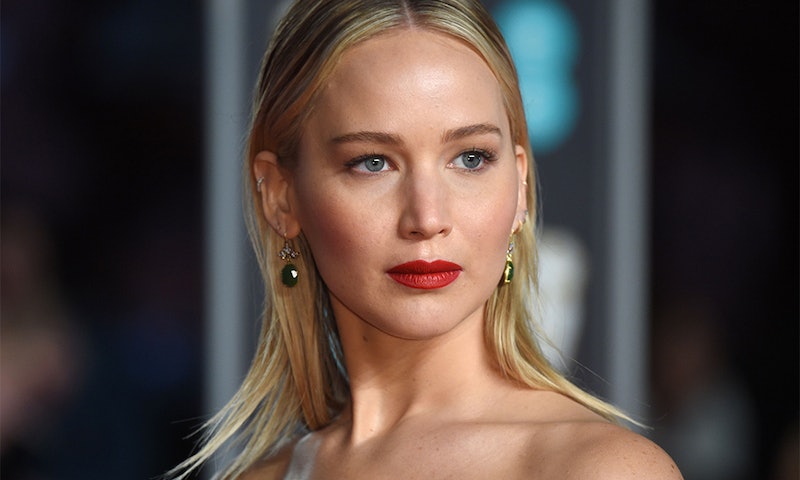 The final leg of fashion month, aka Paris Fashion Week, officially kicked off on Feb. 25, with models and actors alike touching down in France for the last round of shows. Perhaps unsurprisingly, their outfits have slowly started to shift from New York City cool to Parisian chic. But it's Jennifer Lawrence's green beret that demonstrates the easiest, most fuss-free way to infuse your getups with a touch of French-girl charm.

It's likely Lawrence was absent from the 2019 Oscars because she was en route to Paris. On Mon., Lawrence was photographed heading into the Dior headquarters for a fitting ahead of the brand's presentation on Feb. 26. While the actor's front-row ensemble is bound to be pure magic, her casual street-style outfit is already making a strong case for her best look of the week.

The actor is known to keep her getups easy and uncomplicated, typically reaching for her trusty jeans and a simple shirt. And for Mon.'s outing, that's exactly what she wore. Lawrence sported black jeans and a graphic tee, layering up with a uniquely patterned jacket to combat the chilly Paris temps.

The real standouts, though, were the actor's accessories. She carried a dark-blue tie-dye Dior bag in her left hand, subtly showing off her new engagement ring. Lawrence turned to a pair of yellow-framed sunglasses to protect her eyes from the sun, rounding out the look with a forest-green wool beret that was stunning against her blonde hair.

While berets are nothing new in the celebrity street-style world, the actor's pick offers up a fresh take, namely due to its unexpected hue. Black is always a safe choice when it comes to the quintessential French-girl accessory, as is bright red, but green strikes the perfect balance between the two.

So, make like Lawrence and infuse all of your upcoming outfits with a touch of Parisian charm by adding in a beret — preferably in a springtime-approved green hue. Ahead, The Zoe Report's favorites on the market.

Meet the ideal accessory to use whenever you're having a bad hair day. This Reformation beret is made out of 100 percent recycled fibers from post-consumer jeans — pretty cool, no?

If a wool beret is too warm for your climate, try an edgy leather one instead. Wear the accessory with a plaid skirt set, a band tee, or an oversized sweater.

This wool beret is so chic and warm, which makes it a serious accessory win. Plus, it's only $18. Buy it now and wear it all season long.

This Rag & Bone pick is slightly more expensive than the others, but the elevated leather band makes it worth it. Throw it on when you don't want to deal with your hair — it's as easy as that.