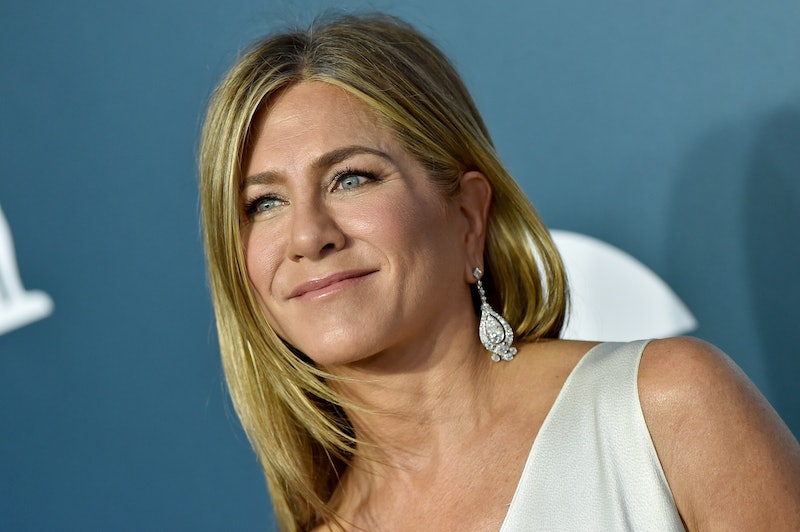 It's been 15 years since Jennifer Aniston and Brad Pitt were a couple, but somehow, even today, the two manage to make headlines. Most recently, the exes made headlines when they participated in a live virtual table read of Fast Times at Ridgemont High. And while a seemingly "flirty" exchange between the two had people talking, true fans of the Friends star were focused on Jennifer Aniston's glasses and overall look during the unrehearsed event.

The epic reenactment, arranged by Dane Cook, featured a slew of famous faces including Julia Roberts, Matthew McConaughey, and Morgan Freeman. However, it was Hollywood's former golden couple that stole the Zoom show. As she read the part of Linda Barrett, who was played by Phoebe Cates in the 1982 film, Aniston made an otherwise casual look oh-so cool. Her denim vest top and bandana neck adornment were complemented by some retro eyeglasses that felt very appropriate for the throwback movie theme. And while her ensemble read very '80s, the actor's hair was classic Aniston, worn straight and just slightly tousled. The look was ultimately likely meant to be a play on her character's persona, but the eyeglasses lent a fresh and fun vintage vibe that can totally be recreated with any fall outfit.

Yes, The Morning Show star was and is the epitome of cool — and she kept that cool even when the table read took what could've been an awkward turn. When it came time for Pitt (who read the part of Brad Hamilton, originally played by Judge Reinhold) and Aniston to recreate the film's famous scene in which Brad dreams of Linda seducing him as she steps out of his backyard pool, Pitt actually blushed during the interaction, while his ex remained nonchalant and calm. “Hi, Brad,” said Aniston in character, changed into a red bikini top work over a white tank. “You know how cute I always thought you were. I think you’re so sexy. Will you come to me?”

This is not the first time the former couple has made headlines from an innocent and unintentional moment. Remember the 2020 Screen Actor's Guild Awards, when the two had that brief hand-holding exchange, and social media feeds essentially blew up with the news? Yes, it seems the world is still collectively mourning the break up of these two super stars, and not-so-secretly hoping for a reconciliation. In the meantime, virtual moments like this will have to suffice.

For those with feet firmly planted in reality who were more interested in Aniston's retro eyewear than the exchange, ahead, shop some similar styles that'll have you channeling the Friends star.