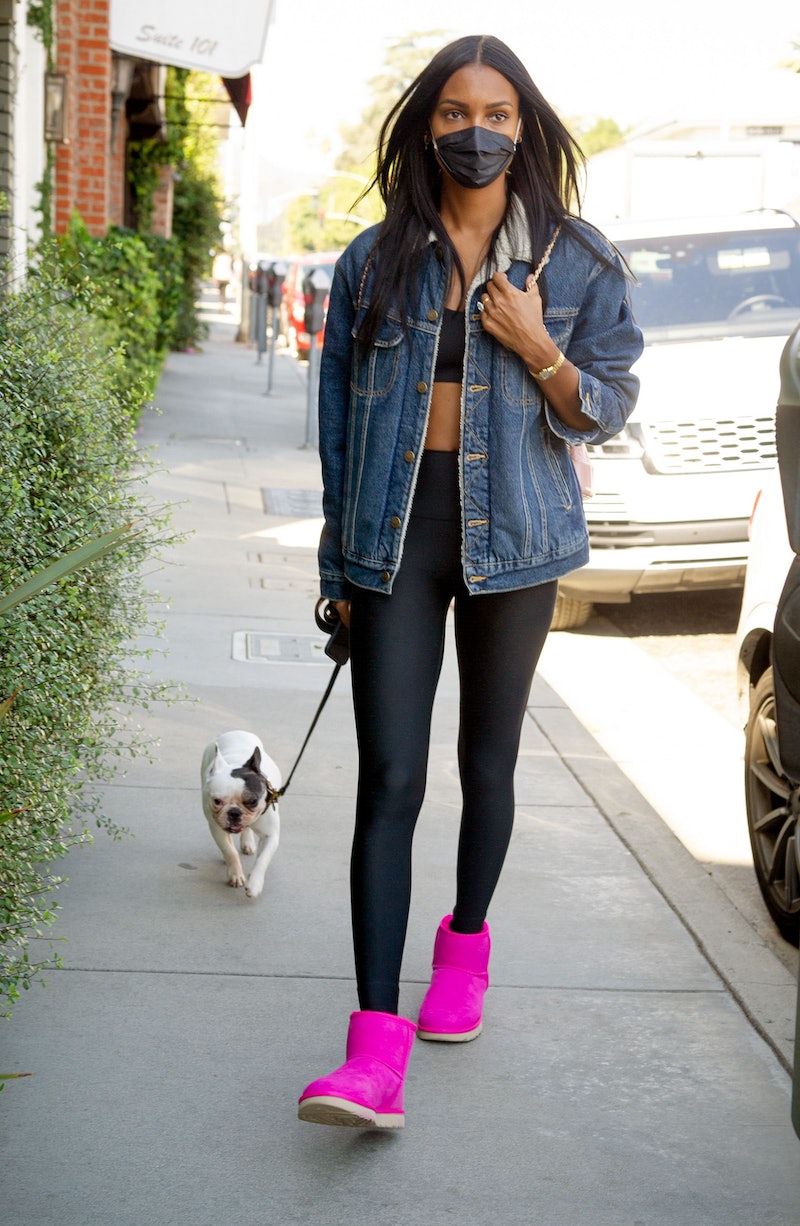 Across changing seasons and shifting trends, fashion insiders are continuing to call on soothing color-ways — powder blue handbags, oatmeal knits, and butter yellow boots, for instance. One of the top mellow color trends making the rounds is pistachio, which first made its debut on Jil Sander and Ryan Roche runways in Fall 2019. Since then, the hue has all but disappeared — and Jasmine Tookes' activewear set is proof that the shade will stick around for the coming fall and winter months. To sweeten the deal, her set in particular is super affordable, the bottom-half of which happens to be marked down right now.

On Nov. 5, the newly-engaged model was spotted out in Los Angeles, where she appeared to have a fitness class on her agenda. This was evinced by her head-to-toe workout look, with track jacket, activewear set, and sneakers in tow. Past her minty green zip-up hoodie, Tookes went with a pistachio green sports bra and pair of matching leggings, which her tonal jacket added a gentle contrast to. From there, she accessorized with Louis Vuitton's Pochette Metis flap bag, and a pair of white mesh trainers. Overall, the entire look offered a striking take on the soothing color trend, with tonal elements shaking up the classically matchy-matchy co-ord.

The co-ord athleisure set is from Neu Apparel, and it retails for just $80 — that is, when it is fully stocked. Right now, just her leggings can be shopped in a few sizes, and the bra is entirely sold out. That said, there are scores of alternates that are primed for nailing Tookes' tonal look, like Girlfriend Collective's agave-hued set and Alo Yoga's olive branch version. As for her zip-up, American Giant has a similar version, and it's available for jut $112.

Ahead, grab Tookes' exact set, including her bra (in a different hue) and her same leggings. TZR's also rounded out an assortment of "like" sets, all of which make getting the look super simple. Shop below: