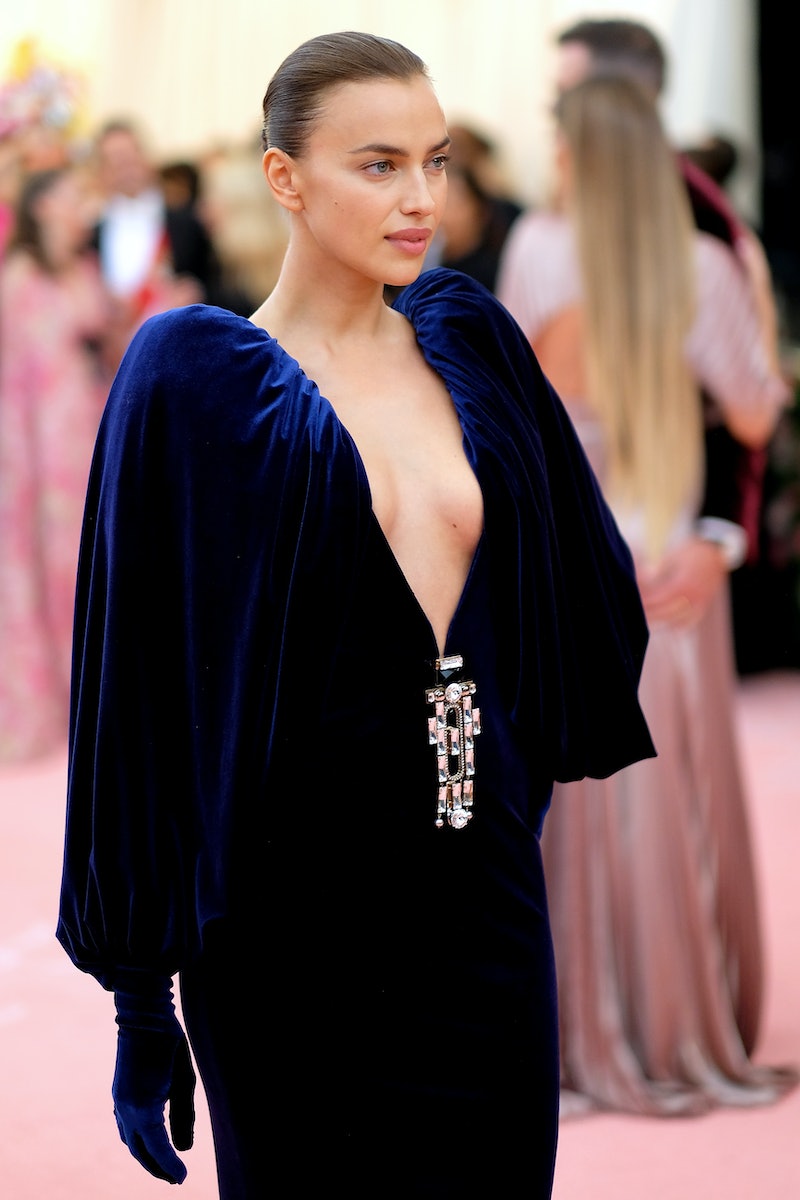 It's no secret that 2019 has been a year chock-full of plenty of controversial (and conversation-starting) fashion crazes. The bucket hat — an early aughts topper that people definitely have opinions about — held its street-style reign all season, thanks to an impressive celeb backing. Chunky, lugged hiking sandals introduced the newest "ugly" shoe trend that made comfort footwear cool again. And finally, the socks-with-sandals look made a case for emulating your dad's style, as did the increasing rise in printed shirts, just like the one Irina Shayk wore for a night out in London.

Models and top tastemakers may have traveled to Milan for the third leg of fashion month, but there are still plenty of standout street-style looks to relish in from London Fashion Week — and if you're getting all caught up, it's likely you missed Shayk's latest evening ensemble. It debuted in England's capital on Tues. night — and it's certainly not the going-out outfit you're used to seeing.

No LBD, blazer dress, or leather pants were in sight, but rather, a shirt dress that appeared to have a butterfly-tiger hybrid print emblazoned on it. Shayk kept the styling fairly nonchalant, with a few buttons open to reveal a black bralette. She rounded out the look with a blazer that features the same bold animal pattern — talk about some good coordination, right?

The finishing touches included Velvet Canyon's Zou Bisou sunglasses, because even though it was nighttime, the accessory is an outfit must-have, a sandal-boot hybrid from Burberry's Spring/Summer 2020 collection, and a sleek brown crossbody bag, also from the British fashion house.

The dad shirt — you know, the printed button-down top that could easily be pulled straight from your dad's warm-weather wardrobe — has been trending for quite some time now, with the likes of Gigi Hadid, Zoë Kravitz, and more sporting variations of it.

But there's something about Shayk's take on the dad-shirt trend that feels particularly, well, chic, and that's because she decided to wear the oversized, printed top as dress. What's more, she also paired it with refined accessories, giving it a more of-the-moment feel.

Itching to give this dad-style trend a try? Do so with The Zoe Report's favorite button-down tops that perfectly double as mini dresses. Shop them all, below.

Wear this printed poplin shirt with the matching shorts for a high-octane look that shows you're not afraid to take a style risk.

Really lean into the dad trend with this short-sleeve shirt. Picture it with black sock booties and glitzy hoops for a night out.

If you want to get in on the dad shirt trend but aren't ready for a super over-the-top take on it, try this Eloquii find.

This Gucci shirt features a one-of-kind print that was actually created by the three artists behind the French company, À Paris chez Antoinette Poisson.

Add this striped shirt to your collection ASAP. Wear it on its own or with bright-red pants that coordinate with the pattern.