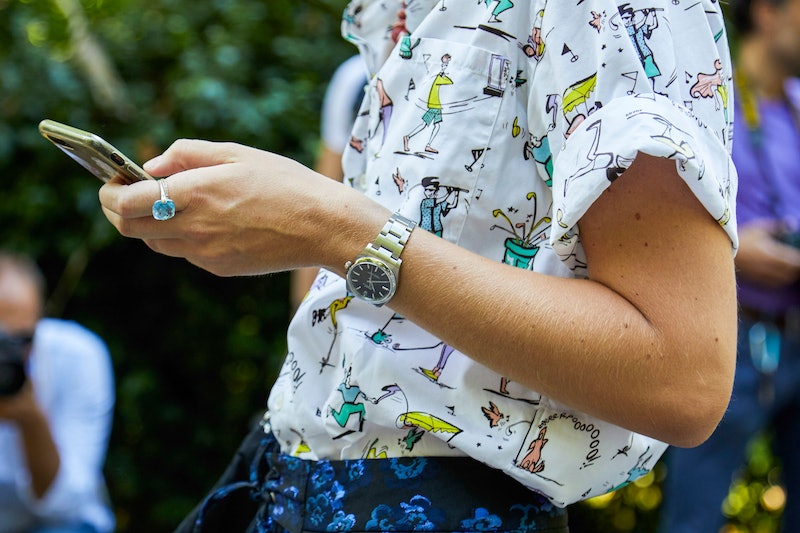 I started therapy eight years ago, following a gut-wrenching breakup. My therapist — let’s call her Carol — quickly learned my relationship cycle: Love someone deeply and wholly, then go into a long period of romantic isolation when it’s over. At a certain point, however, she suggested — even encouraged — the prospect of online dating. I shut it down immediately. Even now, following another major heartbreak, I still feel inherent pushback at the concept. But that’s only part of the reason that after finally giving it the ‘ol college try, I quit dating apps before going on a single date.

Let’s get this out of the way: I don’t judge anyone who chooses to find love online. In fact, I think it’s rather impressive to be able to treat dating as casually as to accept a coffee meet-up or a drink with someone I don’t know and may only be mildly interested in. Instead, even as someone who’s often forced into social interactions in her line of work, I cringe at the thought.

After many years of going through this with Carol, I think I know why I'm so resistant. I’ve had two big loves. I didn’t date at all in high school or college, and I’ve only had a smattering of exclusively platonic male friendships. My experience with the opposite sex is still rather limited for a woman in her thirties, and as a result, my entire romantic history is one of someone who craves — if not expects — the kind of magic you see in movie meet-cutes. You know, reaching for the same watermelon at Trader Joe’s. That kind of thing. For me, online dating felt like giving up on that idea. Not allowing for spontaneity, or perhaps worse, admitting that I couldn’t be alone (something I’ve always taken great pride in). It also triggered a feeling that I wasn’t pretty/young/desirable enough to just pick up the guy of my dreams on a casual grocery run. Was that too much to ask?

And so, knowing this, a year and a half post break-up, I decided it was time to prove myself wrong — or at least challenge the ideas I have about dating by (gulp) signing up for an app. I’d asked around, chosen one deemed less hookup-y (not that the idea of an actual relationship didn’t come with its fair share of scary thoughts), chosen photos that were flattering but natural, and answered the most basic, non-intimate questions of those offered — sweating nervously throughout the entire process.

I spent approximately 30 minutes stress-swiping with countless fears running through my mind. What if the kind of guys I like don't like me back? What if they think I'm too old (even when they're the same age — a sad Los Angeles reality) or not beautiful enough? What if I see my ex or he sees me? I was at once embarrassed, anxious, curious, and skeptical. After that half hour, I had "liked" three guys, all of whom initiated a conversation in response. Okay, I thought, so far so good.

One was instantly too pretentious (I write for a living, thus I'm not impressed with you peppering your word-of-the-day into casual convos). Another kept coming up with excuses for his delayed responses — seemingly genuine ones, but it never went anywhere. The third and I quickly began a fun, flirty little rapport which continued for a few days over text. He liked cats, sent me a Wet Hot American Summer gif, and agreed with me that Arrested Development had jumped the shark once it moved to Netflix. And he told me I was beautiful — something I've never gotten accustomed to hearing. Perhaps online dating had its own version of meet-cutes after all?

Then, after two mentions of hanging out IRL (on his part), the texting quieted down. Eventually he admitted he "wasn't ready to date" and was still "working on some personal issues." Did he not know how much it had taken for me to even get this far? Did he not know how vulnerable a position that was for me? That it would trigger all my initial insecurities about doing this in the first place?

Well, no, he didn't. He didn't know me and I didn't know him. Feeling defeated and disappointed, I tried browsing through the app a few more times after that conversation officially dissolved. But I didn't seem to find anyone who interested me remotely as much — even the little bit I knew of him.

As a lifestyle writer who frequently covers relationship topics, I know what the experts would say: Be more aggressive, go on more apps, reach out to guys who I might not even be attracted to, throw out 100 boomerangs in hopes of getting one back. While I understand that advice, I must admit it doesn't connect for me. I have a nice little life. I happily go to the movies alone, hang out at home with my cats, and have the occasional drink or dinner with a friend. I'm an aunt, a sister, a daughter. I get to do what I love for a living in a city that still excites me after 12 years. I'm lucky. I've loved the relationships I've had and I believe that I'm a terrific girlfriend with a lot to offer a partner. That said, I'm not anxious to push myself into anything that doesn't feel quite right.

I know that my admittedly limited experience of online dating certainly isn't indicative of the practice as a whole, but it did reaffirm what I already suspected: That maybe I'm just not cut out for it. Dating in general is tough enough for me, but there's something so inherently black-and-white, yes-or-no about apps that I could just be too sensitive, too romantic to roll with. And while I now feel ready to accept that my next great love may not start with a movie-worthy moment, I'm happy enough with my life the way it is right now to stay off the apps, sit back, and allow for a bit of unexpected magic — in whatever form it takes.