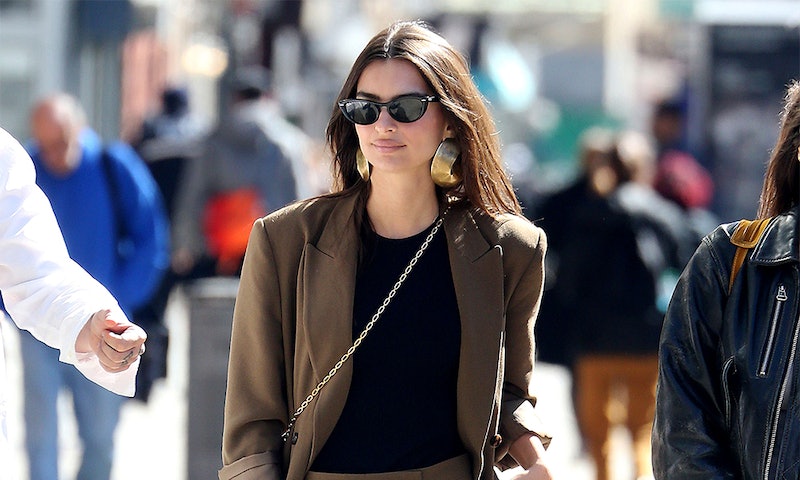 Spring has come bearing gifts, as temps rise and color shifts into focus in the form of freshly sprouted daffodils and newly adopted house plants. Millennial's plant obsession is hard to deny, but there's one springtime phenomenon that will put an even wider smile on your face than a fiddle-leaf fig tree: your inaugural bare-leg moment of the season. As you're scouting a place to house your seventeenth plant child, it's also a wonderful time to take note on how to style bike shorts for the season ahead.

The athletic staple hasn't slowed down since cementing itself as a wardrobe staple in 2018, and city sidewalks and Instagram feeds signal that the moveable basic is a must-have this spring. Though they were mainly paired with athleisure upon arriving on the trend-watch list last year, fashion girls are getting mighty creative when wearing bike shorts outside of their go-to boxing studio.

Let's not forget it was Princess Diana who served those iconic bike shorts and sweatshirt combos back in the '90s, but modern day trendsetters have put a whole new spin on the stretchy staple. Pairing them with everything from strappy sandals to dress shirts, tastemakers have flipped the script on athleisure, proving it can even exist in the office when styled thoughtfully.

Lately, the blazer and bike shorts combo has been a shining favorite among models. Bella Hadid, Kaia Gerber, and Emily Ratajkowski have all made a case for the unlikely pairing, with their various outfit formulas laying out a range of approachable styling ideas. EmRata paired her shorts with a matching sports bra and sneakers for a baseball game in New York City on Weds., while Gerber has opted for a graphic tee and futuristic, high-top sneakers.

The trend came out of left field when Yeezy's fake paparazzi lookbook dropped back in 2017, but it's become way more approachable since then, proving serious staying power thanks to laid-back versatility and comfort. Just like leggings were an undeniable fixture of early 2000s style, bike shorts' time is now, so snag a pair and a complimentary blazer selected by The Zoe Report, ahead.

This plaid option is super similar to Ratajkowski's, and you'll undoubtedly find several smart ways to style it.

The neon detailing on this budget-friendly option adds an extra-sporty touch to offset a blazer.

You'll look like a fresh bloom in this cheerful pale lavender option from House of Holland.

The shiny finish on this faux-leather bike short will add an interesting twist.

Invest in this classic satin blazer that will surely stand the test of time.

Stay in line with the polished vibe with this pinstripe high-rise option.