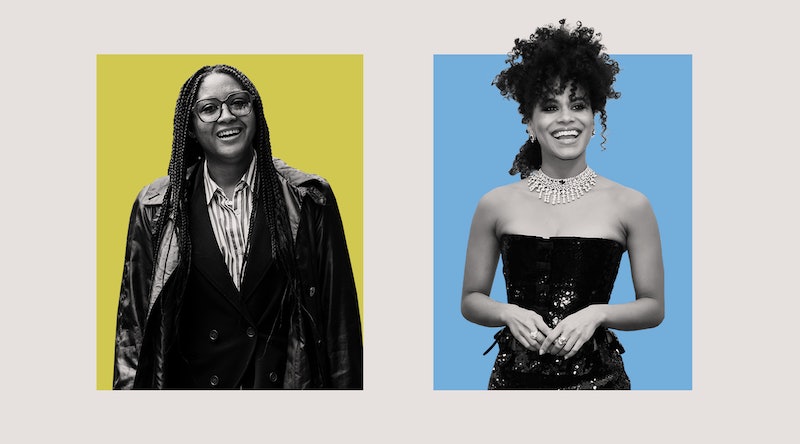 The Zoe Report's Best Dresser is a series that profiles top stylists, diving into everything from how they got their starts in the industry to their proudest fashion moments to date. For this installment, meet Solange Franklin.

"I'm actually pretty shy and quiet," Solange Franklin shares with me followed by a warm laugh over the phone from her home in Brooklyn. You wouldn't guess this. The Iowa native who's dressed the likes of Venus Williams and Whoopi Goldberg exudes the kind of confidence and charisma that can prove difficult to muster for the ordinary introvert. Franklin is no ordinary introvert.

Her career story follows the kind of trajectory that anyone striving to work in fashion would consider aspirational. The self-described "funky femme" stylist grew up in Des Moines and like many midwest fashion-obsessed girls with limited outlets, turned to her imagination for sartorial delight. "Consuming magazines was a primary way I absorbed fashion being from the midwest. I also experimented with fashion through my love of vintage and thrifting that allowed me to think outside of the mall," she says. "Thankfully, that was helpful in developing my voice and vision and experimenting with identity in an inexpensive way. That feeling of wanting to be somewhere else makes you look outside of yourself — that search for escapism."

Franklin eventually headed east and enrolled at Mount Holyoke College, a small liberal arts school in Massachusetts that boasts Emily Dickinson (and Franklin's mother!) as alumnae. She went on to get a job at Teen Vogue as a fashion assistant and about a year later began freelance styling. "I’ve been on my own for almost five years but before that, I worked with Giovanna Battaglia," she says. "I was freelancing and working as her second assistant for some freelance projects. I was eventually promoted to her first assistant and we worked together for around four and a half years." Franklin describes her relationship with Battaglia as a sisterly mentor bond. "She’s spectacular. She's positive and extremely discerning, precise, and whip-smart. It’s not smoke and mirrors."

Franklin's styling work spans several categories, including editorials, advertising, runway shows, celebrity dressing, and special projects. I ask her if any one of these categories is her favorite. "I’m pretty grateful because I really do enjoy most of all the jobs I do," she shares. "The ‘treat’ is certainly when you feel like you get to be creative and collaborative. I thrive off the collaboration." She references her work with Solange Knowles, who performed on a high plain of the Chihuahuan desert at the Chinati Foundation in Marfa back in 2017. "I love that she activates these art spaces. Helping her with that performance is just so far out of the bounds of the training that I have, which is very Conde Nast-y," she laughs.

Franklin doesn't discount her advertising work as a chore to pay the bills, either. "Advertising can still be titillating," she says. "For example, working with Serena [Williams] on her Gatorade commercial — and just the thrill of getting to be side by side with these formidable women."

Franklin's work celebrates multidimensional representations of Black individuals, in large part due to her involvement with decision-making ranging from having a hand in choosing who is being photographed, the clothing on her racks, and opting to work with certain teams. "It's very interesting to have people wake up to what you’ve been doing all along. The realization that you don’t have to do this alone," she shares. "For me, it’s always been that if i’m not serving my vision and my intention then I’m serving somebody else’s. I’ve risked too much to get where I want to be, so anything that takes away from that vision takes it away from not only yourself but your community, too."

Franklin cites black art and literature as her interests outside of fashion that inform her taste in fashion. "The poets and writers that have shaped the canon shape my vision and how I see myself and how I want others to be allowed to be seen," she says. "That amalgamation allows me to be unrestricted, anything that’ll spark creativity."

I look for the thing that’s going to center my subject with a vibrant assuredness.

Franklin describes her styling aesthetic as vibrant assuredness. "You try to think a client is hiring you because of your aesthetic or vision or voice so I think it’s a disservice to erase myself in order to be what the client has previously done," she explains when I ask her about bigger jobs with clients who might be less flexible. "I look for the thing that’s going to center my subject with a vibrant assuredness. I want to have an impact and there to be life on the page — or the pixel, I guess."

One of her recent styling jobs prior to the pandemic was simultaneously a big career moment: The Oscars. "Certainly something I’ll tell my grandkids about is doing my first Oscars," she says. "I dressed Zazie Beetz for presenting and worked on a custom look for that. That was really special."

Franklin was also named one of twenty American NEW WAVE creatives by the British Fashion Council in 2019. "Floored! I don't work for accolades but to be seen and recognized by the peers that you respect... it’s just humbling for a little girl from Iowa the fact that another country would be thinking her work as worthy," she shares. "It's flattering and exciting."

Like most others, the Coronavirus has turned work — especially in-person styling — on its head. But Franklin's outlook on the future isn't so bleak; she sees market demands shifting and her skillsets as pivotable. "It might end up being similar to the change from print to digital. There were radical changes when that happened but a lot of the formulaic ideas of what is interesting to people and worth publishing remained the same," she explains. "Maybe it’s more about the creative direction. That’s something that’s already part of the stylist's job that isn’t as much of a direct callout but certainly incorporated. It might be about consolidating some roles in the future."

Until that time comes, Franklin continues to empower herself and others with clothing, whether it's a piece from Christopher John Rogers (a favorite designer of hers) or pair of yoga leggings from Stella x adidas. "I'm definitely somebody who uses clothing as armor so the second I get inside my home, I strip and relinquish the armor," she laughs. "In terms of being home, it’s repetition and comfort in a way that isn’t slovenly but is about being in my body. I think that’s the mood people are in right now for wellness and survival; it’s about being in your body."